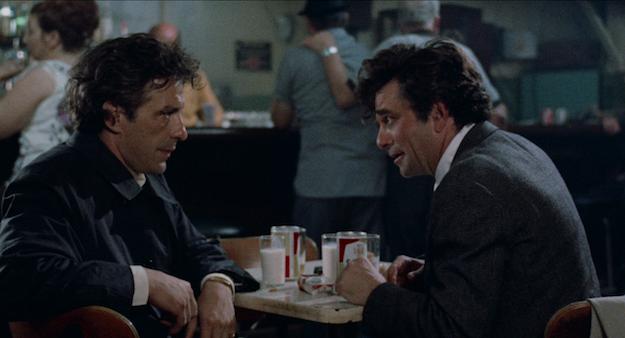 Mikey and Nicky stars John Cassavetes and Peter Falk as low-level gangsters in the Philadelphia mob. Released in 1976, this rough-and-tumble, character-driven film has the potential to be mistaken for one of actor-director Cassavetes's auteur projects. Closer examination makes it clear that this is an Elaine May flick through and through. Although her directing output is relatively tiny, her hallmarks are obvious. A fascination with betrayal, coupled with a cynical but clear-eyed depiction of male behavior, is as evident here as it is in her first film, A New Leaf, or in her last film to date, Ishtar.

But one can be forgiven for making the mistake of thinking this was a Cassavetes picture, since Mikey and Nicky depends so much upon the friendly machismo and not-so-friendly one-upsmanship between Cassavetes and Falk's characters. Their dynamic here is not too different from Husbands, for example. (The streetwise camerawork here is also by Husbands DP Victor Kemper.) One key difference is that Cassavetes seems to revel in his characters' bad behavior, looking for the humanity in the worst of his creations, but May is unblinking. Sure, she'll forgive a little, but come on.

The plot of Mikey and Nicky is essentially a rambling odyssey across after-hours Philadelphia. Cassavetes is Nicky, who is paranoiacally certain that his boss (played by acting godfather Sanford Meisner) has sent someone out to kill him for a dumb, penny-ante rip-off. Falk is Mikey, there to calm Nicky's nerves. Mikey is also there to double-cross his old friend, trying to lure him into the path of Ned Beatty's frumpy hitman.

The problem is that Nicky won't sit still. Either because he is genuinely disturbed, or because he sniffs out Mikey's plan, Nicky keeps sending the pair of them off on different wild goose chases. As soon as Mikey makes a call to let the hitman know that they're going to a late-night movie, Nicky decides to make a detour to see his mother's tombstone. And so on.

That's the plot, but the meat of the story is the ongoing tumult between these two life-long friends. We see Cassavetes snake-charm Falk into abandoning his mission, and then they're old pals all over again. The actors' genuine friendship can't help but inform their work, which results in an effortless reality. We feel the sting when almost immediately after their reconciliation, Nicky makes fun of his friend. Even worse, Nicky traps his girlfriend Nellie (Carol Grace) into a weird psychosexual encounter, where he demands that Mikey hit on her, in the name of "sloppy seconds." Nicky humiliates them both and shows us exactly why Mikey would agree to have him killed.

In response to her poisonous male characters, May doesn't attempt to create "strong" female characters in the reductive way that most current film commentators prescribe them. Nellie might be a victim of Nicky, but May doesn't view her as a prop or a flat character. Her reactions and her anguish are full-blooded and fully realized. The same with Nicky's estranged wife, Jan (Joyce Van Patten), who has done her best to cut this macho asshole out of her life, only to succumb a little bit to his wayward charms when he comes crying for help. These women don't simply stand up for themselves, because that would be phony and uninteresting in the toxic world that May is evoking. She doesn't need to solve the problem onscreen to diagnose it.

Mikey and Nicky is May's only non-comedic effort as a director (apart from some solid chuckles here and there), and it is probably her most fully realized film. There's a dark inevitability to Mikey and Nicky's respective fates, but the tragedy of this film comes in the revelations of love, hurt, and anger methodically uncovered by May's storytelling throughout the course of its runtime. Fans of Cassavetes and Falk's work from this era will certainly be interested in Mikey and Nicky, but even viewers who can't stomach something like Husbands might find this film a fascinating response. May doesn't shy away from her characters' boorish behavior, but she doesn't forgive it freely. Maybe boys will not always be boys. 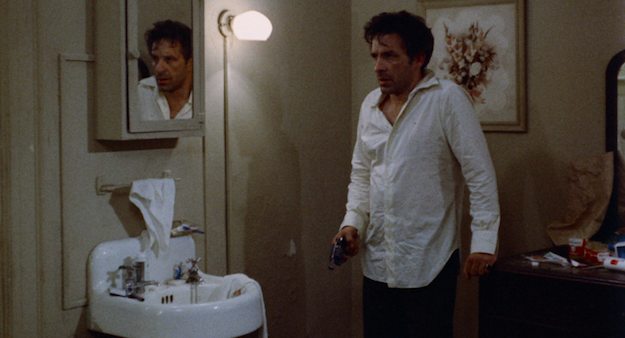 The Blu-ray
Mikey and Nicky is packaged with a fold-out featuring an essay by Nathan Rabin.

The Video & Audio:
This is a film that isn't built to look or sound like most films. It has a rough, pseudo-guerrilla flavor that means it's hard to judge in a traditional way. Based on what this viewer can presume about the filmmakers' intentions, the AVC-encoded 1080p 1.85:1 video and the LPCM mono audio presentations are outstanding. Visually, there's strong color, fine detail, and depth, while some shots still look dark and grainy or even out-of-focus. Similarly, the soundtrack has no major damage or digital noise issues, even the mix has a documentary flavor that sometimes makes the dialogue a little tricky to make out.

(HD, 14:39) - Distributor Julian Schlossberg and actor Joyce Van Patten talk about their experiences with Elaine May, in the making and release of this film. Schlossberg mentions that the film was drawn from May's own experiences, coming from a "connected" family in Philadelphia.


Final Thoughts:
Mikey and Nicky is a scrappy little movie that has kicked around repertory screenings and gathered dust on DVD rental shelves for years. Hopefully, with the muscle of this Criterion Collection release and the slow-spreading awakening to Elaine May's brilliance as a film director, Mikey and Nicky will find greater esteem -- and, more importantly, a bigger fanbase. DVD Talk Collector Series.