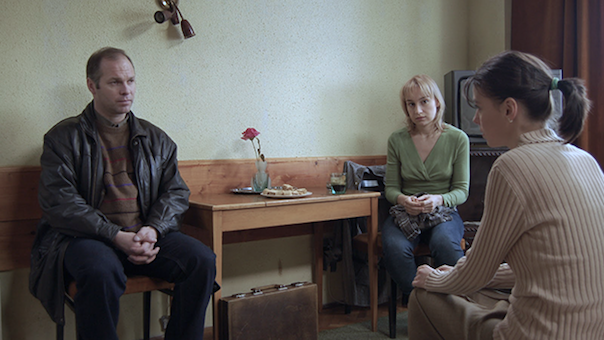 NOTE: The images accompanying this review are promotional stills and do not reflect the quality of the Blu-ray under review

Following up their excellent releases of Cristian Mungiu's Beyond the Hills and Graduation, the Criterion Collection now offers a stellar Blu-ray of Mungiu's harrowing international breakthrough from 2007, 4 Months, 3 Weeks, and 2 Days. Along with The Death of Mr. Lazarescu and 12:08 East of Bucharest, 4 Months... is one of the foundational films of the Romanian New Wave, a movement characterized by its spareness and often painful realism.

Set in 1987, near the end of Nicolae Ceaușescu's oppressive presidency, the film concerns an illegal abortion. It's not really an "issue" movie, though. The harrowing hotel room abortion at the center of the film is presented by Mungiu in the context of a social order out of whack. Bureaucrats and black marketeers abuse their little scraps of power, which allows some huge injustices to manifest alongside the dozens of small ones that Romanians of this era faced every day.

University student Otilia (Anamaria Marinca) agrees to help her roommate Gabita (Laura Vasiliu) through her abortion. Instantly, it is apparent that Otilia is a take-charge kind of person, and that Gabita is not. Gabita is more than willing to let someone like Otilia do all the heavy lifting on her behalf, a trait which backfires on both young women.

Taking place over the course of one day, Mungiu's film is concise and specific, but it reverberates with implications about its time and place. When Gabita fails to secure a room at the hotel that the man who will perform the abortion has demanded, Otilia is stuck in a series of conversations with uncaring desk clerks who could not care less about whether they find this potential customer a room. Well-conditioned movie viewers might just see this as interesting dramatic complication, but there's an inescapable sense that Mungiu is using these interactions as a microcosm of the Romanian national character. Abused by the bureaucracy of the system, these clerks pass along this smaller abuse as a pastime. Otilia is finally forced to take a more expensive room at another hotel; she "tips" the clerk with a pack of black-market foreign cigarettes.

Sadly, the abuse is far from over. The abortionist is Mr. Bebe (Vlad Ivanov), and he is not a well-meaning do-gooder in the Vera Drake mold. He's out for himself, like everyone else. He uses the details that Gabita did not follow his instructions properly and that he is willing to risk prison time for this abortion as leverage to take advantage of Otilia and Gabita. He's such a cold and practiced manipulator that he makes blackmail not seem like blackmail at all. The hotel room scenes with these three characters are the dramatic centerpiece of the film, but the tone is never hyperbolic or melodramatic. Mungiu and the actors keep the ugliness which unfolds here grounded in the everyday.

In the second half of the film, Otilia leaves Gabita alone in the hotel room to meet up with her boyfriend Adi (Alexandru Potocean) for his mother's birthday. This becomes the rancid icing on the whole rotten cake. Otilia is forced to sit at dinner, surrounded by oblivious party guests, blathering about politics and the vapidness of entitled youth. Mungiu's camera watches as Otilia becomes detached from her surroundings, unable to even connect, let alone find an outlet to discuss the horrific trauma to which she has just been exposed.

There are moments in 4 Months... that suggest a psychological thriller -- the discovery of a knife, the sudden appearance of a strange man on the street -- but Mungiu is clearly more interested in ordinary horrors than the kind dreamed up by screenwriters. It can be a tough film to watch, not only because of what it depicts, but because the performances are so good that the effect is just too crushingly real. This is not just an exercise in miserabilism -- the thoughtfulness and craft of this production make it a provocative must-see -- but I wouldn't eagerly pop this in at the end of a bad day. 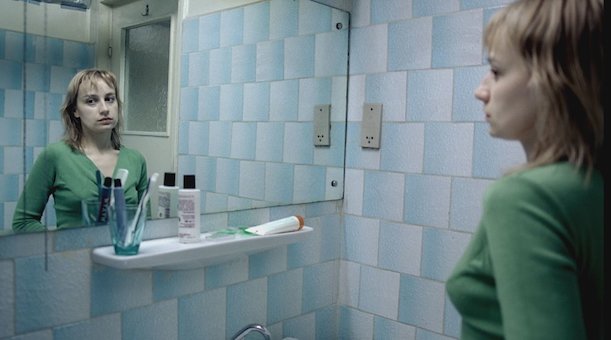 The Video:
The AVC-encoded 1080p 2.35:1 transfer boasts excellent clarity and depth. Colors are somewhat blue-gray and desaturated, but with enough subtlety that it never feels unnatural. Contrast is strong, with a deep black level.

The Audio:
The Romanian DTS-HD 5.1 surround audio (with optional English subtitles) is fairly spare -- no music, as is director Mungiu's habit -- but effectively immersive.

(HD, 37:15) - The writer-director describes how the film developed from an anecdote he had been told, and how it slowly percolated in his mind for years before he knew how to make it. He talks about how the visual style of the film developed -- clumsily at first -- and how he tried to put the performances above all other elements.


Final Thoughts:
More than a decade since its Palme d'Or win at the Cannes Film Festival, this Romanian New Wave drama is still shockingly potent. Criterion's presentation is excellent as always. Highly Recommended.