Night Is Short, Walk On Girl, The 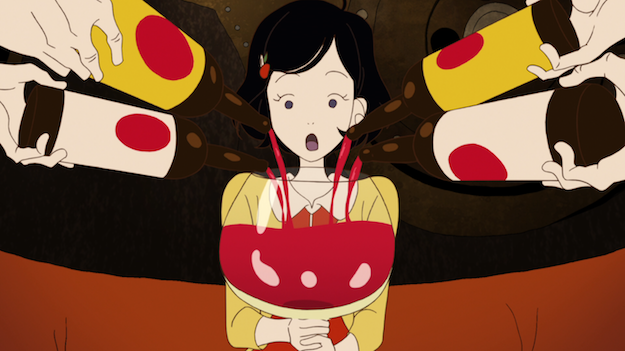 On a whim this past summer, I went to see The Night Is Short, Walk On Girl at the movies, knowing only that it was a colorful and odd-looking anime. It turned out to be one of the year's most pleasant and unusual surprises. Now on Blu-ray from GKIDS and Shout Factory, the film has lost none of its charm or power to befuddle.

Night Is Short is directed by Masaaki Yuasa (Mind Game, Lu Over the Wall), and it is based on a graphic novel by Tomihiko Morimi (whose Tatami Galaxy, considered a spiritual cousin to this story, was previously made into a series by Yuasa). In the supplemental interview on the disc, director Yuasa says that the original book featured four sections set in different seasons, but he decided to just cram everything into one long night. As such, the film is chock full of quirky happenings that seem wildly disconnected but somehow (to this viewer's eyes, at least) hang together in a satisfyingly silly way.

Our protagonist, known only as the black-haired girl, or sometimes Otome ("maiden"), is a young college student who decides to spend a night in the city, looking for her first taste of the adult world. This set-up brings to mind any number of '80s comedies where a fish out of water must brave the big bad city for one crazy night, but Otome's chipper, goofball attitude makes this feel more like Amélie than After Hours. Otome may encounter drunks, perverts, demons, and gods over the course of her night, but the only real danger she's in, is the danger of unexpectedly falling in love.

You see, there's this older boy, known only as the Senpai ("senior"), who has been intentionally popping up wherever Otome is and pretending he didn't plan it. The hope is Otome will think it's fate, and she will fall in love. Over the course of this night, Senpai's attempts at wooing-but-not-wooing are continuously thwarted in sexually embarrassing ways. At one point, his pants and underwear are stolen, and when he runs into Otome, she gives him a knuckle sandwich for being a flasher (she earlier dished out another fist to the face to a friendly older man who got a little too handsy).

That's the general gist of this thing, but it's mostly a collection of wacky episodes and mini-quests. The film starts with a prolonged pub crawl, revealing Otome's heroic ability to hold her liquor (more than the sex stuff, concerned parents reading this might want to keep their younger anime fans away from this flick just for the way it romanticizes alcohol all out of proportion; in the real world, Otome would be choking on vomit by the film's 15-minute mark). Eventually, she competes to see who can drink the most of a certain ultra-rare spirit, created accidentally by screwing up the recipe to a better known beverage. She hunts through a rare book fair, looking for a childhood favorite, and is corralled into playing the romantic lead in a roving street theater piece written by a man who hasn't changed his underwear in one year. At one point, she also wins a jacket/backpack that looks like a giant carp.

Night is Short applies the principles of hellzapoppin'/gag-a-moment storytelling found in classic Looney Tunes cartoons, then it melds that approach with a hodgepodge of tones and styles that only amps up the surrealism. The fever-dream climax is animated in a graphic style that suggests German Expressionism on 'shrooms. Also, if you're hoping for an extended rock opera interlude, the film has got you covered.

Needless to say, Night Is Short, Walk On Girl might perturb those viewers who prefer A-to-B storytelling from their flicks. Viewing this now a second time, it's interesting to see the way that Yuasa and his screenwriter Makoto Ueda thread certain story points throughout the film. But on first blush, it's chaos. You've got to be willing to take the ride, laughing all the way. 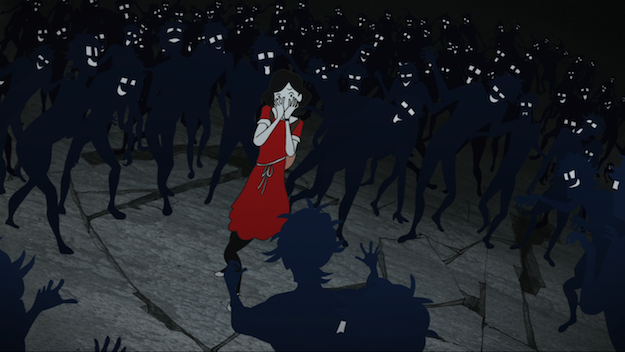 The Blu-ray
The Night Is Short, Walk On Girl is presented in a Blu-ray/DVD combo pack. Both discs contain the same features.

The Video:
The AVC-encoded 1080p 1.78:1 presentation is bright and colorful, with no major compression issues. On a few shots, I noticed some stair-stepping on some of the character outlines, but otherwise this is a spot-on reproduction.

The Audio:
A fairly busy Japanese DTS-HD MA 5.1 surround soundtrack (with optional English or French subtitles) that keeps the dialogue and effects well-defined against the typically peppy musical score. The brief rock opera section is particularly well-supported. Also, the frenetic climax was played so loud when I saw it in the movie theater, that it started distorting; here, it's nicely balanced while remaining properly (melo)dramatic.

(HD, 6:35) - The director talks about re-teaming with many of his Tatami Galaxy collaborators for this film, and how he views the characters.


Final Thoughts:
This is the wildest and wackiest flick you missed last year. Traditionalists may sniff, but fans of outlandish animation and comedy will love it. Highly Recommended. 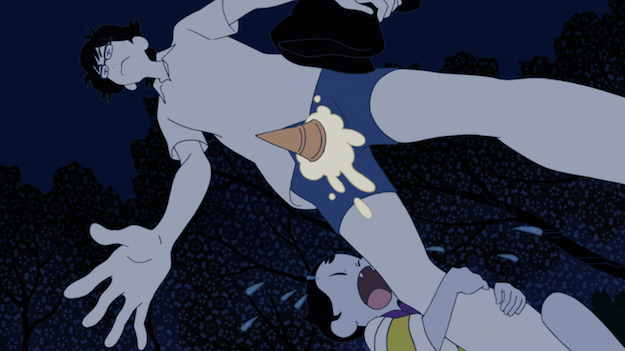