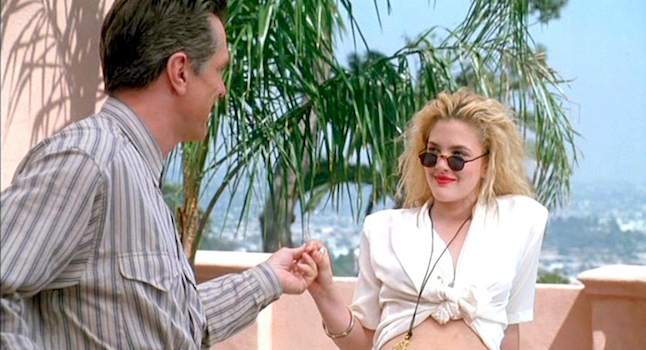 NOTE: The images accompanying this article are taken from various online sources and do not represent the quality of the Blu-rays under review.

The Poison Ivy films were a staple of '90s video store shelves, when one of the most important production values in a rental was T&A. In the cold harsh light of 2019, the series mostly looks dated and silly -- although the first film (the only one to play in theaters) arguably stands out as a remarkably solid hunk of pulp that got lost in the erotic thriller glut of the post-Fatal Attraction era. Shout! Factory has collected all four (yes, four!) entries in the series (in both R-rated and unrated iterations, for the first three) in a no-frills package that will prove nostalgic for a certain subset of video store patrons. 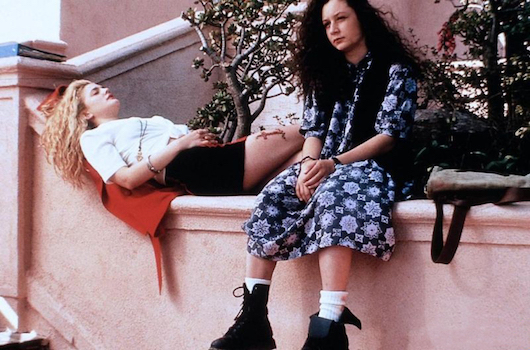 ) deserves to be viewed as an actual movie and not just as late-night cable filler. Made by then-husband-and-wife team Katt Shea (writing and directing) and Andy Ruben (writing and producing), the film feels like the work of exploitation filmmakers trying to make good. Shea and Ruben made a handful of flicks for Roger Corman, such as Stripped to Kill, so they know what sells; in this case, it's Drew Barrymore in her post-rehab, still-vaguely-dangerous Little Girl Lost era.

What's most refreshing, however, is how much of this ostensible erotic thriller is devoted to building an unusual teenage female friendship -- albeit one that goes inevitably awry. Barrymore is the low-class wild child who becomes a minor obsession of withdrawn trust fund goth Sara Gilbert. Realizing their shared misfit status (and maybe a burgeoning sexual attraction too), they become fast friends. Gilbert's character nicknames Barrymore "Ivy" based on a floral temporary tattoo on her thigh (a detail the later movies seem to forget). Ivy soon impresses Gilbert's parents, terminally ill mom Cheryl Ladd and pompous TV station manager dad Tom Skerritt. It doesn't take too long for Ivy to try to secure a more permanent place in their luxurious house by plotting to seduce dad and replace mom. The cast has surprisingly strong chemistry, which sadly dissipates somewhat in the film's more cartoony final third. It's an imperfect product, but one that shows more thought and effort than what comes next. 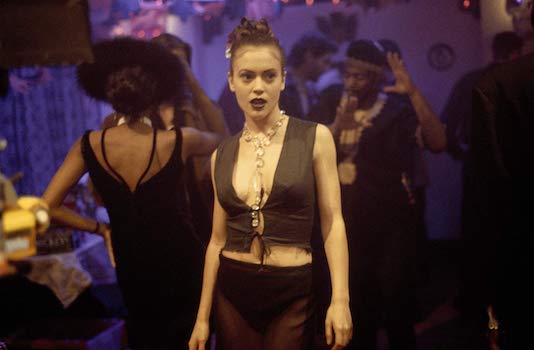 Alyssa Milano was in the midst of a career revamp when she signed on for Poison Ivy II: Lily (1996;

). No longer the little girl of Who's The Boss?, Milano was proving her womanhood (sort of) in decidedly racier material, such as 1995's Embrace of the Vampire. Like that film, Lily is directed by Anne Goursaud, who edited for Francis Ford Coppola and Bruce Beresford before getting into the director's chair for an episode of Red Shoe Diaries, which seems to have dictated her aesthetic from there on out.

Where Poison Ivy feels like a real movie, Lily feels like a well-cast but uninspired and overlong Red Shoe Diary. Milano is suburban-bred art student Lily, who moves to L.A. for college. In her dorm room, she discovers the diary of a girl named Ivy (which logically cannot be the same Ivy as the first movie, since we know she never went to college, right? Eh, who cares?). The diary is full of confessions about seducing and manipulating men, which serves as inspiration for Lily to loosen up. She falls for iconoclastic sculptor Johnathon Schaech and starts posing nude for her skeevy art teacher Xander Berkeley. Unlike the antiheroines of the films that bookend this one, Lily becomes a homewrecker almost on accident -- which is frankly a less interesting choice. In fact, Lily is such a distinctly softcore film that most of its plotting seems concerned with getting its characters nude or into sexual situations, rather than creating dramatic tension. This wouldn't be so bad, if any of the intended titillation did its job, but instead the sex scenes are flat and blandly choreographed. Milano and Schaech make an appealing couple; it just would have been nice if there was a better -- or, barring that, a hotter -- film built around them. 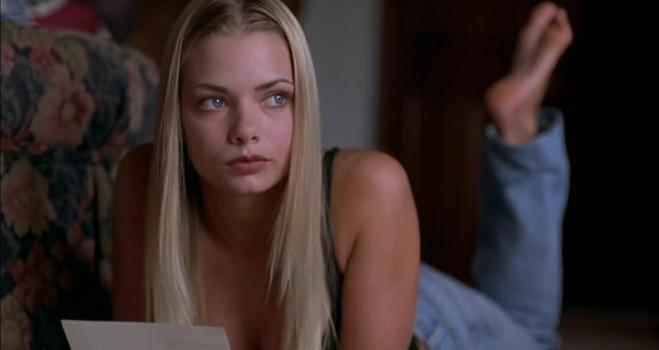 Heat is one area where the series' third entry, Poison Ivy: The New Seduction (1997;

), genuinely excels. Frequent Allison Anders collaborator Kurt Voss is behind the camera this time, and he seems unafraid to cut loose with some trashy, sexy, campy fun. While Lily might have "known what it was" in an under-achieving, we-gave-you-nudity-what-else-do-you-want? sort of way, The New Seduction amps up the salaciousness and ridiculousness, basically remaking the first film without a whiff of pretension.

Rather than casting a celebrity, The New Seduction offered a breakout role to future My Name Is Earl star Jaime Pressly. She plays Violet, Ivy's sister (ignoring the details that, in the first film, we never heard about a sister and the character wasn't actually named Ivy). Violet decides to wreak seductive revenge upon the wealthy family that ruined the life of her housekeeper mother, by dropping back in now that she's turned 20 and hot. Michael Des Barres is no Tom Skerritt when it comes to haughty dads ready for takedown, but he suits the hammier style of this entry. Apart from Forbidden Zone's Susan Tyrrell as the nosy new housekeeper, the other supporting players are a bit bland. It doesn't really matter, since Pressly vamps it up so wickedly that she demands full attention at all times. Like the first film, this one goes off the rails at the end, but delightfully so. 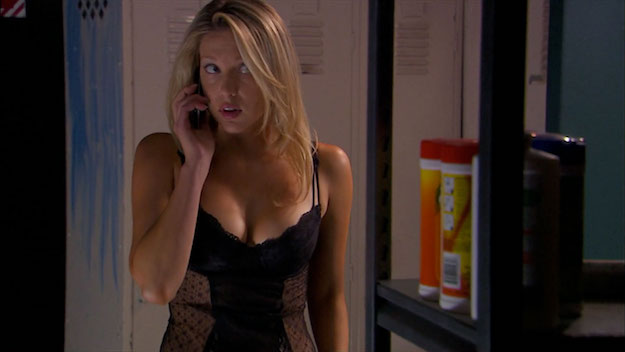 )... What the hell is this? Eleven long years after The New Seduction comes this weird installment bearing the Poison Ivy brand and a protagonist with a flowery first name (this time it's Daisy), but nothing else to tie it to the series. Instead, what we have here is a one-dimensional Lifetime TV movie (literally) about a naive young woman who goes to college and becomes entangled in the titular secret society. Of course, the cut included here features 5 minutes (give or take) of nudity not shown on Lifetime, which is intended to magically turn a chick flick into a dude flick. The Secret Society is so thin and silly that it's not for anybody, actually, except maybe for curators of Bad Movie Nights. 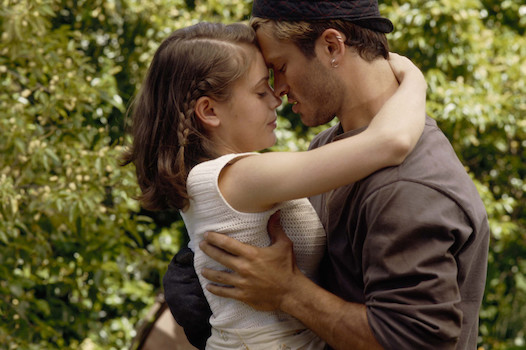 The Blu-ray
The Poison Ivy Collection comes housed in a standard-sized case, with each of the 4 films on its own disc, resting on back-to-back hubs. The keepcase is protected by a cardboard box sleeve. The first three films are presented in either their R-rated or unrated versions, although the unrated moments are sourced from inserted SD material. The fourth film is only available in its unrated home video version.

The Video:
New Line clearly did not bother to scan new masters before they sent this material to Shout! Factory. The AVC-encoded 1.85:1 transfers (Secret Society is 1.78:1) look pretty soft and faded in general. Minor dirt and damage, but generally stable. The first film looks the best of the batch, but just by a hair. This is made most apparent when the SD cut-ins show up in the unrated versions. The visual difference is most dramatic in the first film, while it's almost seamless in the soft and murky Lily. Secret Society was shot digitally, but in a flat soap-opera style that makes it look no better than its celluloid sisters.

The Audio:
The quality of the DTS-HD MA 2.0 stereo soundtracks is about in line with the video transfers. The first film has a slight edge on the later films. It all sounds fine, if unremarkable. An English SDH option is provided for each film, although the transcriber frequently goes overboard in describing every nuance of the musical score. At one point, a score cue meant to inspire dread is identified by the subtitles as "(dreadful music)."

- Director Katt Shea is interviewed by author C. Courtney Joyner. The discussion includes not only anecdotes about this film, but about Shea's whole career.


Final Thoughts:
As a whole, the Poison Ivy series is inessential. Shout! Factory's 4-disc collection is bare-bones and unpolished, so this release really only caters to those who have a lingering nostalgia for '90s era straight-to-video fare. The first film is surprisingly solid and worth a look on its own. The third film is campy, wicked fun. The other two are skippable. If you have a weakness for this sort of release, this collection comes mildly recommended. But most viewers can just Rent It. 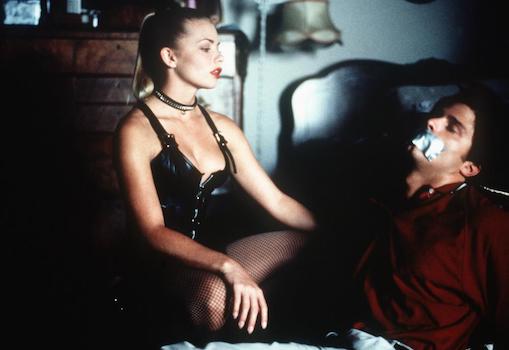