To Sleep with Anger: Criterion Collection 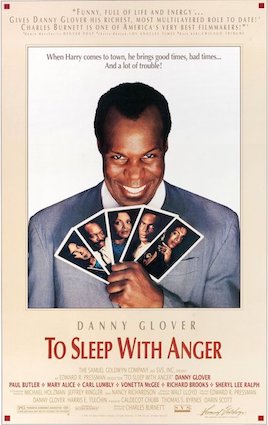 Charles Burnett made a startling filmmaking debut in 1977 with Killer of Sheep, an unpolished gem of poetic realism that conjured the day-to-day struggle of lower-middle-class family life for African Americans in South Central L.A. That it took thirteen years for Burnett to direct a film that got a (relatively) mainstream release -- 1990's To Sleep with Anger, newly issued on disc by Criterion Collection -- speaks not only to the filmmaker's stubborn desire to create films how he wants to make them but also to the film industry's general confusion about what to do with Black indie cinema.

It also speaks to the undeniable appeal of the film's star and co-executive producer, Danny Glover, who was instrumental in getting this film made -- and seen. Glover was hot off the first two Lethal Weapon films, in which he plays a tough but put-upon family-man cop. Glover's role in To Sleep with Anger is light-years away from Lethal Weapon's affable old-timer, but it relies on his likability to insinuate himself into the good graces of viewers, as well as the film's other characters, before the tables are decidedly turned.

Glover plays Harry, a flesh-and-blood man but also a trickster of the kind frequently found in African-American folklore. Burnett uses the flavor of magical realism to intensify the stakes of his domestic drama. Harry arrives on the doorstep of Gideon (Paul Butler) and Suzie (Mary Alice), a welcome face from "back home" who was passing through and needs a place to rest. Gideon and Suzie don't hesitate to offer him a place to stay, but it doesn't take too long for Harry to reveal himself as less a Southern gentleman than a con man, a scoundrel, and an altogether bad influence.

Harry's presence intensifies the long-simmering tensions in Gideon and Suzie's family, especially the rivalry between their adult sons Junior (Carl Lumbly), the dutiful older son, married to fellow do-gooder Pat (Vonetta McGee), and Babe Brother (Richard Brooks), who is easily distracted and self-involved, married to the similarly self-involved and decidedly middle class Linda (Sheryl Lee Ralph). Babe Brother becomes an all-too-willing protégé of Harry, getting drunk and violent, and thinking about messing around. In a telling development, the women of the family come to their senses about Harry much sooner than the men.

As if there weren't enough tell-tale signs, Harry's stay causes Gideon to become deathly ill with a mysterious sickness that renders him essentially comatose for weeks. In the interim, Harry takes over the house, inviting over forgotten friends from the bad old days to further exploit the family's hospitality. Soon enough all those simmering tensions are brought to a dramatic boil, and you'd better believe that nasty looking knife that Harry carries around makes a crucial appearance (although admittedly, it's probably not in the way that you'd suspect).

To Sleep with Anger delights in unexpected ways, with its idiosyncratic rhythms and tensions, its sometimes bright and sometimes dark sense of humor, and its specific and real characters, brought to life by a tremendous cast (which also includes legendary character actors Ethel Ayler, Julius Harris, and Davis Roberts, among many others). It's an ingratiatingly unusual film from one of the most unusual and uniquely gifted filmmakers of the 20th Century. 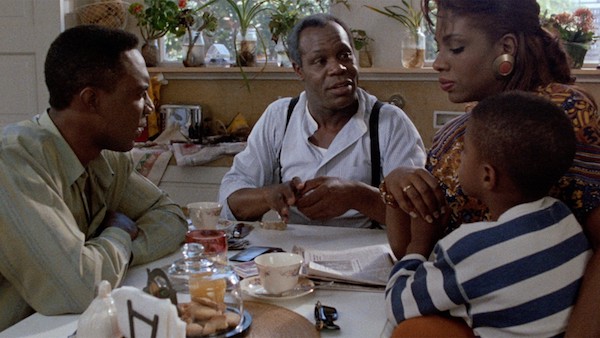 The Blu-ray
To Sleep with Anger comes packaged with a fold-out poster of Charly Palmer's expressive cover art illustration, with an essay by Ashley Clark on the opposite side.

The Video:
Sourced from a 4K restoration, this AVC-encoded 1080p 1.85:1 transfer is simply perfect. Walt Lloyd's cinematography echoes the low-budget simplicity of Charles Burnett's earlier films with a little more polish. This transfer preserves the style without getting in the way, offering rich colors, strong depth and clarity, and well-resolved film grain.

The Audio:
Similarly, the DTS-HD MA 2.0 stereo soundtrack is beautifully preserved, sounding as good as one would ever expect it to sound. It's not a flashy sound mix, but one that subtly blends dialogue, music cues, and atmosphere to support the emotion of the scenes. An optional English SDH track is the only subtitle option.

(HD, 23:55) - A new retrospective talking heads segment that cross-cuts interviews with director Charles Burnett, associate producer Linda Koulisis, and actors Danny Glover and Sheryl Lee Ralph. It's a swift and informative retelling of the making of this film.

Final Thoughts:
There's no film like this. Charles Burnett's style and approach to storytelling is steeped in traditions that precious few filmmakers have attempted to explore. His work is also so pure and personal that it can't help but resemble nothing else. Needless to say, that makes To Sleep with Anger a welcome addition to the Criterion Collection, and needless to say, Criterion has done a beautiful job restoring the film for home video. DVD Talk Collector Series. 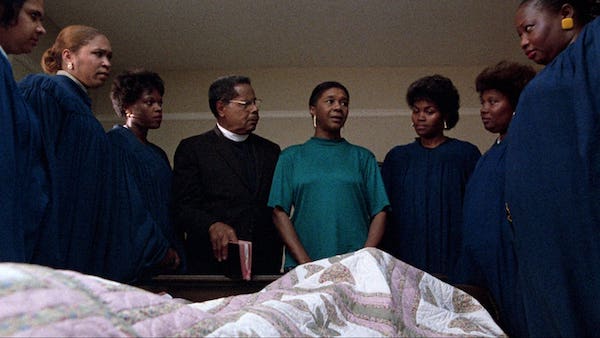