Mill Creek // PG // March 26, 2019
List Price: $14.98 [Buy now and save at Amazon]
Review by Stuart Galbraith IV | posted April 22, 2019 | E-mail the Author
Good news and bad news. Sheena (1984) turns out to be a far better film than its reputation would suggest but, alas, Mill Creek's new, budget-priced Blu-ray release is pretty awful, offering a video transfer that's not much better than standard-def DVD.

Based on the Will Eisner-Jerry Iger comic book character, debuting in 1937, the movie bombed at the box-office and received mostly scathing reviews, including five "Golden Raspberry Award" nominations. But the film isn't at all the campy, gooey mess I was expecting. The director, John Guillermin, had previously helmed two of the very best Tarzan films, Tarzan's Greatest Adventure (1959) and Tarzan Goes to India (1962), and his work on Sheena adopts a similarly, resolutely sincere tone and a real sense of grandeur. Sheena is not a failed attempt at camp; rather, it's a straight-faced jungle adventure/fantasy with moments of humor, more on the order of Richard Donner's Superman (but not really the sequels).

Guillermin clearly was an influence, as his approach so resembles his two marvelous Tarzan films, but the writing source is a bit murkier. Leslie Stevens (of Outer Limits fame) and David Newman, one of Superman's many writers, are credited with the story, and Newman seems to have taken the first stab at the screenplay, while Lorenzo Semple, Jr., was brought in to rewrite it. Semple's reputation, derived especially from his campy scripts for Batman (the ‘60s TV version) and the film Flash Gordon (1980) perhaps added to this misconception.

Sheena might have worked better if it were 20 minutes shorter than its 115-minute running time, but it has many assets. Even stars Tanya Roberts (A View to a Kill) and Ted Wass (Curse of the Pink Panther) are surprisingly spot-on in their portrayals. 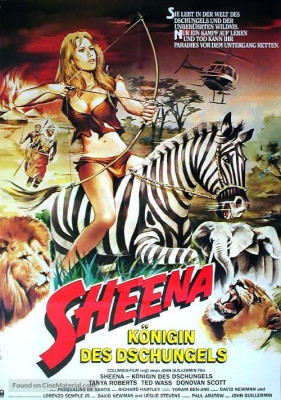 Investigating the miraculous healing powers of the soil from the sacred Gudjara Mountain in tribal Zambouli land, a protected territory of the (fictitious) African nation of Tigora, geologists Philip and Betsy Ames (Michael Shannon and Nancy Paul) are killed in a cave-in, leaving their blonde-haired toddler daughter, Janet, an orphan. The tribe's Shaman (Princess Elizabeth of Toro, genuine African royalty) is actually delighted, as she believes the child, whom she names Sheena, is actually a deliverer foretold by the gods.

Years later, the now adult Sheena (Roberts) has developed a telepathic affinity with her animal friends, riding a zebra and usually with an elephant, rhino, and chimpanzees in tow. Meanwhile, at the royal palace, reporter Vic Casey (Wass) and his cameraman, Fletch Agronsky (Donovan Scott) arrive to do a story about Prince Otwani (Trevor Thomas), a retired NFL player, and younger brother to King Jabalani (Clifton Jones, of Space: 1999). However, Otwani is conspiring with his lover, the sadistic fiancée of the King, Countess Zanda (France Zobda), to have the honest king assassinated, and to pin the crime on the now-ancient Shaman.

In the months preceding the release of Superman (1978), that film was heavily advertised with the tag "You will believe a man can fly," a subtle plea to the movie-going public to suspend disbelief, to accept the more outrageous facets of the Superman mythology. Director Richard Donner certainly realized that's what the film required, as did the film's star (if not in billing), Christopher Reeve. Conversely, today's superhero movies are, for the most part, rooted in an unsavory jadedness. Their fantastical elements are commonly met, not with a sense of awe, but rather a cynical wisecrack, sometimes from the hero him- (or her)self. Only the photorealism of their CGI-enhanced effects allows us to accept them on some level, and there's never enough time to contemplate what incredible things are happening to the characters, what's taking place, as if the filmmakers are terrified of being scoffed at.

In one of the later Johnny Weissmuller Tarzans, Tarzan and the Huntress (1947), poachers threaten to capture and remove hundreds of animals in a kingdom, so Tarzan finds a simple solution, calling all the animals to cross a river and enter his domain, allowing them to find sanctuary in his part of the jungle. It's a basically absurd concept, but on its own terms even this lesser Tarzan has that one really outstanding, even moving sequence.

Sheena operates on a similar level. Her telepathic abilities with the animals are pretty out there, yet if the audience simply accepts this her rescue of the Shaman from prison, using her pet elephant to bulldoze the jail, her chimps to wreak havoc on the guards, etc., makes for an exciting, very satisfying sequence.

As he did with his earlier Tarzans, John Guillerman finds a balance between these fantasy-driven moments and the exotic beauty of the Kenyan shooting locations. (Pasqualino De Santis, one of the great Italian cinematographers, shot the film.) Richard Hartley, best-known for his long association with Richard O'Brien (on The Rocky Horror Show, etc.), gives the picture a Chariots of Fire-like musical score, effectively mixing synthesizer and orchestral elements that give the film both majesty and otherworldliness.

Tanya Roberts's steely-blue eyes indirectly compliment her sincere performance, adding to the idea that she views the civilized world with a combination of confusion, distrust, and fascination, but grounded in her own, clearly-defined if remote part of the jungle. Wass's character is, initially, the stereotypical wise-cracking reporter, but he quickly comes to embrace Sheena as the Real Deal, becoming part of her world rather than the other way around. Wisely, the script never has his character trying to impose anything like male dominance, and throughout the story she's forever saving him.

Licensed from Sony, this originally being a Columbia Pictures release, Mill Creek's new Blu-ray is, unfortunately, a mess. Filmed in 2.35:1 Panavision, the image lacks sharpness and, in once deep the jungle, appears out-of-focus. On my projection system, I found myself constantly checking the machine's test pattern to make sure the fault wasn't at my end: surely it can't look this bad. Occasional steady medium close-ups will look okay, but in layman's terms the image is too dark and too fuzzy throughout, with digital artifacting everywhere, particularly in scenes crowded with jungle foliage. The 2.0 DTS-HD Master Audio fares better, with some decent surround and other directional effects, the musical score comes off reasonably well. Optional English subtitles are provided on this Region "A" disc.

No supplements unless one counts the amusing packaging, a retro design emulating the look of a worn VHS rental copy, complete with "Please Be Kind, Rewind" sticker.

Sublicensed older Columbia titles usually look great, even those released by budget label Mill Creek. It's hard to say who's at fault for the poor video transfer, but on big screens especially it disappoints, doubly so as Sheena turns out to be an unjustly maligned, decent little jungle-fantasy. Rent It.