VCI // PG // March 12, 2019 // Region 0
List Price: $29.95 [Buy now and save at Amazon]
Review by Stuart Galbraith IV | posted April 24, 2019 | E-mail the Author
During the late 1960s and early ‘70s there was a surge in partly-American financed movies shot in the Philippines, most of the best of which were directed by Filipino Eddie Romero and produced and/or starred onetime AIP heartthrob John Ashley. Romero was a respected filmmaker within his own country, helming several highly acclaimed films unseen in the U.S. But he also enjoyed steady employment from American producers looking to make cheap movies there. The Scavengers and Terror Is a Man (both 1959), were among the first he made in collaboration with Hollywood-based producers, but Romero really hit his stride beginning with Brides of Blood (1968), a horror film starring John Ashley. Though cheap, Romero's direction brought to the film many genuinely creepy, uniquely Filipino approach to horror cinema.

Ashley enjoyed his "working vacations" there, and got along very well with Romero, to the point where they decided to team up and produce their own movies under the banner Four Associates. Beyond Atlantis (1973), a goofy fusing of Treasure of the Sierra Madre and cheap jungle movies like She Demons (1958), had a slightly higher budget ($200,000-$250,000) and targeted a wider audience. Reportedly the picture was originally to have more violence and nudity, but American distributor Dimension Pictures wanted a PG-rated family film, upped the budget a bit, and cast Patrick Wayne and George Nader, modest but familiar name actors. Then again, some advertising for Beyond Atlantis still cite an "R" rating, and it's hard to imagine a family picture that practically opens with a pimp (Sid Haig) demanding money from his hookers.

VCI's new Blu-ray, reportedly a 2K master from the original camera negative, is disappointing. The color timing is off - blues look good, but most everything else has a yellowish-green tinge, and the image is soft and murky, never resembling projected film. 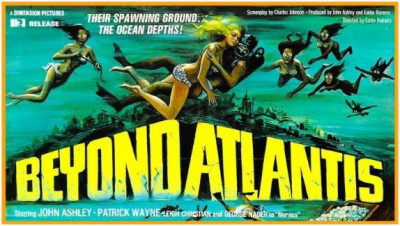 A fisherman, Manuel (Filipino film mainstay Vic Diaz), drops fur bikini-cad beauty Syrene (Leigh Christian) off on the shore of a remote island, she paying for her transport with several huge pearls. She and her father, Nereus (George Nader), lord over the natives, who all have pop-eyes like ping pong balls, perhaps distant relatives of the Killers from Space (1954).

Manuel sells the pearls to East Eddie (Sid Haig), a local pimp and bookie trying to expand his modest criminal empire. Believing there's more where that came from, he enlists the aide of longtime resident Logan (John Ashley), a chronic gambler and hustler deeply in debt to East Eddie. They hire Vic Mathias (Patrick Wayne), who owns a boat and scuba-diving business, while archeologist Katherine Vernon (Lenore Stevens) decides to tag along, disinterested in the treasure hunt but anxious to find and study the lost tribe.

On arrival, Nereus and Syrene are unexpectedly welcoming, if cautiously so, offering to help the party find more pearls, mainly because Nereus wants Syrene to "mate" with Vic in order to perpetuate their dying species of aquatic humans, capable of breathing underwater.

Beyond Atlantis - I'll say, considering it's set in the middle of the Pacific - is not the kind of movie general audience were ever likely to embrace. But for those, like this reviewer, with a fondness for cheap Filipino exploitation pictures, it's reasonably fun if at times wildly absurd. Exemplifying this is the presence of fan favorite Sid Haig, the towering bald, pock-faced actor who has a sizable role here, playing a sleazy low-level hood who nonetheless projects a natural if edgy charm. One particularly amusing scene has him falling into a pit filled by the natives with crabs. "Get them off of me!" Haig screams and, once out of the pit, he reflexively begins wildly shooting them with his handgun.

By contrast top-billed Patrick Wayne is pretty colorless, if serviceable, though John Ashley in films like this shows he was a better actor than he was generally regarded - even if some of his lines are obviously cribbed from Humphrey Bogart's part in Treasure of the Sierra Madre. Vic Diaz, the Peter Lorre of the Philippines, was a decent actor and appropriately Lorre-esque here, and Eddie Garcia, another Filipino film regular, turns up as Vic's First Mate.

Leigh Chistian is blandly attractive, but Lenore Stevens, later the wife of actor Richard Mulligan, is appealing as the female scientist. George Nader, whose first starring role was the notorious Robot Monster (1953), was part of the Rock Hudson-Jeff Chandler-Tony Curtis roster of ‘50s stars at Universal-International, but reportedly sacrificed by the studio when Confidential magazine threatened to "out" his good friend Hudson; Nader was outted instead. Nader moved to Europe, becoming a star there, particularly in the hit series of West German-made "Jerry Cotton" not-quite spy films. Beyond Atlantis was his last film appearance.

As noted above, VCI's 2K mastering of Beyond Atlantis, reportedly from the original camera negative, is nonetheless pretty tepid, with strong blues but otherwise weak color-wise with a strong, greenish-yellow dominating. The image is unaccountably soft and smeary, never film-like, and contrast is mediocre. Fumbling about in the dark, I mistakenly began watching the film on DVD, that version also included, before realizing I had inserted the wrong disc. The Blu-ray is an improvement, but not much. The PCM 2.0 mono audio fares somewhat better. Optional English subtitles are provided on this region-free disc.

Supplements include an audio commentary track by Howard S. Berger and Andrew Leavold that delves pretty deeply into the nuts and bolts of Filipino filmmaking. "John Ashley Remembered" is a good featurette derived from Mark Hartley's 2010 documentary Machete Maidens Unleashed, with amusing and insightful comments by such people as Haig, Romero, Wayne, producer Sam Sherman, actress Gloria Hendry and others. A trailer, narrated by Paul Frees, and a video-presented Press Kit round out the extras.

The Blu-ray is pretty poor and the film will interest only hardcore Filipino exploitation fans, though it is a very modest bump up from earlier home video versions. Rent It.