One of the first movies to take on the "reality TV" craze, 1999's Kolobos arrives on Blu-Ray via Arrow. It's a little-seen movie but has its fans, and the concept seemed interesting enough- five young people (3 girls, 2 guys) answer a want-ad to appear in a "groundbreaking experimental film," living in a large house filled with video cameras recording their activity, but being a horror movie things start going wrong shall we say. One of the film's two directors got the idea watching "The Real World," thinking how annoying everyone on it was and how the show might be improved if they were suddenly killed off. 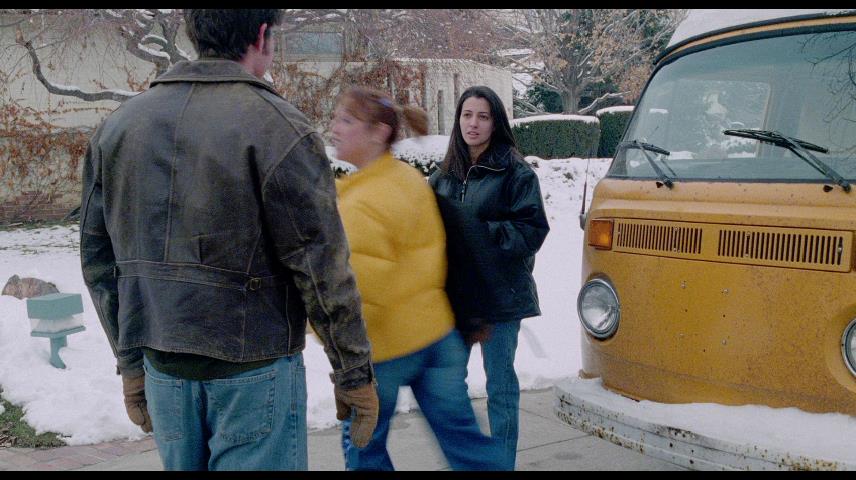 The story is told in flashback, which was done to pad the running time after the initial footage didn't run long enough for a full movie. Kyra (Amy Weber) is found in an alley and brought to a hospital, where she's stitched up. She has several cuts on her face and arms, and the doctors suspect they may have been self-inflicted. "Kolobos" is the first word they hear from her. The movie then flashes back to the call for participants and the lucky winners driving up to a large two-story house in the country (Nebraska, to be exact.) This feels like the standard slasher-movie setup- Kyra sees a faceless figure in the window before going in, and it's soon revealed that she lives at a halfway house and is working on a few mental issues. One of her hobbies is drawing, but much of her work is gruesome scenes which freaks the others out a bit. After meeting the producer of the whole affair (Jonathan Rone) who lays down the rules before heading out to his remote video control room, our subjects start bonding in the living room watching a series of bad horror movies in which Erica (Nichole Pelerine) had played the killer. The real fun begins when Tina (Promise LaMarco) heads into the kitchen and suddenly gets her stomach sliced open by a flying saw blade- it turns out that the house has been set up with a number of deadly traps. As the others run for the door, they find that the entire house has covered itself in metal plating (the effect isn't quite done perfectly) and trapped them inside.

It doesn't even occur to them to try any phones in the house, or to try just sitting tight for a while- instead they half panic and half look for a means of escape while finding not only more automatic traps but also a strange figure roaming around, intent on doing at least some of the killing himself. Since Kyra already isn't quite right in the head, she wonders if all of this is really happening or just her imagination. The others know her mental condition also and soon suspect that she's behind all the bloodshed. By this point the movie just became silly to me and nothing could redeem it, but its admirers like how it borrows elements and atmospheres from Dario Argento's movies. Perhaps if this had been shot somewhere in Europe and in any language other than English, it would feel like a better movie than it does. It's been considered "ahead of its time" for the whole angle of the house being filled with cameras, but that almost seems to be forgotten before the movie ends. 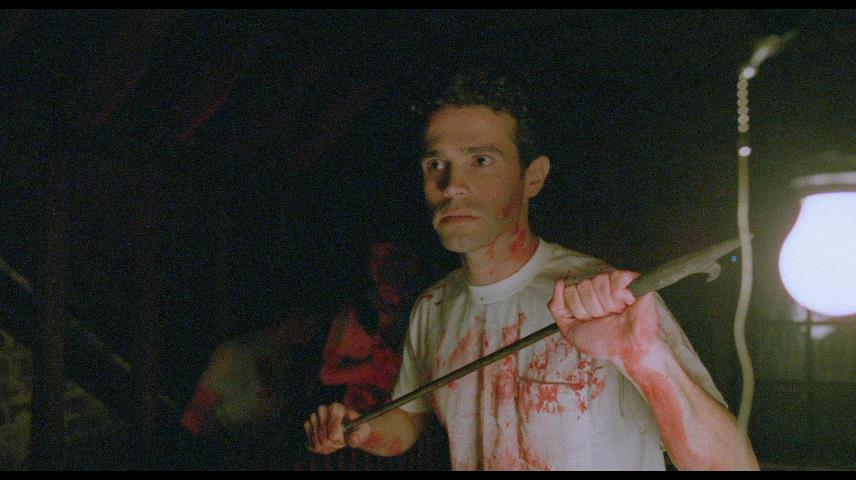 Arrow does their usual great work here, presenting a clean print of the movie in a 1.85 ratio. Focus is perfect, with intentional film grain and somewhat bright colors. Aperture plates sometimes show up on the left and right but those have been left as-is which I prefer, rather than reframed to hide them. The movie's limited budget certainly shows, but the film elements themselves are first rate.

The Blu-Ray includes two audio mixes. Unfortunately the 5.1 mix in DTS Master Audio sounds botched, as the dialogue is always heard in ALL channels, front and rear. This gets pretty distracting after a while with many words being hard to make out, and I doubt this was intentional. The sound effects and music are still placed properly. Unfortunately I don't have any of the previous DVD releases of this movie to compare, which also included a 5.1 mix which was said to have been very good. There's also a matrixed surround mix in 2-channel PCM, which was pretty impressive on my system and almost made up for the bad 5.1 track- the score for audio here wouldn't have lost as many points if this had been the original mix with the 5.1 done later for this disc. Voices remain properly centered on this track, and the surrounds are used quite effectively. Some sound wanders from the left to right rears decoded through the new "Dolby Surround" standard, even though it's likely intended to only be decoded the old-fashioned way with a single rear channel. Simple hearing-impaired subtitles are included. 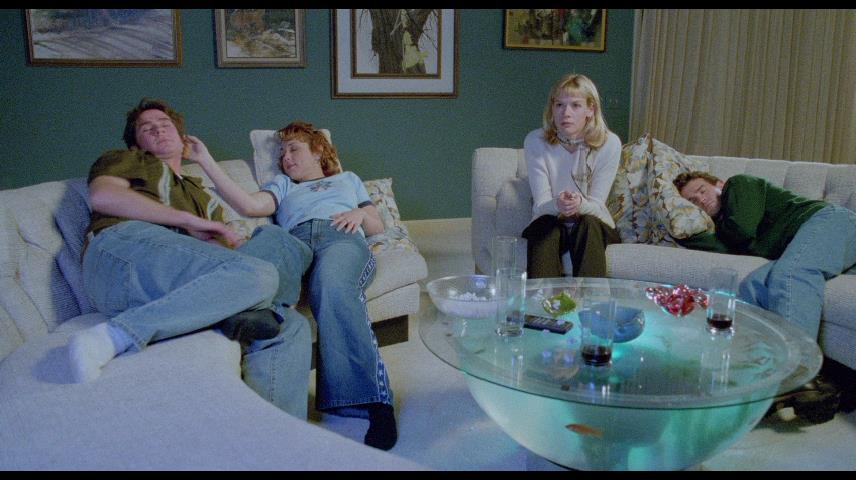 Arrow includes a good amount of extras, which made me appreciate the movie a bit more than I did initially. A commentary track with directors Daniel Liatowitsch and David Todd Ocvirk has them recount the experience of shooting the film and keeps a mostly humorous tone throughout- they laugh at the less than stellar acting and special effects. A 22-minute piece on the making of Kolobos gives further insight and recollection on the movie, along with short pieces with Ilia Volok who plays the "Faceless" killer and music composer William Kidd. The cheesy original video-based trailer is included along with one for a special 15th anniversary screening in New York- and the video intro from the two directors shown at that screening is hidden, viewable by hitting the Right arrow while this trailer is selected on the menu (or you can just manually select Title 10). Footage from another screening done last year is also included where fans profess their admiration of the movie and others who attended give their impressions afterwards. Even though I still don't think of this as a great film, these extras at least convince me enough that there's good reason for some to like it.

The real treat here though is a short film shot by Daniel Liatowitsch at age 12 on Super 8 film in Switzerland, which he says was misplaced for several years but then found in plain sight when straightening up and then given a hi-def transfer. It's about a few kids who form a rock band to impress the girls at their school (the whole thing is in German with optional English subtitles.) Liatowitsch even does a commentary track for it, mostly talking about how he was in love with a girl who appears in it and told him that someday he would make it as a filmmaker. 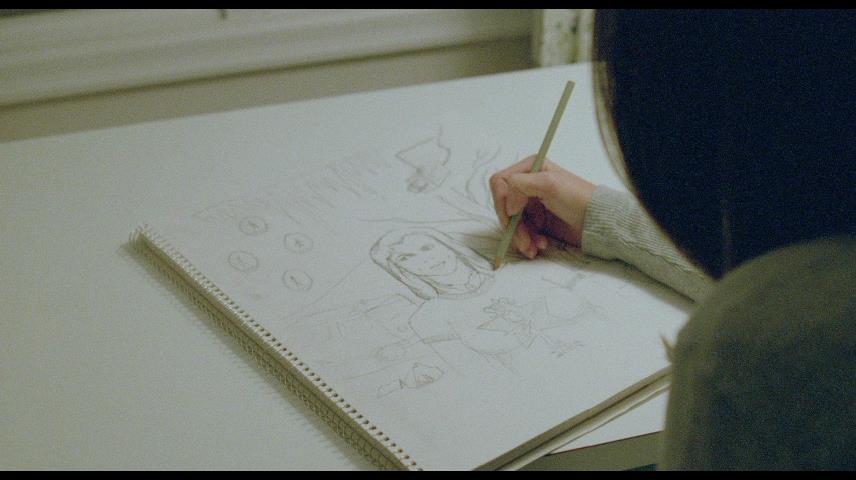 Kolobos still doesn't feel like a great film to me, even though the extras here make a case for thinking more highly of it. Its fans should appreciate the treatment given to it by Arrow, but I'm still giving this a rent it for everyone else- maybe you'll see more in it than I did, but that'll be for you to decide.