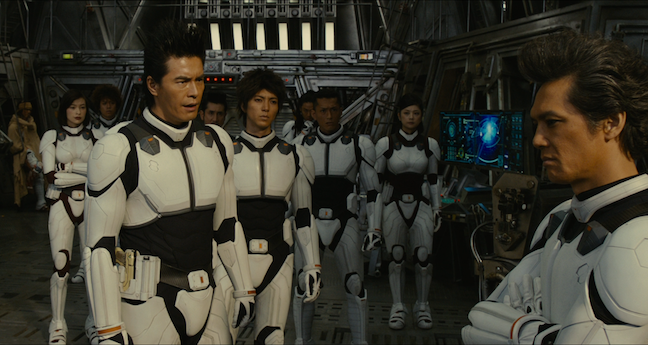 Cinema's hardest working genre madman, Takashi Miike, is the director of the expectedly nutso 2016 manga/anime adaptation Terra Formars. This bizarre cinematic blend sources its ingredients from movies like Blade Runner, Aliens, Starship Troopers, The Fly, and any number of Mars fantasies (but let's pick John Carter for fun), adds some secret spices from Miike's creative cupboard, then serves them up as a slightly overcooked but mostly tasty mash.

It's the late 26th century. Somehow humans are still alive on Earth, but it's overcrowded and nearly uninhabitable. The Japanese government has sent expeditions to Mars to make it habitable for humans, but in the process, cockroaches have overrun the planet. A hipster mad scientist recruits a bunch of criminals to take care of extermination, but withholds a few minor details before the trip.

The largest reveal (ha ha) is that the cockroaches have become huge. They are not only human size, but they are humanoid in appearance and act like roided-out killing machines. (At one point, a character asks why the roaches would want to kill them, and she is told that humans kill roaches without significant motivation, so why not vice versa?) But never fear, the humans have been surgically turned into hybrids that can access insect abilities with the quick injection of a drug. The plan is simple: fight human-like bugs with bug-like humans.

The giddy joy of Terra Formars comes from seeing the humans at its core transform into freakish beasties and do battle, and sometimes from seeing them unceremoniously offed before getting to do anything cool. (*Semi-spoiler*: One can't help but think Miike took perverse pleasure in not only killing the character played by Rinko Kikuchi, famed Oscar nominee for Babel, early in the film but doing it offscreen while other carnage is happening.) Miike is deft enough at audience manipulation that certain deaths come with slasher movie satisfaction while others are shocking and sad. The mixture of CGI and gooey practical effects makes the fighting appropriately visceral.

The script adds plenty of twists to keep things churning, but many of its convolutions don't pay off. One can't help but admire the ambition to overstuff the picture with ideas and insane spectacle, but sometimes overstuffed is just overstuffed. Viewers in the mood for over-the-top thrills and buckets of blood/goo won't be disappointed -- just maybe a bit worn out.

The Blu-ray
The first printing of the disc comes with a collector's booklet featuring a liner notes essay by Tom Mes.

The Video:
It's what you'd hope for from a new (presumably digitally shot) movie. The AVC-encoded 1080p 2.39:1 presentation has great detail, contrast, and vibrant color. It handles fast action wide shots and still close-ups with equal effectiveness. No noticeable compression issues.

The Audio:
A robust and propulsive Japanese DTS-HD MA 5.1 surround mix (with optional English subtitles -- a few phrases are spoken by characters in English and they are not subtitled). Good use of directional effects in the sound design, and the big action scenes are appropriately noisy without being an unfocused din. Dialogue is clear, music is effectively layered in. Sounds great.

(HD, 1:27:57) - A feature-length behind-the-scenes piece that takes a character-by-character approach to the production process. Not as in-depth one might hope with this sort of length, but consistently entertaining.

Final Thoughts:
Wild and wacky, Terra Formars is exactly the kind of sci-fi/action whatzit one would expect from off-kilter auteur Takashi Miike. It's a lotta fun. Recommended.