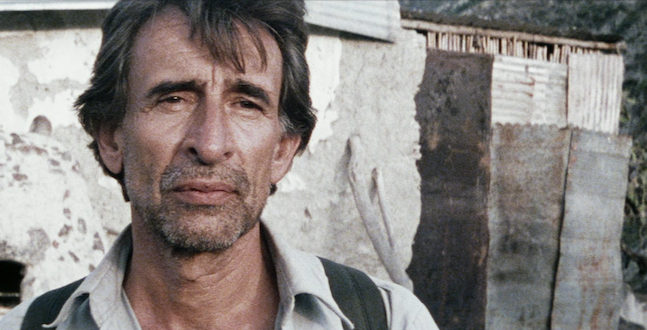 The narrative of Japón is simple. Alejandro Ferretis is an artist who feels he has lost his way in the city. He travels to a secluded village for the purpose of finding peace and committing suicide. The locals can be as alternately welcoming or inhospitable as the surrounding rocky terrain, but the artist finds comfort in the home of an old woman, Ascen (Magdalena Flores). Ascen is in danger of losing her barn to a greedy nephew who just wants the stones it's made from. During his time with Ascen, the artist starts to warm up -- one might even say he becomes hot-blooded -- and reconsiders his plan.

Shot in super-wide anamorphic 16mm, Japón benefits from being seen on the biggest screen available. It is a film where aesthetics take precedence over story and even character. The cast entirely consists of non-actors, because Reygadas prefers the naturalism of real people. However, those real people, by their lack of polish, sometimes end up rupturing the reality of the onscreen world. They break the fourth wall, by looking off-camera for the reactions of the crew -- at one point, a drunk actor flat-out says that the filmmakers cannot have any of the alcohol he is enjoying. Of course, cinema can withstand such formal disruptions at this late date -- one can look to Close-up by another Reygadas hero, Abbas Kiarostami, for a superior example of this kind of filmmaking -- but, for this viewer, these touches don't better serve the film that Reygadas is making.

Here is where subjectivity comes heavily into play. As a movie fan, I think there is much to admire in Japón; it's consistently ambitious and thoughtfully crafted. I just don't like it very much. It only sporadically connects with me as a viewer beyond a superficial intellectual level, despite the efforts of the often charming lead actors and the daring of the film crew. The film famously ends with a tracking shot that relays its final information in an almost drunken 360-degree whirl, scored to Arvo Pärt's "Cantus in Memoriam Benjamin Britten." It's a delirious bit of filmmaking, the kind of big swing that normally knocks my socks off. Here, I patiently waited for Reygadas to wrap it up.

The Blu-ray
Japón comes with a more sizable booklet than many recent Criterion discs. It includes an essay by Valeria Luiselli, color photographs, and storyboards.

The Video:
No, this isn't a typo. Japón features an AVC-encoded 1080p 2.88:1 image (with rounded edges), making it the widest widescreen I've seen. Shot in anamorphic 16mm, with a bleach bypass process, the cinematography features an undeniably unique look that this transfer does an excellent job of reproducing. It's grainy, it looks faded, but considering the filmmakers' intention, it looks great here. Strong detail and no noticeable digital interference.

The Audio:
Reygadas is meticulous in designing his soundtracks, and this Spanish DTS-HD MA 2.0 stereo mix (with optional English subtitles) is alternately layered and spare, depending on the stylistic intention. No distortion or damage to detract.

(HD, 42:41) - Amat Escalante, director of the freaky horror melodrama The Untamed, interviews Reygadas about making the film. Reygadas is articulate and forthright in describing his sensibilities and his process.


Final Thoughts:
Scoring this film is quite difficult for me. There's a lot to admire here, but not much to love. I think many viewers of arthouse flicks will be quite pleased with Japón, but it didn't satisfy me. Viewers who already know and love this movie will be well-served by Criterion's excellent treatment. Skeptical newcomers should feel free to sample the film (and its extras) on Criterion's streaming service before committing to a purchase. In other words: Rent It.