Cinedigm // Unrated // July 23, 2019
List Price: $69.97 [Buy now and save at Amazon]
Review by Stuart Galbraith IV | posted August 5, 2019 | E-mail the Author
Shout! Factory's Universal Horror Collection: Volume 2 is a four-feature boxed Blu-ray set certain to test the patience and wallet of even the most ardent fans of ‘30s-‘40s horror movies. Universal, the label from which Shout! licensed these titles, already repeatedly gouged fans with mix-and-match collections that had them essentially buying the same movies over-and-over again.

If, say, you like Wolf Man movies for this reason bought their Blu-ray of Abbott and Costello meet Frankenstein in 2012, and then The Wolf Man, and then Frankenstein: Complete Legacy Collection in 2016, you'd be repurchasing those two earlier titles in order to see Frankenstein meets the Wolf Man, House of Frankenstein, and House of Dracula, all featuring hapless Lawrence Talbot (Lon Chaney, Jr.). But then let's say you also wanted a copy of She-Wolf of London and WereWolf of London, two lycanthropic knockoffs. In order to obtain those two movies, you'd now have to rebuy three movies for the second time and two more for a third time. Horror fans were quite annoyed by this, and justly so.

Shout!'s release of Universal Horror Collection: Volume 1 offered The Black Cat (1934), The Raven (1935), The Invisible Ray (1936), and Black Friday (1940), all featuring both Boris Karloff and Bela Lugosi, the era's top genre stars. Three of the four films are genuine classics of the genre, though the RSP, $69.97, or $17.49 per movie, is a bit steep, even for Shout! Factory, though perhaps that high cost is partly to offset their licensing costs.

Now comes Volume 2, with the decidedly lesser foursome of Murders in the Zoo (1933), The Strange Case of Dr. Rx (1942), The Mad Doctor of Market Street (1942), and The Mad Ghoul (1943). The first three titles are only marginally horror; two are primarily mysteries with as more comedy relief than horror, and the other is basically a jungle adventure with even more lame comedy than horror. None feature Karloff, Lugosi, or even ‘40s genre star Lon Chaney Jr. And all run 61-66 minutes, barely more than an hour apiece. Yet, again, Shout!'s SRP is nearly $70 for these less-than-stellar titles. Only The Mad Ghoul comes close to being any good, an above-average B-horror picture. The Blu-rays certainly look nice, yet I wouldn't argue with fans over on the Classic Horror Film Board and elsewhere who've decided to stick with their perfectly fine DVDs. 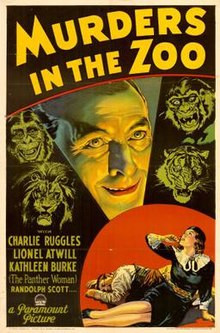 Murders in the Zoo's pre-Code reputation precedes it. It's not nearly as salacious or violent as its champions suggest, and a little of top-billed comic character actor Charlie Ruggles goes a long way, his character's struggles with alcoholism the root of the picture's reputed laughs.

Gorman has returned with a cargo-hold full of exotic animals. The zoo's new press agent, Peter Yates (Ruggles), decides to host a fundraiser dinner amidst all the cages, during which the animals escape and Roger is apparently bitten and poisoned to death by a black mamba, one of researcher Jack Woodford's (Randolph Scott) specimens.

A Paramount, rather than Universal production, Murders in the Zoo was quite the shocker in 1933, but today, even with all the renewed interest in pre-Code salaciousness and violence, doesn't deliver as much as that opening scene promises. What it does offer is a gloriously sleazy performance by Atwill, his pre-Code horror films and quasi-horror films permitting a sexual-psychological unsavoriness that his 1939-46 films would not have allowed. 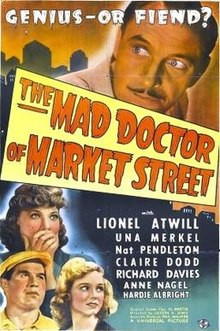 The Mad Doctor of Market Street finds the mad doctor, Dr. Ralph Benson (Lionel Atwill again) on Market Street only for the first few minutes, then it's all aboard the doomed S.S. Paradise, bound for New Zealand, with Benson, now called Graham, shedding his beard and eluding authorities after murdering a man in a botched suspended animation experiment.

After a spectacular if stock footage-driven onboard fire and sinking, Graham and fellow passengers - Margaret Wentworth (Una Merkel), her niece Patricia (Claire Dodd), punch-drunk fighter Red Hogan (Nat Pendleton), steward Jim (Richard Davies), and cowardly ship's officer Dwight (John Eldredge) - find their lifeboat has drifted to a South Seas island occupied by hostile natives, who threaten to burn them all at the stake. Tut-tut, the extravagantly confident chemist boasts, as he's able to revive Tanao (Rosina Galli), wife of island chief Elan (Noble Johnson, essaying his role with élan), seemingly dead but apparently just in a coma, or something. The naïve natives declare Graham the "God of Life," giving him free reign over the island, including the marooned white folk, who want no part of the Mad Doctor's experiments.

Curiously parallel to the concurrent Abbott & Costello comedy Pardon My Sarong, which featured Atwill as a similarly stranded mad scientist, The Mad Doctor of Market Street is annoyingly inconsistent about Atwill's character, who at various times seems interested in a) putting the living into suspended animation then reviving them; b) reviving people on the brink of death; and, c) reviving the long-dead. Atwill's over-the-top thesping is somehow admirable, making the ludicrous at least entertaining to watch. It's as if we're witnessing not Atwill but rather a performance by the hammy actor Atwill portrayed in Lubitsch's To Be or Not to Be, made that same year.

Unfortunately, as with Murders in the Zoo, a comic actor, Una Merkel is top-billed, her flighty, if not dim-witted screen persona even more dense and clueless than usual. Claire Dodd is quite appealing as her niece, but she and the rest of the cast are further weighed down with secondary comic relief from Nat Pendleton, who by comparison makes Merkel look like a genius. 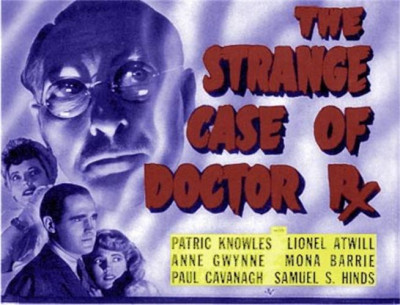 The Strange Case of Doctor. Rx is really a B-mystery, outrageously illogical and implausible on myriad levels. The film plays as if it were originally written as a Monogram-era Charlie Chan film, and even includes that series' comedy relief, African-American comedian Mantan Moreland. In place of Charlie Universal offers up private eye Jerry Church (Patric Knowles) who, at the urging of criminal defense attorney Dudley Crispin (Samuel S. Hinds) and former police partner Capt. Hurd (Edmund McDonald), looks into a series of murders of acquitted gangsters, all of whom met with foul ends by a killer who leaves "Dr. Rx" as his calling card.

Horror plays almost no part in the plot, and when it does, boy howdy, it comes out of nowhere. Rather, the movie pits Church against his scheming girlfriend, Kit (Anne Gwynne) who, for Production Code reasons, becomes his wife in the middle of the story, with Moreland, as Church's valet, Horatio B. Fitz Washington, sharing comedy relief screentime with former and future Third Stooge Shemp Howard. Both comics rise above the badly-written material, some of which was ad-libbed by the actors, working from an incomplete (and incoherent) screenplay. An intriguing bit of trivia. After Shemp's death in 1955, Three Stooges front-man Moe Howard reportedly suggested Moreland replace Shemp in the Third Stooge slot, but studio heads nixed the racially-mixed-nuts proposal.

After much boring and/or routine mystery plotting, Church and Horatio find themselves held captive by a cowled Dr. Rx, in a Kenneth Strickfaden-decked out laboratory complete with caged gorilla (Ray "Crash" Corrigan). With Horatio tied to a chair and Church strapped to a slab, the medico gleefully promises Church a brain-swap with "Nbongo," who draws the helpless Church ever closer to his cage while Rx holds Horatio's head so that he's forced to watch the imminent mauling.

In light of what follows, none of this makes the remotest bit of sense, seemingly tacked onto the picture only so that it could be advertised as a typical Universal Horror. Yet, brief as it is, this surprisingly sadistic flash of audaciousness is actually pretty unsettling, especially when breezy, carefree Horatio all but tearfully begs for his boss's life, or at least not forced to watch the grisly murder.

The dénouement, however, is painfully implausible, while Lionel Atwill, billed second in the credits and most prominent in the advertising, is probably onscreen less than three minutes. 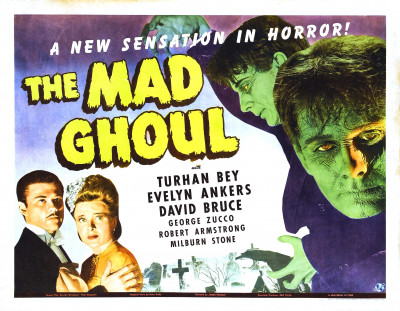 Finally, The Mad Ghoul, featuring George Zucco this time rather than Atwill. And while it's another dip into the same revive-the-dead well, this time it works. Zucco is Dr. Alfred Morris, college professor, who, after resurrecting a dead monkey, coaxes medical student Ted Allison (David Bruce) into acting as his first human Guinea pig in a treatment involving odorless gas and extracted heart fluid.

Further complicating matters, 60-something Morris also pines away for Isabel, using his mindless if unpredictable ghoul to do all the dirty work, including obtaining "fresh" hearts surgically removed by Ted in his zombie-state.

Far better than Universal's mid-‘40s batting average, The Mad Ghoul benefits from a good cast, which includes King Kong's Robert Armstrong as a determined reporter, and Milburn Stone and Charles McGraw and detectives. Zucco wisely underplays his part, as if he recognized how superior it was compared to the Poverty Row dreck he was by this point being offered, but it's David Bruce, increasingly desperate and disoriented flip-flopping between normalcy and zombiedom, that really sells the story.

All the romance stuff, a quadrangle instead of the usual love triangle, is trite, but in this case, it serves to drive both madman Morris and helpless Ted. Isabel's been wanting to break her engagement with Ted for some time, but he's not ready to face the heartache. Under Morris's spell, Ted's conflicted emotions about his relationship with Isabel become even more confused, she wanting to help her obviously ill ex, while he can't fathom what's happening to him, or why everyone around him is acting so strangely.

Jack Pierce's modest makeup effects are slight but effective. Though the picture was quickly and cheaply-made, there's obvious effort to show Ted at various stages of, one supposes, bodily decay, at his worst Ted all ashen and shriveled like an uncased mummy.

Each film in Shout!'s Universal Horror Collection gets its own disc, maximizing the bit rate, but otherwise fairly wasteful. All in black-and-white and in their original 1.37:1 aspect ratios, the transfers all look very good, the much older Murders in the Zoo a bit softer and grainer at once, but still impressive. The DTS-HD Master Audio 2.0 mono is fine and optional English subtitles are included. Region "A" encoded.

Supplements include image galleries on all four films, and a trailer for The Mad Doctor of Market Street but not the others. Gregory William Mank provides an audio commentary track for Murders in the Zoo, and is the talking head for the 20-minute featurette "Gloriously Wicked: The Life and Legacy of Lionel Atwill." It's a very good piece, Mank making frank and interesting observations about the notorious actor, whose real-life sexcapades nearly train-wrecked an otherwise productive career. Thomas Reeder provides a second commentary track, this one for The Mad Ghoul, which also includes a press kit. A modest booklet dominated by black-and-white stills, rounds out the package.

Only die-hard classic horror fans will want to sit through these pictures, and many of these fans will be dissuaded by the price of this set, and the fact that, taken as a whole, these are mostly minor horror films, and several barely that. The transfers and extras are excellent, but I found it more than a bit disappointing. Recommended.