Lost City Of The Jungle

VCI // Unrated // October 1, 2019 // Region 0
List Price: $19.99 [Buy now and save at Amazon]
Review by Stuart Galbraith IV | posted October 21, 2019 | E-mail the Author
Part of label VCI's ambitious plan to release newly-remastered Blu-ray editions of classic Universal serials, Lost City of the Jungle (1946) is an entertaining and unusual chapter play for reasons described below. Remastered in 2K from the original 35mm fine grain, the transfer exhibits a lot of wonderful detail much of the time - but, almost perversely, VCI's access to good film elements is profoundly subverted by remastering seemingly designed to make the image resemble smeary VHS. True blacks are non-existent. Everything is a gray, washed-out mess with no contrast. Flashes of fine detail can't compensate for the utter madness of the senseless, washed-out look the project supervisor settled (strived?) for.

VCI has a reputation for gumming up their Blu-ray releases and, to a point, I've been more forgiving than others. But, in this case, it's mindbogglingly counterproductive to have the raw elements capable of producing a definitive high-def release, yet to go to some considerable lengths to give it the look of half-inch analog videotape. 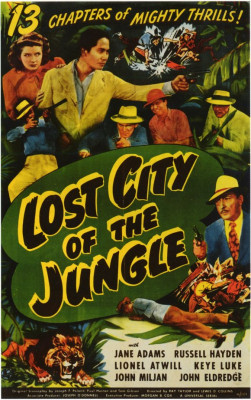 The thirteen-chapter serial is historically significant for several reasons. For one, it was Universal's penultimate chapter play, the studio reorganized as Universal-International several months after Lost City's release. Briefly, the company decided to aim for classier product, and lowly serials were dropped from their program.

More significant to genre fans, Lost City of the Jungle marks the final screen appearance of cult actor Lionel Atwill. The once prominent Broadway and film star had eased into character parts in both A- and B-pictures by the early 1940s, but a 1941-42 legal scandal involving Atwill's participation hosting a sex orgy damaged his career. The biggest studios stopped hiring him, though Atwill still enjoyed steady employment at lesser companies like Columbia and Poverty Row's PRC. He continued working steadily at Universal particularly, where he had become a kind of stock company name in their horror films, as well as their Sherlock Holmes series with Basil Rathbone. Around this time Atwill also began appearing in serials, including Republic's Captain America and Universal's Raiders of Ghost City (both 1944).

Atwill began shooting Lost City of the Jungle around January 1946, but by this time he was dying of lung cancer. At some point he realized he wouldn't be able to complete the film, and died on April 22, 1946, one day before the serial's first confirmed release date. Rather than junk Atwill's precious footage, the producers decided to write around it. As originally conceived, his character was to be the story's villain, but in the reworked film, his faithful secretary, Malborn (John Mylong, of Robot Monster infamy) from the start identifies himself as the real puppet master.

The character-crammed story concerns the race to find Meteorium 245, a defense against the (newly-developed) atomic bomb, found only in the Himalayan province of Pendrang. Eric Hazarias (Atwill), eager to sell the mineral to the highest bidding nation, fakes his own death and assumes the identity of Geoffrey London, esq., to move about freely. Henchmen Johnson (Dick Curtis) and Marlow (George Lynn) are understandably surprised to learn that Hazarias's secretary (Mylong) is the real brains behind the outfit.

Meanwhile, the United Peace Foundation, obviously based on the emerging United Nations, dispatches UPF operative Rod Stanton (Russell Hayden) to investigate. Stowing aboard his doomed plane (stock footage from Lost Horizon's airplane crash) is Marjorie Elmore (Jane Adams), daughter of Dr. Elmore (John Eldredge), an archeologist stationed there. They're joined by Stanton's trusted lieutenant, athletic and incongruously Polynesian Tal Shan (Keye Luke), who more than once gets his boss out of a jam. (This was, apparently, to match stock footage of Sabu and his stunt double.)

The video transfer notwithstanding, Lost City of the Jungle is enormous, if highly confusing fun. For years Republic's serials were considered far superior than those made by rivals Columbia and Universal, though Republic's were also far more readily available for years, which may explain why. That studio had superior stunt work and fine miniature effects by the legendary Howard and Theodore Lydecker, but the miniature effects in Lost City compare favorably, while Lost City has a decided edge in terms of its cast and production values. The sets make be redressed leftovers from other, bigger productions, but their scale has Republic beat by a mile. Appearance-wise, it looks no different than one of Universal's feature films, rather than most cheap serials.

The cast helps, too. Star Russell Hayden started out in the production end of the business, but his boyish sincerity won him the role of Lucky Jenkins in the Hopalong Cassidy film series after the first juvenile lead, James Ellison, departed. He was terrific in those movies, and after 27 of those set off on a starring career of his own, often in B-Westerns himself.

Jane Adams was another appealing talent, best remembered to today as the sympathetic hunchbacked nurse in House of Dracula (1945), and as Vicki Vale in the second Batman serial. Keye Luke is another great addition, the Chinese-born American actor remaining busy after first gaining fame as Charlie Chan's "Number One Son" in Fox's film series. Luke admirably avoided playing stereotypical Asian types; in this, he's anything but a sidekick, but a trusted equal of Hayden's character.

In supporting parts, Dick Curtis and Gene Roth will be familiar to fans of the Three Stooges, they frequently playing heavies in those shorts. One imagines that it was during the production of Lost City that Curtis and Hayden teamed up to create Pioneertown, a Western backlot in San Bernardino's high desert.

The serial's attempt to integrate Mylong (who, like director Billy Wilder, has a thick Viennese accent) into Atwill's function in the plot is confusing and often ineffective, sometimes incorporating the use of "Fake Shemp"-like doubles, but fascinating for those aware of the circumstances under which this was mandated. Happily, at least, Atwill himself does not appear ill at all in his final film role. Adding to the confusion, the serial does not have the usual recap at the beginning of each chapter, usually text of some kind providing viewers with story information before resolving the previous chapter's cliffhanger. Here, each chapter opens in a conference room at the United Peace Foundation, where characters vaguely discuss the events up to that point in the story.

In its original 1.37:1 black-and-white form, Lost City of the Jungle looks sharp but otherwise is a mess described in more detail above. The PCM mono is acceptable. Optional English subtitles are provided on this region-free disc.

Supplements include liner notes by columnist Patrick McCabe, an original trailer, and a photo gallery.

An enjoyable nearly-lost sci-fi serial, for fans of this type of short it comes Highly Recommended.