Major and the Minor, The

Arrow Video // Unrated // September 24, 2019
List Price: $27.99 [Buy now and save at Amazon]
Review by Stuart Galbraith IV | posted October 21, 2019 | E-mail the Author
The Major and the Minor (1942) marked screenwriter Billy Wilder's directorial debut in Hollywood. He'd directed one film before this, 1934's Mauvaise Graine ("The Bad Seed"), made in France after Wilder had fled to Paris as Hitler's power solidified. In Hollywood from 1933, Wilder established himself as a major screenwriting talent, especially following the acclaimed that greeted Ninotchka (1939), and often in partnership with writer Charles Brackett. Wilder cajoled producer Arthur Hornblow, Jr. that he was ready to take another crack at directing, an aspiration motivated initially to help ensure faithful adaptations of his screenplays. One theory is that the front office so tired of Wilder's complaints about what other directors had done with his scripts that they simply gave in, to be rid of him.

This debut is both impressive and mildly disappointing, given the heights Wilder (and Brackett, and later in Wilder's partnership with I.A.L. Diamond) would reach within just a few years. Hedging his bets, Wilder decided that for this debut he would film a sure-fire, highly commercial script. The Major and the Minor overall is very good, but it feels more like a typical, slickly-made ‘40s screwball comedy/star vehicle than Wilder's later films. 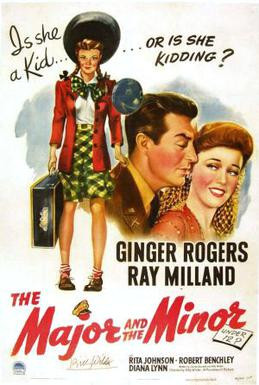 Dispirited Iowan Susan Applegate (Ginger Rogers) is ready to quit New York after a series of miserable jobs, the final straw being an encounter with amorous married man Albert Osborne (Robert Benchley), who hires Susan for a scalp massage but clearly envisions other services she adamantly refuses to provide.

She's saved just enough money for a train ride back to Iowa, but discovers that the price of her fare back home has been raised since her arrival. Desperate, she disguises herself as a twelve-year-old girl, "Su-Su," and, aided by a con man (Tom Dugan, the Hitler impersonator in To Be or Not to Be), buys a half-price children's ticket. The train conductor is suspicious, so she hides in the private compartment of Maj. Philip Kirby (Ray Milland), an instructor at a military academy. He falls for her ruse and becomes protective of the frightened "girl," later insisting that, until her parents can retrieve her, she stay at the home of his fiancée, Pamela (Rita Johnson), whose grouchy father, Col. Oliver Slater Hill (Edward Fielding), runs the academy.

At the military academy, Susan rooms with Pamela's teenage sister, Lucy (Diana Lynn), who immediately recognizes Susan as an adult. Sympathetic, Lucy enlists Susan's help to sabotage Pamela's selfish efforts to keep Philip at the Academy, despite his longing to be reassigned to active duty. In the meantime, Susan finds herself in the center of attention among the hot-blooded if underdeveloped cadets, while falling for Philip herself.

The film was made quickly and efficiently, Wilder crediting editor Doane Harrison for guiding him through the process, the editing remaining on-set during production. This resulted in much cutting-in-camera, with minimal wasted coverage. Wilder valued Harrison's contributions to the point that he hired Harrison for all his subsequent films, until the cutter's death in 1968.

The picture has Wilder's (and Brackett's) signature wit dialogue-wise, and there's one hilarious visual gag at the expense of Paramount star Veronica Lake, but the movie itself if pretty ordinary, if amusing.

One can't help but think about Wilder's later Some Like It Hot and other films, especially Sidney Pollack's Tootsie (1982), with The Major and the Minor's premise of an adult man attracted to a pre-teenager who's really an adult woman. In 1942, such racy suggestions of pedophilia were simply out of the question, so the romantic tension between Philip and Susan is only hinted at. He really seems to believe that she's a child, rather than going along with her masquerade, and that stifles many comic possibilities. Rogers herself was about 30 years old at the time, and is never really convincing as a 12-year-old, though this seems to have been unimportant to Wilder and Brackett, who deliberately give her dialogue and behavior that suggests a child even younger and more naïve than would be believable. Indeed Diana Lynn's appearance as a "normal" teenager arrives just as "Su-Su" infantilism borders on annoying. Her work in this seems to have inspired writer-director Preston Sturges to expand upon that basic character for his The Miracle of Morgan's Creek (1944), shot soon after.

In sharp contrast to mentor Ernst Lubitsch's near-concurrent To Be or Not to Be, regarded as a great, classic comedy today but then seen as distasteful in light of the war, Wilder's film is pro-war effort all the way, with Philip just aching to serve his country at the front lines rather than fritter away his skills at a boys' academy. Hardly unusual for a Hollywood film of the time, but uncommonly patriotic and uncynical for Wilder.

Regardless, the picture was a big critical and commercial success, with a very healthy $2.5 million in rentals. Wilder was on his way.

An Arrow Academy release licensed from Universal (owners of the pre-1948 Paramount library), The Major and the Minor looks great in its original 1.37:1 black-and-white form, the transfer drawn from a 2K scan of the original 35mm nitrate camera negative. The mono DTS-HD Master Audio is also above average. Optional English subtitles are provided on this region-free disc.

Supplements include an audio commentary by Adrian Martin; a video appreciation of the film by Neil Sinyard; an excellent, half-hour audio-only interview with Ray Milland from 1975, with the actor providing insightful, detailed answers to the good interviewing team's questions; a one-hour radio adaptation featuring the two stars; an image gallery and original trailer.

Not part of the top-tier of great Billy Wilder movies, The Major and the Minor nevertheless is a lot of fun, and Arrow's transfer and supplements fill out the package nicely. Highly Recommended.