Man of a Thousand Faces

Arrow Video // Unrated // October 29, 2019
List Price: $22.99 [Buy now and save at Amazon]
Review by Stuart Galbraith IV | posted November 4, 2019 | E-mail the Author
Not often mentioned in film histories is the profound influence of The Jolson Story (1946), an absurdly fictionalized biopic of entertainer Al Jolson. Made by lowly Columbia Pictures, then primarily a B-studio, the $2 million production with no major stars earned domestic rentals of four times its production costs, making it one of the top-grossing movies of the entire 1940s. The 1949 sequel, Jolson Sings Again was also a huge hit, with $5 million in U.S. and Canadian rentals.

These films prompted a dozen-year vogue for other biopics of entertainers, usually singers, musicians (often band leaders), and songwriters, but also actors and others in the field of entertainment. Universal-International enjoyed one of its biggest successes of the 1950s with The Glenn Miller Story (1954), while MGM's Love Me or Leave Me (1955), the Doris Day-James Cagney biopic of singer Ruth Etting, was similarly successful.

It was therefore unsurprising that Universal, as their "special release for Hollywood's Golden Jubilee" would fuse the biopic genre and star James Cagney with exploitable, famous movie monsters for Man of a Thousand Faces (1957), a dramatization of the life of Lon Chaney (1883-1930).

The movie is no more historically accurate than nearly all the other biopics of the 1946-1960 era, and its recreations of Chaney's famous silent screen characters is especially disappointing. But none of that mattered much to 1957 moviegoers, who ate it up, though the film was less successful at the box-office than U-I might have hoped.

Cagney, rather than Chaney, is the whole show. Unlike other biopic topics, Lon Chaney was a tricky sell. His movies were only 30 years old at the time, so older 1957 moviegoers would have remembered seeing them, but the movies themselves were regarded as ancient antiques even then, and rarely shown on television or anywhere else.

Today Cagney is remembered more as a great star of Warner Bros. gangster movies and backstage musicals, but back then he was regarded as an actor of the highest caliber, in line with Spencer Tracy or even Olivier. No less an authority than Orson Welles regarded Cagney the greatest screen actor of all-time. (Indeed, watching Man of a Thousand Faces, I was struck by how many of Cagney's little facial tics and reactions Welles would emulate in his own later performances.) 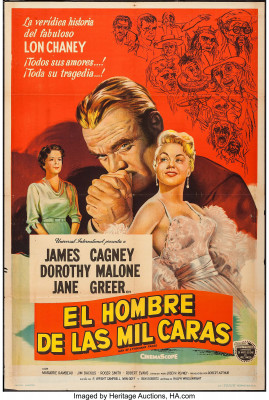 At the turn-of-the-century, Lon Chaney (Cagney) is in Vaudeville with his wife, Cleva (Dorothy Malone), an emotionally fragile singing star. When she misses her cue and refuses to go on, Chaney, in Emmett Kelly-like clown makeup, improvises an act the audience embraces, and soon he's as big a star as she is. (One of the few inspired visual touches of the picture has Cleva's dressing room located in the theater's flooded basement.)

En route to the west coast, the Chaneys stop in Colorado Springs so that Lon can introduce Cleva to his large family. What he doesn't tell the now-pregnant Cleva is that his parents (Celia Lovsky and Nolan Leary) are both deaf-mutes. This positively horrifies Cleva, who becomes obsessed that her own child will be born deaf. She wants to abort the pregnancy (without ever using that term) but he insists the baby will be "normal."

And so he is. Creighton (later Lon, Jr.) is perfectly fine, but now Cleva is unhappy that Lon expects her to devote her time caring for Creighton, while she, increasingly unhappy, embarks on a series of marital affairs. Later, Lon is in the middle of a live performance when Cleva walks onstage and swallows a bottle of acid in a suicide attempt.

She recovers, but the scandal forces Lon to leave the theater and seek employment in the lowly art of motion pictures. He divorces Cleva, but family court sends Creighton to foster care until Lon can establish a stable income and family environment. At Universal Studios, Lon's diverse makeup skills quickly elevate his status from day-player to major star.

Man of a Thousand Faces neatly divides its two-hour running time into equal halves. The first-half is a vaguely Sirkian melodrama built around Sirk regular Malone's bizarre, hysterical fear of deaf-mutes. Were turn-of-the-century folk really that repulsed by people using sign language? I doubt such extreme reactions were typical, yet she looks at Chaney's parents if they had three eyes. Lovsky, however, is very good in her wordless performance, as is Cagney.

The second-half chronicles Chaney's rise as a film star, aided by absurdly young genius producer Irving Thalberg (the late Robert Evans, well-cast, considering) and press agent Clarence (Jim Backus). This part of the film captures the atmosphere of silent filmmaking reasonably well, with an interesting characterization by stage actress Marjorie Rambeau as a working-class bit player making a living playing wealthy dowagers. There's some good if brief footage of the Universal backlot, one scene playing out on the same set featured throughout the recently-released-to-Blu-ray serial Lost City of the Jungle (1945).

The movie veers further and further from the truth as it moves along. While Chaney did make The Hunchback of Notre Dame (1923) and The Phantom of the Opera (1925) at Universal, his most productive years were at MGM immediately after and until his untimely death in 1930, though the movie hints that Chaney stays at Universal throughout. Further, the screenplay revolves around doting father Lon constantly worried about his son's welfare and their close relationship, despite Lon's controlling nature. In truth Lon Chaney Jr. had nearly the opposite relationship with his famous father.

Another problem is Cagney himself. Lon Chaney was lean and craggy-faced, more like Richard Boone than Cagney, who was a short (and, by this time, rather fat) Irish-American with round, compact and severe facial features that match Chaney's not at all. It's like casting Michael J. Fox in a biopic of John Wayne. Further, Cagney was at 57 already 10 years older than Chaney was when he died in 1930, and not convincing as a man in late 20s at the beginning of the story. As the young adult Lon Chaney Jr., 77 Sunset Strip's Roger Smith looks nothing like the hulking, fleshy young Lon Jr. of reality, even though that actor was certainly familiar to 1950s audiences through his film and TV appearances of the period.

Arrow's excellent Blu-ray helps in our understanding of the film, mainly how its higher resolution allows viewers to better appreciate the delicate acting of Cagney, Lovsky, and Jane Greer especially, the latter as Chaney's second wife. It also, very slightly, allows Dorothy Malone's character play a bit more sympathetically and Cagney's more obsessively controlling one, again through the subtleties of their performances. Conversely, it also makes actor-turned-director Joseph Pevney's leaden direction appear even more conventional and uninspired, along with the mostly uninteresting art direction and overemphatic Frank Skinner score.

Filmed in black-and-white CinemaScope, Arrow's new Blu-ray sources a 2K master from the original camera negative. It basically looks flawless. The DTS-HD Master Audio track is mono; the film may have originally been released that way, or perhaps offered with Perspecta Stereophonic sound encoding, but regardless, for it is the track is reasonably strong. Optional English subtitles are provided on this region "A" disc.

Supplements include another terrific audio commentary by Tim Lucas, and a 20-minute on-camera appearance by genre historian Kim Newman, who helps put Chaney's career and the production of the film into perspective. A booklet, trailer and an image gallery round out the extras.

A mixed bag of a movie featuring Cagney and several other fine performances on the plus side, unimaginative direction and screenwriting on the other, Man of a Thousand Faces is still pretty good overall, definitely worth seeing if far from great. Recommended.