Arrow Video // Unrated // November 12, 2019
List Price: $39.95 [Buy now and save at Amazon]
Review by Stuart Galbraith IV | posted November 25, 2019 | E-mail the Author
The Far Country (1954) was the sixth collaboration (and fourth Western) of director Anthony Mann and actor James Stewart, following Winchester ‘73 (1950), Bend of the River (1952), Thunder Bay, The Naked Spur (both 1953), and The Glenn Miller Story (1954). Except for Winchester ‘73, because of its unusual plot and the fact that it's the only one in black-and-white, the Mann-Stewart Westerns tend to run together, at least in this reviewer's mind. In all of them Stewart plays a loner, even when partnered with a sidekick, as here, and psychologically troubled, often obsessive and vengeful, in movies than paralleled his dark characters for Alfred Hitchcock in the late-‘40s through ‘50s.

In The Far Country, Stewart plays another hard man, this time in the pitiless Yukon, where decent people have no place and "frontier justice" shows no mercy. So hardened and so self-involved, his is a character only an actor the likes of Jimmy Stewart could've pulled off. 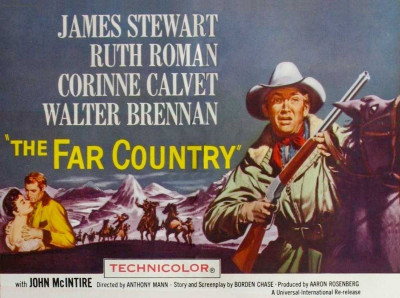 In 1896 Seattle, Jeff Webster (Stewart) arrives with a herd of cattle he's driven across the country, minutes before his paddleboat is due to leave port, bound for Skagway, Alaska. However, just as the ship is about to depart, authorities board to arrest Jeff, charging him with the murder of two trail hands. Glamorous stranger Ronda Castle (Ruth Roman) hides Jeff in her stateroom for no clear reason, and upon arriving in Skagway Jeff alludes ship's Capt. Benson (Stuart Randall) and his corrupt crew, brazenly driving the cattle into town.

But Jeff's actions disrupt a hanging, where the Judge Roy Bean-like Gannon (John McIntire) instructs his deputies-henchmen (Jack Elam and Robert J. Wilke) to arrest Jeff. Calling an impromptu trial to order in Ronda's cash-only saloon, Gannon genially clears Jeff of the two killings (the cowboys had tried to steal herd, Jeff claims) but seizes the valuable beef for "disturbing the peace."

This leaves Jeff and his partner, Ben Tatem (Walter Brennan), little choice but to accept Ronda's offer to Jeff to have him ride point shipping supplies to her new saloon, over the glacier to the gold rush settlement of Dawson, across the border into Canada. Without telling his new boss, however, during the first night they make camp Jeff sneaks back to Skagway and steals his cattle back from Gannon. Once over the border the crooked judge will have no legal authority to stop him.

In Dawson, Jeff sells his cattle to opportunist Ronda, she outbidding long-established hash house owner Hominy (Connie Gilcrest), and disappoints Ben by pouring their newfound wealth into a gold claim, despite their earlier decision to settle down in Utah. While many of the settlers decide to stick out the harsh winter and start a "real" community, Gannon plots to steal away everyone's claims while Jeff schemes to beat a hasty retreat.

Most of the Mann-Stewart Westerns utilize a "binary" counterpoint to Stewart's character, a villain barely distinguishable from the hero, like Bend of the River's Arthur Kennedy, who shares more in common with Stewart's character than Stewart's does with the wagon train settlers he leads. In The Far Country there are, effectively, two such characters. Jeff, Ronda, and Gannon are concerned only with their own welfare - the hell with everyone else. Though paired with Ben, one gets the sense that Jeff merely humors old-timer Ben's starry-eyed dreams of the two of them settling down in Utah, Jeff looking after Ben in his old age. Jeff's habit of pulling out Ben's pipe and sticking it in his mouth is supposed to be a sign of affection, but even that gesture comes off as condescending and maybe even passive aggressive. Ben is Jeff's conscious, but rarely does he really listen to him.

In the film's best scene, an avalanche has buried Ronda and others bound for Dawson, but Jeff, defiantly leading his cattle down a different trail, refuses Ben's pleas that they go and help the survivors. "Why?" is Jeff's standard response. Aghast at his friend's callousness, Ben can only respond, "You're wrong, Jeff. You're wrong."

Ronda and Gannon are similarly selfish and cold-blooded, though their methodology is entirely different. Ronda's cutthroat business sense hides behind a frozen smile and sex appeal, while Gannon is witty and sociable, if ready to steal you blind the moment you're vulnerable. They're both more appealing and more ruthless than Jeff.

Probably without intending to do so, in The Far Country damns unfettered capitalism from two fronts: Ronda seizing upon the newly-arrived cattle to launch a mini Walmart-like cornering of the market in Dawson, Hominy's sincere pioneering efforts be damned. Gannon, meanwhile, twists the law to further his personal financial interests and to consolidate his hold over the community. In another interesting sequence, prospectors are legally bound to pack 100 lbs. worth of food before they're allowed to cross the border into Canada - food they can only purchase from Gannon's overpriced supply store.

Jeff, with his prized beef, stands to get rich himself, but only if he'll play along with the corruption. And only because he's such a misanthropic loner perennially ramblin' that he does not.

What separates The Far Country from the other Mann-Stewart Westerns is its spectacular location scenes, filmed in Alberta, Canada, substituting for Alaska and the Yukon. While much of the film was clearly made on the Universal lot, close to half of it was shot with gorgeously photogenic glaciers and snow-capped mountains serving as backdrops, and the location sets there are grittily realistic.

The cast, some of them regulars in these Mann-Stewart collaborations, is excellent. Brennan is less the comical sidekick than usual, a nice change of pace, and John McIntire especially makes a memorable villain. Robert J. Wilke likewise is a formidable henchman, in one scene cruelly menacing well-meaning drunk Jay C. Flippen. Royal Dano, Jack Elam, Kathleen Freeman, and particularly Brooklyn-accented Connie Gilchrist come off well, with only Henry (Harry) Morgan billed seventh but curious wasted in a trivial role.

Arrow's two-disc Blu-ray set tries hard but is problematic. Two aspect ratios are offered, on separate discs: 1.85:1 and 2.00:1 widescreen. The former is a bit more pleasing to the eyes of this reviewer, but both utilize the same soft and grainy elements. Apparently shot on Eastman Color stock and printed by Technicolor for its original theatrical run, the new 4K restoration falls short for reasons not entirely clear. Documents claim the "original 35mm camera negative" was used but the presentation is only intermittently sharp and just barely okay the rest of the time. Any kind of dissolve or process shot looks awful, like Super-8 blown up to 70mm. Either that claim is inaccurate or the original negative was in terrible shape. But the Blu-ray is just good enough most of the time to at least suggest what 1954 moviegoers experienced, and the color is stronger than one might have expected. The LPCM mono audio is supported by optional English subtitles.

A near-great Mann-Stewart Western, The Far Country is Recommended, despite its disappointing transfer.