Arrow Video // R // December 3, 2019
List Price: $27.99 [Buy now and save at Amazon]
Review by Stuart Galbraith IV | posted December 31, 2019 | E-mail the Author
The "easy riders/raging bulls" generation of movie brats -- directors like Friedkin, Coppola, Scorsese -- were responsible for some of the best films of the late sixties and throughout the 1970s. But while many of their movies have achieved an instant-classic status, others made by directors who for one reason another did not quite fit the mold have veered toward an unjust obscurity, even though their movies were as exciting and innovative as those made by Hollywood's New Breed. Some were Hollywood veterans whose late masterpieces failed to be appreciated in their time. Others came from the world of ‘50s live television, while others still shunned Hollywood altogether or too much a part of the mainstream for anyone to take their work seriously.

A few examples that immediately come to mind: John Huston's The Man Who Would Be King (1975), Billy Wilder's Avanti! (1972), Frank Perry's Last Summer (1969), and Michael Ritchie's Smile (1975). These are movies that were ignored or dismissed when they were new.

One of the very best of these semi-forgotten films of the '70s is George Roy Hill's Slaughterhouse-Five (1972), adapted from Kurt Vonnegut's seemingly unfilmable novel. Though it won the Special Jury Prize at Cannes, the $3.2 million film flopped at the box office and is mostly unremembered. 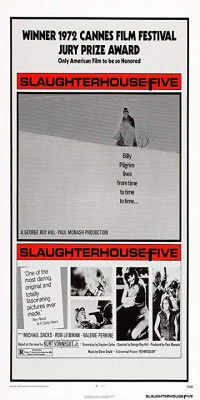 The picture is a random series of representative moments in the life of Billy Pilgrim (Michael Sacks), an ordinary, even bland everyman who as a chaplain's assistant in World War II is captured at the Battle of the Bulge and is a prisoner-of-war in Dresden, Germany, when that city was firebombed in February 1945 and more than 135,000 people died, many burned alive. (Some estimates of the dead run as high as 500,000, several times the number killed in Hiroshima.) After the war he marries Valencia Merble (Sharon Gans), whose father (Sorrell Booke) helps optometrist Billy become a wealthy pillar of the community, and whom late in life is whisked to the Planet Tralfamadore, where fourth-dimension beings mate him with soft-core starlet Montana Wildhack (Valerie Perrine). Through all this, Billy is "unstuck in time," with no control over the randomness in which the events of his life unfold.

The film is remarkably faithful to the book: Vonnegut loved it, apparently, in some interviews even stating it improved upon the novel. It's ahead of its time yet also recalls what D.W. Griffith had done inter-cutting multiple stories for Intolerance way back in 1916. Hill, screenwriter Stephen Geller, and editor Dede Allen obviously closely worked together to achieve this, and make it work by carefully bridging out-of-time sequences through various ingenious means. Some scenes are linked through props, like an army boot in 1945 that becomes a pair of dress shoes in a scene set years later. Sometimes a tight close-up of a young Billy will be followed by a cutaway, followed then by a tight close-up of Billy, only older but with his head positioned in the same way. After plainly establishing how this literary device functions in its early scenes, this cutting becomes more and more sophisticated and ambitious. Sometimes the audio from one time is carried into a new sequence, or two periods are cut back and forth to liken or contrast them. And sometimes characters from one time frame straddle another.

None of this is done for its own sake, but rather to draw attention to the many tragic and sometimes funny ironies of life, particularly the randomness of tragedy, the cruelty and senselessness of war, and of man's complete lack of control over his fate.

The centerpiece of the film is the harrowing bombing of Dresden, a semi-autobiographical aspect of Vonnegut's novel. Partly because the author actually lived through the bombing as a real-life P.O.W., these scenes have a horrifying verisimilitude and capture all manner of little details that might have been lost on anyone else. A small company supervises the prisoners and, because Germany was losing the war by this time and because Dresden was not considered a military target (its only industry was chinaware), the German company consists of a too old officer (Frederick Ledebur, previously Queequeg, the cannibal harpooner in Moby Dick) and young recruits obviously in their teens. As they march the prisoners through the streets of Dresden, children take a liking to the goofy looking Billy, until an old man steps out of the crowd to slap him and bring his fellow Germans back to grave reality. A later scene features a death so casually snuffed out that its shocking impact is greatly accentuated.

Both the novel and the book, because of all the time tripping, state plainly early on that Billy survived the horror of Dresden and watched another of the film's central characters killed. This too is done very matter-of-factly, so as the bombing nears the film achieves an enormous sense of dread. Indeed, few films up to that time were as unflinching in their depiction of wartime violence, and still shocks with its many intensely personal tragedies.

The filmmakers were wise to cast unknowns in the major parts. All are excellent, and Sacks, especially good as the film's wide-eyed innocent, is believable in makeup that takes him from his late-teens to old age.

Glenn Gould is credited with the score, which mainly has him at the piano performing music by Johann Sebastian Bach, which compliments the film and its Prague locations quite nicely. Henry Bumstead, who also is in the film playing Eliot Rosewater, does an incredible job with the film's production design. The firebombed Dresden is especially vivid, while Pilgrim's mannered postwar life is likewise handled with enormous care and precision.

Watching it for perhaps the dozenth time, now on Blu-ray, I was struck with an epiphany that I was appalled hadn't occurred to me before. It sure seems like, in the film version anyway, all the business on Tralfamadore is but a figment of Billy's imagination rather than a literal alien abduction it had always appeared to me. The movie seems to support this: though "kidnapped" in his older age, there are scenes of Billy writing to a newspaper about his abduction after-the-fact, and later arguing about it with his daughter (folk singer Holly Near) and son-in-law. Yet his Tralfamadorian keepers in other scenes insist that he cannot leave his hermetically-sealed cage, that he must remain there for the rest of his days. That Montana Wildhack is also abducted, to keep Billy company, would also appear a fantasy, as he sees her image in a drive-in movie shortly before he's "taken," and, upon arriving, is unexpectedly sexually attracted to Billy, by this point an old man.

All this would seem to suggest that Billy's fantasies are a kind of harmless coping mechanism, with Tralfamadorian philosophy a means to reconcile all the horrible things he's experienced back on earth, from the bombing of Dresden to electro-shock therapy and surviving a horrific plan crash. Perhaps.

Not long ago I'd purchased a Japanese Blu-ray of Slaughterhouse Five but was so disappointed with the transfer I stopped watching it after several minutes. I was therefore pleased to learn that Arrow Video insisted upon a new 4K scan of the 35mm original camera negative. The 1.85:1 image is quite delicate, with many soft-focus shots and a fine grain not easy to capture in 1080p format, but the transfer here is very nearly perfect, capturing the exquisite cinematography while staying true to the picture's original look. The LPCM (mono) audio is also well above average. Optional English subtitles are provided.

As usual for Arrow, the supplements for Slaughterhouse Five are voluminous, though it's too bad they weren't able to interview the surviving principal cast, of which Sacks, Gans, and Perrine are still living. (Ron Leibman, as the revenge-obsessed Paul Lazarro, died in early December, presumably after the extras were finalized. Sacks is long-retired from acting; Gans formed a controversial allegedly cult-like theater company and undoubtedly averse to additional attention these days.)

A not-very-good audio commentary by Troy Howarth blows a golden opportunity to explore this unique film, but the other extras are all worthwhile. The ubiquitous Kim Newman offers a 20-minute monologue about the picture; better still are interviews with Rocky Lang, son of producer Jennings Lang, and filmmaker-former actor Robert Crawford, Jr., who shot an unreleased documentary about the making of the film (clips of which are shown). Both have interesting, even revelatory things to say. (One notes that Kurt Vonnegut himself originally played the haughty military historian Professor Rumfoord, but that Vonnegut came across as too nice, and the sequence was reshot with actor John Dehner.)

Perry King, playing Billy's son, has some interesting observations about director Hill in particular in his interview, while film music historian Daniel Schweiger talks about Glenn Gould's score. An inapt trailer rounds out the supplements.

One of the great unsung films of the 1970s, Slaughterhouse Five finally gets both the transfer and, for the most part, supplements it deserves. A must-see and a DVD Talk Collectors Series title.