The Criterion Collection // Unrated // December 3, 2019
List Price: $39.95 [Buy now and save at Amazon]
Review by Stuart Galbraith IV | posted January 3, 2020 | E-mail the Author
One of the all-time great British films, Tunes of Glory (1960) is also the best directed by Ronald Neame, whose remarkable career spanned nearly the entire history of British cinema. Neame, who died in 2010 at the age of 99, began his career as an assistant cameraman on such films as Alfred Hitchcock's Blackmail (1929), later shooting such seminal films as In Which We Serve (1942) and Blithe Spirit (1945). He co-produced and co-adapted David Lean's Great Expectations (1946), and began directing himself the following year. In this capacity Neame has made a wide range of excellent films -- droll comedies like The Horse's Mouth (1958), searing character portraits such as The Prime of Miss Jean Brodie (his next-best film, 1969), musicals like the popular Scrooge (1970), and the best-ever disaster film (The Poseidon Adventure, 1972).

Neither cutting-edge nor flashy, Tunes of Glory has unfairly been delegated to second-tier status among British masterpieces. Made at the height of Britain's Free Cinema movement, and unwisely advertised as a follow-up (of sorts) to Bridge on the River Kwai (1957), Tunes of Glory was an anomaly and not the big success it should have been. 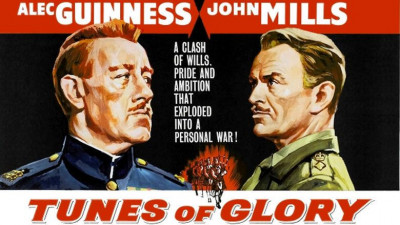 The film is set at an unnamed Highland regiment shortly after the end of the war, where its larger-than-life, generally popular acting commander, Major Jock Sinclair (Alec Guinness) is replaced with a martinet, a humorless teetotaler, Lt. Colonel Barrow (John Mills). The Oxford-educated Barrow, who places discipline above tradition, clashes with most of his officers from the start. Sinclair, lacking a formal education, earned his commission the hard way, and the men of the battalion generally see him as one of their own.

The film is like two pendulums part of the same mechanism, but swinging in opposite directions. Audiences are initially sympathetic to Sinclair while taking an instant dislike to Barrow. As the battalion's officers begin taking sides, Sinclair unpleasantly and openly defies Barrow to the point of triggering a nervous collapse. In so doing the two pendulums swing past one another and by the end of the picture their roles are almost reversed.

(Mills's character is a former POW, explicitly tortured in what today is called water-boarding.)

James Kennaway's screenplay (from his semi-autobiographical novel) does a superb job shading each character, adding a remarkable verisimilitude to regiment life down to the most minor of characters. Though filmed mostly at Shepperton Studios, Wilfred Shingleton's production design likewise feels authentic, with roaring fireplaces, worn leather chairs, and heavy wood paneling.

Much has been made of the fact that Guinness and Mills play characters that the other actor would have seemed better suited playing. Guinness, famously introverted and soft-spoken off-camera would seem better cast in the Barrow part, while Mills, known for playing working class heroes and foot soldiers, rarely titled-class types, would seem ideal as Sinclair. One contemporary reviewer even suggested Guinness and Mills should alternate the roles onstage -- a wonderful, sadly unrealized concept. In any case, both are excellent. Guinness, with the flashier, even broadly theatrical part, is larger-than-life because that's what the character calls for, though his best scenes are quiet little moments of manipulation, such as dissing his commander within his earshot. (Spoiler) Guinness's best scene has him quietly compelling a young soldier (Peter McEnery) to look at a dead body lying in a pool of blood, an unexpected moment in which Sinclair's leadership skills instinctively kicks into gear.

But Mills is at least the equal of the more actorly Guinness. His eyes are amazingly expressive, quietly sizing up his men in early scenes, fruitlessly searching for someone, anyone, to toss him a lifeline later on. His gradual, tragic meltdown is especially unnerving.

Both actors are so good it's easy to forget Tunes of Glory's peerless supporting cast. They give one of the finest ensemble performances in British cinema (perhaps equaled only by the cast of the Lean-Neame Great Expectations). Nineteen-year-old Susannah York (making her screen debut) and John Fraser are fine as Sinclair's daughter and bagpiper boyfriend, but the real treat is seeing Scotsmen like much-loved character actor Gordon Jackson, bony-faced Duncan MacRae, and diminutive Angus Lennie in unusually substantial roles. (Andrew Keir is in there somewhere, too.)

Kennaway's script carefully avoids turning the regiment into a united anti-Barrow mob -- each officer has his own reasons for siding with one or the other. Gordon Jackson's adjutant is quietly, increasingly appalled by the cruelty of Sinclair's behavior and of his followers. Allan Cuthbertson's Simpson, an English gentleman himself, is sympathetic to Barrow, but unwilling to sacrifice his relationship with the others, while Percy Herbert's RSM Riddick is driven by pure emotion. Third-billed Dennis Price plays the kind of oily character he seemed to specialize, but even his character has an admirable ambiguity about it, even as he turns on both men.

Criterion's new Blu-ray improves markedly upon its 2004 DVD version, which had a glaring flaw in the last reel or two, a dark vertical line, almost like a shadow, appearing quite prominently on the far-right side of the frame. The new 4K restoration, from the original camera negative, eliminates this entirely, the 1.66:1 widescreen image offering better resolution, color, and contrast, while the uncompressed mono audio is also fine. Optional English subtitles are included on this region "A" disc.

Disappointingly, the supplements are all ported over from the 2004 DVD, with no new extra features. Fortunately, these older supplements are good, even if they leave the viewer wanting more. Best is a 23-minute Ronald Neame Interview, filmed at the director's home. Neame offers a nice overview of the film, pointedly noting that his own style is, at its best, unobtrusive and even invisible. He points to the lengths taken to achieve this, for example never cutting while the camera is in motion. (Anne V. Coates was his editor here.) He contrasts this with the present-day, Michael Bay-style of rat-a-tat cutting, astutely observing that, in contrast with his "invisible camera" style, that today the audience has, in effect, become the camera. A Conversation with Sir John Mills is an audio-only interview with the actor. It's rather disappointing, for while the interviewer works mightily to pry answers loose from Mills, he's just not as forthcoming. Better is a 1973 BBC television Interview with Sir Alec Guinness, which goes into some depth on the actor's early years, as well as his film career prior to Tunes of Glory. A ridiculous American trailer, narrated by (I think) Les Tremayne, who badly feigns a Scottish accent, sells the film as some sort of lusty epic. Film scholar Robert Murphy provides the booklet essay.

Low-key but riveting, Tunes of Glory is a sublimely subtle tale of two men who survived the horrors of war only to become unglued by peacetime vanity. A DVD Talk Collectors Series title.