Film Movement // Unrated // December 10, 2019
List Price: $49.95 [Buy now and save at Amazon]
Review by Stuart Galbraith IV | posted January 6, 2020 | E-mail the Author
Director Fritz Lang's "Indian Epic," actually two feature films, The Tiger of Eschnapur (Der Tiger von Eschnapur) and The Indian Tomb (Das Indische Grabmal, both 1959) are visually spectacular, often startling color fantasies, difficult to describe because they were anomalies of their time. Combined, they remake the two-part 1921 German film The Indian Tomb, based on Thea von Harbou's 1918 novel, which she and Lang had adapted. Lang had hoped to direct that version, but the project was instead assigned to the more experienced Joe May. May eventually emigrated to Hollywood, where he mostly made forgettable genre films like The Invisible Man Returns and the somewhat better House of the Seven Gables (both 1940).

While collaborating, Lang and Harbou embarked on an affair while she was still married to actor Rudolf Klein-Rogge. She divorced him and married Lang, and their partnership peaked with Metropolis (1927), featuring Klein-Rogge as the mad scientist (no hard feelings, one guesses), and M (1931). Both husband and wife continued having affairs and that, coupled with Harbou's willingness to collaborate with Hitler and the Nazi Party, led to their divorce in 1933. Lang's parents were practicing Catholics, though his mother was born Jewish, and he fled Germany that same year.

In Hollywood from 1936, Lang became a naturalized citizen and eventually made 23 films in America, works including Fury (1936), Man Hunt (1941) Hangmen Also Die! (1943), The Woman in the Window (1944), Scarlet Street (1945), Rancho Notorious (1952), and The Big Heat (1953). With his career in gradual decline, Lang returned to German to make his Indian epic. Following that, he learned producer Artur Brauner was also planning a remake of Lang's The Testament of Dr. Mabuse and Lang suggested that they instead make an entirely new Mabuse film. The result, The Thousand Eyes of Dr. Mabuse (1960) turned out to be one of Lang's best films, but also his last. Failing eyesight and other health problems ended his career, though he lived long enough to enjoy a renewed appreciation of both his German silent and Hollywood sound films, prior to his death in 1976 at 85. 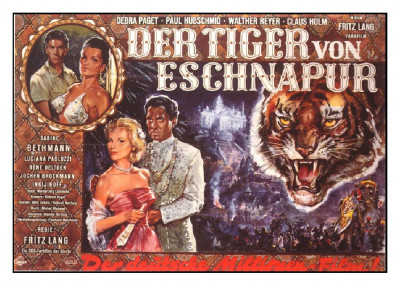 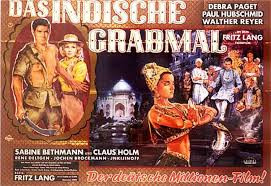 Set in a remote province of India, the story begins with German architect Harald Berger (Paul Hubschmid, of The Beast from 20,000 Fathoms) en route to the kingdom of Eschnapur, where widower Maharaja Chandra (Walter Reyer) ambitiously plans to build a modern complex of schools and hospitals. Along the way, Berger meets half-Indian/half-Irish temple dancer Seetha (Debra Paget, her character's name pronounced "Zee-ta" in German), whom he saves from a tiger. They fall in love, unaware that Chandra has already decided to take Seetha as his bride, making her the new Maharani. Chandra's brother, Prince Ramigani (René Deltgen) seizes upon Chandra's growing jealousy of Berger to both prevent the lowly dancer's scandalous ascension and assume the throne for himself. Forced to flee the charming yet ruthless Chandra, Berger and Seetha must escape into the Indian wilderness.

The two movies were shot in Eastman Color but approach the richness of three-strip Technicolor, in some respects resembling the escapist fantasies Universal made (often with Maria Montez and/or Jon Hall) in the 1940s. Leonard Maltin, reviewing the original silent version, called it "sumptuous claptrap," which pretty much sums up my reaction also. The film presents a fantasy India, apparently set in the present day yet also in a make-believe timeless universe of inexhaustible oriental exoticism. Did kingdoms like Eschnapur still exist in post-colonial India, with all-powerful authoritarian rulers? Does it matter? It's a white man imperialist's vision, no doubt, where an ordinary German architect is on the same social plane as (if not superior to) Indian aristocracy, but all this is with the same ignorant bliss of Hollywood fantasies/swashbucklers about Baghdad and the Middle East.

The film retains many of the emotions and images of the silent version. One particularly ingenious concept has Berger and Seetha hiding in a cave as Chandra's men approach, certain to spot the cave opening. An industrious spider fashioning a web comes to their rescue, its quickly constructed web convincing the soldiers that no one could have passed through without breaking it, and who therefore opt not to search inside it. Also, while the picture falls in line with Lang's career-long fatalism, in other ways it refreshingly avoids certain genre clichés. No providential volcano eruption in this story.

English-speaking audiences unfamiliar with Germany's droll Edgar Wallace films (set in England) will be nonplussed by all the German actors playing Indian characters, speaking German, a convention we've long accepted in our own Hollywood films. (Having recently watched 1976's Midway, I was struck again by the incongruous American-accented English speaking among the Japanese characters in that film.) American star Debra Paget, playing a half-Indian/half-Irish character, is herself dubbed into German, while her mouth movements suggests she spoke English on the set. Likewise, English-speaking Italian actress Luciana Paluzzi appears in the first film as an Indian maiden, also dubbed.

The picture is extraordinary lavish, real eye-candy, both in its extensive use of Indian locations (nearly half the footage), including the Lake Palace also used in Octopusy (1983), and the elaborate, gorgeously-lit interior sets filmed at Spandau Studios in Berlin. The makeup and costume design are especially impressive; somehow the German actors come off more convincing than American actors did in Hollywood movies of the same era. Reyer, Deltgen, and Jochen Blume (as Asagara, Berger's assistant) are especially good. German actress Sabine Bethmann, as Berger's sister, is an extraordinary beautiful blonde. Immediately after this she was tapped to play the female lead in Spartacus only to be replaced by Jean Simmons when director Anthony Mann was fired a few days into production.

Debra Paget had played this kind of part many times in the past, but still impresses with her acting and natural beauty. The Indian Tomb's notorious dance sequence finds Paget nearly nude; I can't think of a Hollywood actress more "exposed" in the 1934-1968 Production Code era. Yet beyond the ripe eroticism of the sequence, and it certainly has that, in spades, Paget's dancing genuinely and expertly evokes an "Indianess" than may not be authentic but which certainly appears so to viewers unfamiliar with Indian dance forms.

Each film runs about an hour and forty-plus minutes, and are a bit draggy. Each could lose a good 15 minutes with no loss to the narrative. Conversely, when American International Pictures bought the U.S. theatrical rights, they combined the films into a single, 94-minute whirlwind called Journey to the Lost City, the picture trimmed to less than half its original length.

Fantoma's 2001 DVD release was a revelation, the Blu-ray, from a new 4K master, is several steps better in terms of clarity and color. On my projection system and 10-foot screen, both movies looked splendiferous, with only a few dodgy dissolves drawing attention away from the show. In his review Cinesavant makes the case that the 1.37:1 is incorrect, that the movies should be in 1.66:1 widescreen. Maybe, though it appears at least some West German films were released 1.37:1 standard format as late as 1959-60. DVD and later Blu-ray releases of the earliest Edgar Wallace movies are also standard format. My guess is that Lang framed the films for both formats, aware that they'd be cropped to 1.66:1 for release in other parts of Europe and in America. It's true some of the framing is overly roomy, but not nearly as much as late-‘50s American films meant for 1.66:1 or 1.85:1 cropping that for decades were only available full-frame. The Dolby Digital mono is in German only, with good and unobtrusive English subtitles. The region "A" encoded set puts one movie each on the two discs, with the extra features spread throughout.

Supplements include a marathon audio commentary by Tim Lucas, who does his usual superlative job cramming the 200-minute epic with astute observations, putting the visuals, production, cast, and Lang's career into cultural and industrial context. (I do with the recording were better, however. It sounds like it was recorded in a closet.)

A making-of documentary likewise goes into a lot of detail, and invaluably includes behind-the-scenes footage and interviews with surviving members of the cast and crew.

Debra Paget, For Example (2016) is a flabbergasting, not so much as a quirky (to say the least) video essay about the Hollywood star, but for reasons I'll come to shortly. Director Mark Rappaport's (Rock Hudson's Home Movies) 36-minute film incorporates clips from as many as four-dozen Paget films to contextualize the actress's screen persona and career, with Caroline Simonds portraying Paget in narration, presumably taken from quotes (?) by the still-living if long-retired actress. The orgy of clips appears sourced from the latest available masters, glorious high-def excerpts from The Ten Commandments and Demetrious and the Gladiators, for example, while other excerpts appear ripped from DVDs, VHS tapes, and maybe even off cable-TV. Maybe Rappaport has unparalleled influence in the industry or incredibly deep pockets, but normally to license all this material, from perhaps a dozen different libraries, and assuming they'd be willing in the first place, would normally be prohibitively expensive, easily $100,000 for a show like this, perhaps far more than that. I'm not accusing Rappaport of using unlicensed clips; I just wonder how he did it. And, whether Fritz Lang's Indian Epic can remain in circulation with this show included. Interested parties are strongly advised to pick this title up now just in case it's pulled.

A 20-page booklet, with an essay by Tom Gunning, rounds out the supplements.