The Criterion Collection // Unrated // January 28, 2020
List Price: $39.95 [Buy now and save at Amazon]
Review by Stuart Galbraith IV | posted January 31, 2020 | E-mail the Author
Unique in cinema history, the same Hollywood company released two movies within the same year telling virtually the same story, about a group of U.S. bombers ordered to drop nuclear bombs on the Soviet Union without the authority of the President. Each is excellent yet in other respects they couldn't be more different. The movies, of course, are Stanley Kubrick's Dr. Strangelove and Sidney Lumet's Fail-Safe. The projects were so similar, in fact, that Kubrick and author Peter George (author of its source material, the novel Red Alert) filed suit against the authors of Fail-Safe, Eugene Burdick and Harvey Wheeler, as well as producer Max E. Youngstein, who acquired the film rights.

In the end Columbia released both films many months apart, Strangelove in January 1964, and Fail-Safe the following October. Strangelove was a big hit, Fail-Safe was not, despite excellent reviews. (Fail-Safe should have been released first.)

And the excellent reviews were well-deserved. Even now, Fail-Safe is riveting and deeply disturbing, even after multiple viewings, not to mention equally relevant now, perhaps more so. Watching it in 2020 one is struck by how measured, how calm, cool, and collected the President, played by Henry Fonda, is in this film, exactly the kind of man you'd want in an existential moment of crisis. I'd bet even his supporters would agree Fonda's President is nothing like the current occupant of the White House. 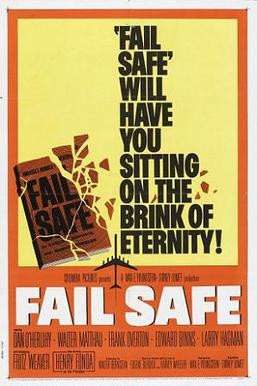 At Strategic Air Command (SAC) headquarters in Omaha, Nebraska, the Air Force's early-warning system picks up a blip, an unidentified flying object flying over Canada toward Detroit. General Bogan (Frank Overton) and Col. Cascio (Fritz Weaver) aren't terribly concerned, as it's probably nothing more than a commercial airliner off-course, a not-uncommon occurrence, though visiting Congressman Raskob (Sorrell Booke) and software manufacturer Sullivan (Frank Simpson) are rattled by SAC's standard operator procedure to send nuclear bombers to their fail-safe destinations. The off-course airliner's identity is confirmed, and the alert is cancelled, but a computer failure inadvertently sends final orders to one bomb wing, led by Col. Jack Grady (Edward Binns), to attack Moscow. Further, SAC is unable to contact the wing group and inform them of the error by radio, apparently due to a new Soviet jamming system.

The event interrupts a meeting at the Pentagon chaired by Defense Secretary Swenson (William Hansen), attended by Brig. Gen. Warren "Blackie" Black (Dan O'Herlihy) and hawkish civilian advisor Professor Groeteschele (Walter Matthau). Elsewhere, in the subterranean bunker under the White House, the President (Henry Fonda) and his new Russian interpreter, Buck (Larry Hagman), anxiously prepare to speak on the "hot line" with the Soviet Premier if the bombers can't be reached or shot down.

After the first 15 or minutes, virtually the rest of Fail-Safe is confined to those three locations: the featureless, small room where the President and Buck wait, consisting of little more than a telephone system, table, and chairs; the cramped situation room at the Pentagon; and the larger SAC headquarters, with its big screen monitor tracing the movements of the fighters and bombers. Fail-Safe may be the first-ever dramatic feature in which so much screentime is devoted to people worriedly looking at computer screens, a cliché of virtually every high-concept action-adventure and fantasy film since computers became commonplace.

Yet despite the quaintly crude computer imagery (actually animated cells, projected via front- and rear-screen processes), the characters and deliberately claustrophobic trappings (recalling Lumet's earlier 12 Angry Men) make the last 90 minutes of Fail-Safe almost unbearably suspenseful. Lumet always knows exactly where to point the camera, how close to move in on the actors' faces, and when to cut away to reaction shots. (Makers of high-concept movies would do well to study this film's editing closely. Ralph Rosenblum was the editor.) The absence of a musical score, with sound effects sparingly used for punctuation also add to its effectiveness.

Lumet was greatly influenced by European and Japanese filmmakers, with Fail-Safe looking nothing like a conventional Hollywood film, nor is it filmed in the semi-documentary style one might have expected. Coincidentally echoing the disorienting opening of John Frankenheimer's The Manchurian Candidate (1962), Fail-Safe opens with a title card providing the time and place (New York City in the early morning), only to cut to a bullfight, uneasily observed by General Black, in images strangely processed. It turns out to be a recurring nightmare, while the film is bookended by another avant-garde sequence, horrifying in its simplicity, but crystal clear in its meaning. Shortly after the introduction of Gen. Black, there's a long scene with Matthau's smug professor attending a party that finally breaks up after dawn, a sequence shot much more like a French or Italian (or maybe French-Italian) production than an American one, with a party guest sexually aroused by Groeteschele's advocacy of mass murder.

Matthau up to this point had almost exclusively played heavies and, though his character accurately represents the views of hawks like Edward Teller and others even more extreme, Matthau's performance is only fair, especially in juxtaposition to Dan O'Herlihy's troubled general, deeply conflicted by his role in a Cold War strategy that may bring about the end of civilization. His final scenes in the movie are genuinely gut-wrenching, so compelling is the actor.

The SAC sequences have many fine moments, from the equally unexpected small but significant straight dramatic role played by Dom DeLuise, struggling through a direct order from Gen. Bogan as unnatural to his military senses as pounding one's face with a mallet; to Bogan's wistful telephone conversation with a Russian counterpart. Looking at his file (including a portrait photo), Bogan realizes the man at the other end of the line is one very much like himself. Fritz Weaver, a prominent guest-star on myriad dramatic TV anthology shows (Twilight Zone, etc.) made his film debut here, but his part is badly defined. In an early scene he pays a reluctant visit to, apparently, alcoholic parents living in an Omaha slum. His character seems to have gotten out of that unbearable environment through the military, and when that ridged structure unravels so does he. It's a colorful part but takes attention away from the picture's otherwise taut storytelling.

In the end, the scenes with Fonda and a surprisingly valid Larry Hagman, who more than holds his own with the veteran actor, that keep audiences most riveted. (I saw this in 35mm once about 30-plus years ago; there were, maybe, 300 people in the audience and one could hear a pin drop.) The basic theme, naturally, is that nuclear war, even limited nuclear war, would be immoral on a global scale even if one could prevent 100% an accident like that in the film from ever occurring. That we can't makes disarmament all the more imperative. The film closes with, arguably, the most disingenuous footnote/disclaimer in Hollywood history, a statement from the Department of Defense insisting that such an accident in the film could never happen. At that same screening years ago, the movie audience responded with appalled laughter and catcalls.

Criterion's Blu-ray of Fail-Safe utilizes a new 4K scan, "primarily from the 35mm original camera negative." Presented in 1.85:1 widescreen, the black-and-white image is nearly flawless, and the remastered mono soundtrack impresses as well. Optional English subtitles are provided on this Region "A" encoded disc.

Surprisingly, there's little here that's new. Lumet's audio commentary track from 2000 is preserved, as is "Fail-Safe Revisited," a typical studio-made featurette obviously tied to the very good 2000 remake, done as a live television drama. (That would have been the thing to include, but presumably licensing costs and/or rights issues prevented this.) What's new is a video essay by critic J. Hoberman that puts the film into cultural and industrial perspective; and a booklet essay by Bilge Ebiri.

A must-see, Fail-Safe is a DVD Talk Collectors Series title.