Kl Studio Classics // Unrated // April 7, 2020
List Price: $24.95 [Buy now and save at Amazon]
Review by Stuart Galbraith IV | posted April 1, 2020 | E-mail the Author
It's not every day classic horror film admirers get the chance to see a "brand-new" title, one heard about but never seen through the decades. That, at least, is true for me with regard to Supernatural (1933), a strange jumble of a movie telling and eventually fusing two contrasting stories at once: one concerning a fake spiritualist's efforts to bilk a grieving heiress, the other about "real" afterlife possession, in this case by an executed serial murderess. Horror trappings are present throughout though it still only barely qualifies as a horror film. Carole Lombard, way out of her element but still appealing, stars. 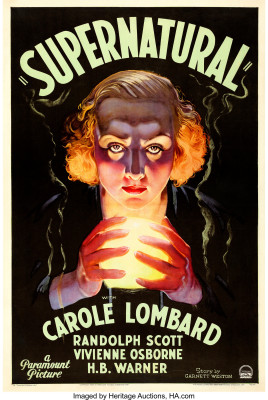 The short (65-minute) film opens well, then slows way down for a stretch of mostly ordinary drawing room chitchat, then builds up steam again for its climax.

Unrepentant three-time murderess Ruth Rogen (Vivienne Osborne) is on death row, having strangled three former lovers. A fourth, Paul Bavian (Alan Dinehart), a fake psychic and conman, escaped death by informing the police of Rogen's whereabouts, leading to her arrest. Prior to her execution, esteemed physician Dr. Carl Houston (H.B. Warner), theorizing that copycat murders are actually the result of possession by the evil souls of executed murderers (!), obtains permission to experiment on Rogen's corpse after her trip to the electric chair.

Dr. Houston also happens to be a family friend of heiress Roma Courtney (Carole Lombard), inconsolable since the death of her beloved twin brother, John. Dr. Houston, family estate manager Nicky Hammon (William Farnum), and Roma's fiancé, Grant Wilson (Randolph Scott), are aghast when Bavian contacts Roma, claiming to be the recipient of an urgent message from the John in the Great Beyond.

Non-believer Grant agrees to accompany Roma to Bavian's shabby apartment, nonetheless decked out with lighting and other effects he activates during his "séance." Shortly before they arrive, Bavian murders his landlady (Beryl Mercer) when she tries to blackmail him, killing her to death with a ring with a poison-tipped needle. The séance sequence is a both effectively spooky and absurd at once, and an obvious influence on Ed Wood's long-unreleased Night of the Ghouls (1957).

Meanwhile, in his Park Avenue apartment laboratory (!), crackling with the usual electric show, Dr. Houston animates Rogen's corpse and her spirit enters Roma's body, determined to get her revenge against Bavian. If that weren't enough, John's spirit is floating about, too, trying to set things right.

The movie was made the Halperin brothers, producer Edward and director Victor; their White Zombie the previous year had been a huge hit by independent movie standards. At the time the eight major film companies had a virtual stranglehold on distribution, leaving crumbs for independent producers who already lacked the finances to produce and self-distribute their movies. Yet, White Zombine, which cost a pittance at just $50,000, may have earned ten times that or more, prompting Paramount to not only produce and distribute their next effort, but also to provide two rising stars, Lombard and Scott.

The movie isn't all that good, with its bifurcated plotting that never quite gels, though it undeniably has beguilingly eccentric components. The mini-spotlight effect used on Bela Lugosi's eyes is redone here but with Carole Lombard. There are a number of impressive miniature effects, the opening montage is very effective, and Dr. Houston's penthouse laboratory is certainly unique. Some of the picture's pre-Code salaciousness is interesting, while other aspects are, in retrospect, unintentionally funny: newspaper's reporting the brother's dead note his passing is "keenly felt in aviation and polo circles," for instance.

As in Murders in the Zoo (1932), Randolph Scott is pretty much wasted as the tuxedoed young hero, but Vivienne Osborne is terrific as the unrepentant murderess. Lombard, reportedly unhappy at being assigned the film, is gorgeous to look at and okay generally, but a Scream Queen she is not. H.B. Warner's innate gravitas makes his mad scientist appear less insane than one might imagine, while Beryl Mercer is quite good, more like something out of a stylish ‘40s British thriller than the ludicrous potboiler this is.

Kino's 2K remaster of Supernatural allows first-time viewers the opportunity to see the film in the best possible light, the image impressively sharp with good contrast for an early '30s title. The DTS-HD Master Audio (1.0 mono) is also better than one usually gets for films this old. Optional English subtitles are provided on this Region "A" disc.

Included is an original trailer, but the big news is another fine audio commentary track by Tim Lucas, who crams a lot of good info into the picture's short running time.

Far from great but irresistible to classic horror fans, for them Supernatural is Recommended.