Film Movement // Unrated // March 10, 2020
List Price: $44.95 [Buy now and save at Amazon]
Review by Stuart Galbraith IV | posted April 3, 2020 | E-mail the Author
Film Movement's welcome release of two classic Ealing Studios comedies arrives more than a dozen years after they were last seen as part of Anchor Bay's Region 1 DVD Ealing boxed set. Both are set in rural Scotland, and both are directed by Alexander Mackendrick (The Man in the White Suit, The Ladykillers), one of the primary auteurs of Ealing whimsy. 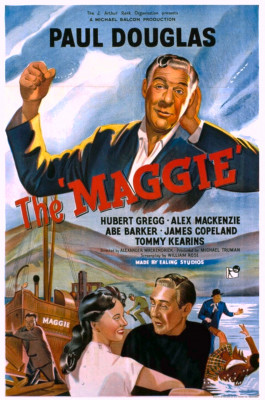 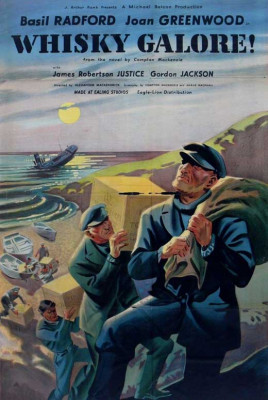 The Maggie is like a distant ancestor of Bill Forsyth's wonderful Local Hero (1983). Both are fish-out-of-water tales about American businessmen bemused by a very different way of life in rural, working-class Scotland. In The Maggie, American airline executive Calvin B. Marshall (Paul Douglas) wants to ship several tons of furniture to a small island near Kiltarra, for a summer house he plans to surprise his wife with. Unable to secure a cargo vessel from Glasgow shipper Campbell (Geoffrey Keen), Marshall turns to MacTaggart (Alex Mackenzie), skipper of The Maggie, a lowly, broken-down "puffer," a coal-fired, single-masted cargo ship long past its prime To say the ship is in a state of disrepair would be a gross understatement, and the same could be said for the skipper and his raggedly crew: its mate (James Copeland), diminutive, elderly engineer (Abe Barker), and young Dougie (Tommy Kearins), affectionately known as "the Wee Boy."

Naturally, the voyage is a disaster, and no amount of effort on Marshall's part can speed her along. The ship runs aground on a subway before it even leaves the harbor, the old boat has constant engine problems, and Marshall's problems become the laughing stock of Scotland, in a series of newspaper articles following the journey. (The reporter covering the lack of progress is played by the familiar Andrew Keir.) Director Alexander Mackendrick (The Ladykillers, Sweet Smell of Success) and co-writer William Rose (The Smallest Show on Earth, It's a Mad, Mad, Mad, Mad World) infuse the script with many magical moments throughout, yet succeed in keeping its story dark and amusingly cynical, rather than nostalgic and sentimental.

Neither Marshall nor The Maggie's crew come off as innocent victims. Marshall is played for a sucker by the wily, mischievous skipper, while the American's trials and tribulations aboard ship make him rethink his harried, executive lifestyle much like Peter Riegert's character in Local Hero. The skipper and his men represent a way of life quickly vanishing in postwar Scotland, and their simple, leisurely ways (the stop en route to poach pheasant, for instance, and later attend an old pufferman's 100th birthday party) contrast amusingly with Marshall, whose sense of urgency is looked upon with genuine puzzlement. "That would be the American way," Mactaggart says, "everything in a rush." And yet innocents they're not. Even the Wee Boy proves to be capable of surprising violence when desperate enough.

The film has its share of delightful sight (and, sometimes, sound-) gags and amusing concepts, such as the Wee Boy's "radar" as The Maggie makes its way through a thick fog: he throws lumps of coal a few yards ahead of the bow. If he hears them plop into the water, he knows the ship is fine, but....

Paul Douglas, a former sportswriter-turned movie actor, was one of dozens of Hollywood near-stars or fading stars who traveled to Britain in the 1950s to make films there. (Douglas went back in 1956 to star in The Gamma People, while his wife, actress Jan Sterling, appeared in the film version of 1984.) His gruff appearance yet soft voice is well suited to his character here. Likewise, Mackenzie, Copeland, Barker, and Kearins were virtually unknown outside of Ealing, and really look as if they've just come ashore after months at sea. Besides Keen the only other familiar actors in the cast are character actor/lyricist Hubert Gregg and the both young and beardless Andrew Keir. Also worth noting is John Addison's delightful score, with a sweet main theme written for concertina.

Whisky Galore! moves the action to a remote island in the Hebrides. Set in 1943, the island of Todday is hit with news worse than a Nazi invasion: there is no whisky! Denied the "water of life," the island's hardy fishermen are reduced to jelly, bed-ridden, and distraught. Until, that is, a cargo ship carrying 50,000 cases of whisky crashes on her rocks, and the town's residents conspire to whisk her cargo to safety before she goes under.

But this miraculous bit of serendipity is threatened when by-the-book, stick-in-the-mud Captain Waggett (Basil Radford) takes his position as C.O. of the Home Guard a bit too seriously. Naturally, he wants to see the answer to the island's prayers duly returned to England.

As usual for Ealing, the picture is brimming with delightful character portraits, from a dying man's (James Anderson) resurrection with the arrival of the salvaged liquor, to mama's boy George's (Gordon Jackson) hilarious defiance of his stern, religious mother (Jean Cadell) after finding courage in several drams of the newly-opened whisky.

Though a comedy, the film has exceptionally dramatic monochrome photography by Gerald Gibbs, images so good as to evoke memories of another classic of British cinema, Michael Powell's The Edge of the World (1937). The mostly Scottish cast includes perennial favorites like James Robertson Justice, Gordon Jackson, and Duncan Macrae (Finlay Currie narrates), but also eccentrically sexy Joan Greenwood, she adding a Scottish burr to her distinctive voice. The picture was followed by a sequel nearly a decade later, Rockets Galore! (1957), a lesser film but still worthy of a Blu-ray release of its own.

Though Whisky Galore! is by far the more famous of the two (reflected in the extra features content), I much prefer the more intimate, more subtly sly Maggie, which also boasts a more authentically Scottish cast. (Good as they are, Greenwood, Justice, and, in a minor role, John Gregson, aren't entirely convincing.) There's more the mob mentality, peppered with colorful vignettes, in Whisky where The Maggie offers deeper and more interesting (and droll) characterizations, a stronger story, and is a bit less precious. However, both pictures are quite delightful.

Film Movement presents both black-and-white films in their intended 1.37:1 standard ratio. (The Maggie was shot in 1953 and released in 1954, when even most pictures shot standard ratio were slightly cropped for widescreen exhibition, but apparently The Maggie was always exhibited 1.37:1, at least in the U.K.) Both generally look good in these recent restorations. Whisky has some inherent minor issues dating back to the original production/cutting, while The Maggie exhibits fine negative scratch lines but is sharper with blacker blacks. These are minor complaints as they improve markedly from Anchor Bay's DVD versions, and mostly look fine. The movies are presented on separate discs. Audio is LPCM 2.0 mono, with no subtitle options provided on these region "A" encoded discs.

The disc for Whisky Galore! includes an informative audio commentary by John Ellis, who also produced the archival, nearly hour-long featurette "Distilling Whisky Galore!" which includes some great then-and-now comparisons of the locations used and interviews with the locals recalling the film's production. Filmed sometime in the 1990s, it's a nice supplement. "The Real Whisky Galore!", running about 20 minutes, is a strange extra, featuring an interview with a man never identified, who discusses the historical basis for the film. A small booklet rounds out the extra features.

Charming comedies both, Whisky Galore! and The Maggie offer an ideal escape during these days of self-isolation with the set a DVD Talk Collectors Series title.