Kl Studio Classics // Unrated // April 7, 2020
List Price: $24.95 [Buy now and save at Amazon]
Review by Stuart Galbraith IV | posted April 9, 2020 | E-mail the Author
The best-known film version of P.C. Wren's 1924 adventure novel, William A. Wellman's film of Beau Geste was released during that banner year of 1939, when it seemed Hollywood was cranking out only classic films. It's less dated than the similar Gunga Din from that same year, has many uniquely unforgettable moments and a few equally unforgettable performances amidst its great cast of big-name actors and iconic character stars (including several big surprises). Certain aspects of the film haven't aged well, particularly the romanticizing of battle as glorious fun, but, overall, it's an immensely satisfying picture. 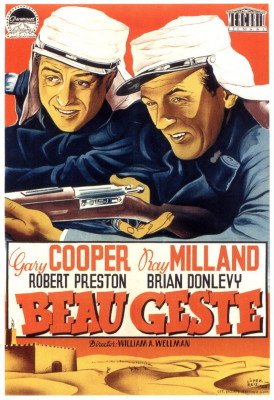 Remaking the 1926 silent film (which starred Ronald Colman), the picture opens with one of the best prologues ever done: French Foreign Legionnaires cautiously approach the small fort of Zinderneuf, in the middle of the desert. After a single gunshot from the fort, all becomes quiet. Bugler Digby Geste (Robert Preston) volunteers to scale the wall to investigate, but vanishes without a trace behind its walls, prompting Major de Beaujolais (James Stephenson) to personally investigate. Sheepishly approaching, he discovers all the men in the embrasures are dead: propped up, with their glassy eyes wide-open. Digby is nowhere to be found. The major finds one corpse clutching a letter, confessing to the theft of a rare sapphire, the Blue Water, belonging to the Brandon estate. Moments later, the fort is engulfed in a conflagration and the troops retreat to a nearby oasis. What's going on here?

The story flashes back to the Brandon estate fifteen years earlier, where orphaned brothers Beau, John, and Digby Geste, along with ward Isobel Rivers, are being raised by their kindly guardian, Lady Patricia Brandon (Heather Thatcher). Just as they were in childhood, as young adults Beau (Gary Cooper), John (Ray Milland), and Digby are inseparable, if hungry for adventure. John has fallen in love with Isobel (Susan Hayward), and the trio are concerned about their beloved benefactor's money troubles. Will she have to sell the Blue Water to pay off her debts? The question becomes moot when the sapphire is stolen, apparently by one of the Geste brothers. Which one?

In wanting to protect one another, each in turn confesses, and all eventually run off to join the Foreign Legion. At Fort Saida, the brothers, reunited befriend big American cowboy Hank Miller (Broderick Crawford) and tiny Paddy McDonigal (Charles Barton, later the best director of Abbott & Costello comedies), but are wary of weaselly Rasinoff (J. Carrol Naish), who learns of the stolen jewel, and their sadistic sergeant, Markoff (Brian Donlevy). When Markoff also learns of the sapphire, he conspires to separate the brothers to get the 30,000-British pound gem for himself. When the commanding officer dies and Markoff greedily takes command, and following a stifled mutiny instigated by hothead Schwartz (Albert Dekker), Markoff orders Beau and John to join his contingent of troops marching to Zinderneuf.

The sub-sub-genre of French Foreign Legion movies pretty much went kaput following Dick Richards's March or Die (1977), with Gene Hackman, Terence Hill, and Catherine Deneuve; and Marty Feldman's mostly terrible comedy The Last Remake of Beau Geste that same year. Other than the Jean-Claude van Damme Legionnaire (1998), I can't think of a major film to touch the subject since.

Yet, a more historically authentic, revisionist remake of Beau Geste might just work. Wellman's film is splendid in many respects, though certain aspects didn't play all that well then or haven't aged well since. The flashbacks with the Geste brothers in childhood and, later as teenagers, serves to cement their relationship to one another, and their mutual devotion to Lady Brandon, but their dialogue is pure 1930s Hollywood kid-talk, far removed from the way real children interact. (At the time, only the "Our Gang" shorts produced by Hal Roach really did this well.) Amusingly, the teenage Beau is played by 13-year-old Donald O'Connor -- to see him "become" Gary Cooper later on is jarring in retrospect.

Coop himself was neither British nor 20ish, as he was pushing 40 in 1939 and hardly the youthful lad he's alleged to be. His magnetic screen presence compensates somewhat, but he's really miscast. (Ray Milland and especially Robert Preston come off fine, however.)

But the performance everybody remembers in Beau Geste is Brian Donlevy's sadistic sergeant. It's an imposing character and a performance often imitated but never really equaled. Part of what makes the character so threatening and mesmerizing is that his ruthlessness is equaled by his abilities as a leader-in-battle: as monstrous as Markoff is, when Arab Tuaregs lay siege on the fort, he's the guy everyone wants in charge and, boy, does he prove his mettle. Except for R. Lee Ermey's dehumanizing drill sergeant in Kubrick's Full Metal Jacket (1987), no other screen character comes close. It rightly made Donlevy a star not limited to villainous parts; he commands the screen in every scene he's in, this despite the short actor's obvious use of lifts.

Even the home front scenes and all the business with the missing sapphire and Lady Brandon pay off splendidly in the end. The screenplay and, presumably, the original novel have their surprisingly share of plot twists, surprises I won't reveal here. Combined with Wellman's outstanding direction, Beau Geste is still exciting more than 80 years after it was made.

Kino's Blu-ray of Beau Geste, a 4K restoration licensed from Universal (as part of their Paramount catalogue) looks terrific in its original 1.37:1 standard, black-and-white form. At one point there's a huge negative scratch for about 20 seconds that might have been digitally minimized, but otherwise it looks great. The film was apparently cut by about five minutes when it was reissued in 1950; that footage is presumed lost, as are pre-release scenes running several minutes trimmed to conform with the Production Code, and possibly for other reasons. The DTS-HD Master Audio (mono) is also fine, supported by optional English subtitles. Region "A" encoded.

Other than a trailer there's just one supplement, but it's a really good one: an audio commentary by Wellman biographer Frank Thompson and William Wellman, Jr. Together they pack both an enormous amount of fascinating material on the film's background and production combined with personal observations and reminiscences. It's an outstanding track.