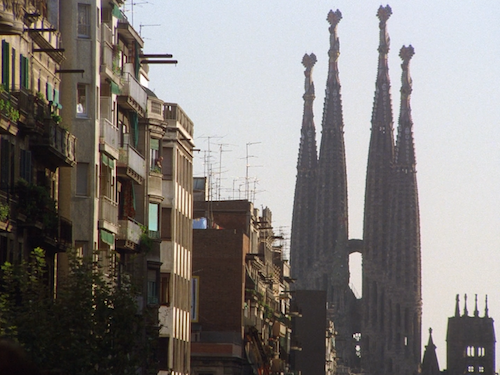 Hiroshi Teshigahara's 1984 film Antonio Gaudí is ostensibly a documentary about the famed Catalan architect of the title. However, those looking for background on Antoni Gaudí's life, or a synthesized understanding of his work, should seek a more straightforward doc about him (Criterion has handily provided two of those in this disc's bonus features [see below]). Teshigahara instead crafts a dreamy, impressionistic study of both Gaudí's buildings and of his homeland that has been oft-described -- aptly -- as a tone-poem.

Structured somewhat like a travelogue, the film soaks up bits of Catalan art and culture between visual investigations of Gaudí's different creations. This includes folk dances in a city square and shots of a bustling fish market in Barcelona. This approach creates a natural context for Gaudí's work, locating its place both within Catalan art and within Catalan life. While examining the Parc Güell designed by Gaudí, we see visitors jogging and playing, others lounging on multi-colored serpentine benches made from broken-tile mosaics, and even a small girl roller-skating around Gaudí's pillars.

Teshigahara sometimes creates a steady editing tempo by juxtaposing angles from different close-up details, but just as often he lets Junichi Segawa's camera float into and around the spaces that Gaudí created in long takes. The accompanying musical score by Toru Takemitsu often consists of sparse ethereal tones, suggesting a somber spirituality well-suited to the subject.

Segawa inspects and traces Gaudí's shapes, which are rarely regimented into straight lines. Inspired by natural forms, Gaudí's designs curve and undulate. Façades droop like they are covered in stalactites or were melted away like wax. An apartment building he designed, Casa Milà, looks like a vision from a Cronenberg body-horror flick. The roof of another building, Casa Batlló, looks like the multi-colored scales of a giant tropical fish.

The film climaxes, as it logically must, with an exploration of Gaudí's unfinished magnum opus, the Basilica of La Sagrada Familia. It's a giant church whose four main spires are so tall that they are visible from other Gaudí works throughout Barcelona. (Teshigahara essentially teases La Sagrada Familia earlier in the film by presenting it obviously in the background of other segments.)

The importance of La Sagrada Familia is such that Teshigahara even breaks protocol an hour into his film and includes an interview with one of Gaudí's then-living collaborators, Isidre Puig Boada, to comment upon Gaudí's working method and his eventually thwarted vision for the church. (His design models were destroyed after his death, and the church currently remains a work-in-progress.)

Antonio Gaudí can be a bit like a trip through a beautiful art museum where you don't pay for the guided tour or even bother to read any of the placards. For some, it will surely be a wonderful and unfettered experience; others might find themselves hungry for hard info. This reviewer cheated and watched the bonus features first to get some background, so I could just enjoy the mood and style of Teshigahara's film without fretting too much that I wasn't properly understanding things. It worked for me; maybe it can work for you too. 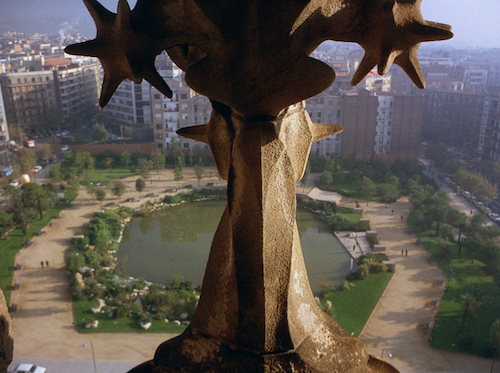 The Blu-ray
Antonio Gaudí comes with the bulkiest booklet I've seen with a Criterion Blu-ray in quite a while, presumably because this is an upgrade from Criterion's 2008 DVD release. It includes an essay by Dore Ashton, as well as two separate pieces by director Hiroshi Teshigahara, one in conjunction with his father Sofu.

The Video:
Some other reviews suggest that this AVC-encoded 1080p 1.33:1 presentation is most likely sourced from the same transfer that was used for the 2008 DVD, although there are no major drawbacks to this transfer that I could spot. Excellent, rich color reproduction, with strong detail and contrast. Some instances of minor film damage, but in general this is up to the quality one expects from Criterion.

The Audio:
Almost no dialogue in this LPCM mono audio mix, apart from two brief moments in Catalan and Japanese with optional English subtitles. The soundtrack commonly consists of some mild location sound and Toru Takemitsu's score, which encompasses new age-y ambient tones and string orchestra performances -- sometimes in tandem. I watched part of this with headphones and was able to pick up consistent surface noise, but in a typical living room setting, it's not distracting.

Special Features:
These have been ported over from the 2008 2-DVD Criterion release.


Final Thoughts:
A mostly wordless exploration of the architecture of Antoni Gaudí that's both soothing and exciting to watch. Highly Recommended. 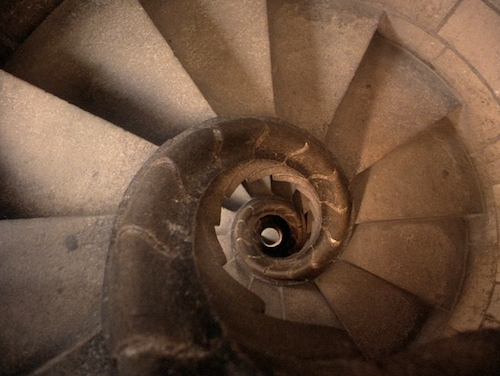