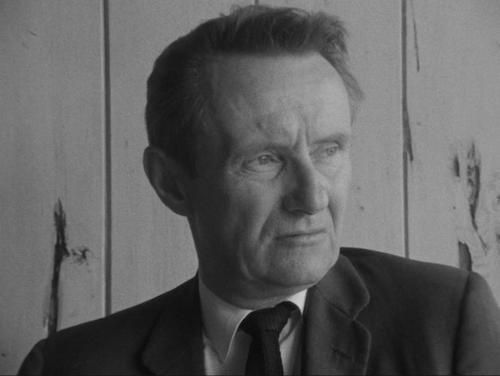 The documentary Salesman, shot in the mid-'60s and released in 1969, is a landmark film. It might feel odd to read a declaration like that about a work whose style is fairly modest and whose subjects are quite unassuming, but Salesman's storytelling is so intelligent, revealing, and artful that its indelible mark is left not only on viewers but on the whole art-form of nonfiction cinema.

Salesman follows four Irish Catholic bible salesmen from Boston, as they make their daily rounds. Their company has partnered with local churches to get folks to state their interest in fancy new bibles, and then the door-to-door men have to go in and seal the deal. But quite often, by the time the salesmen come to visit, things have changed. Money has gotten tight. Interest has waned. After all, how many bibles does one family really need? And at $50 a pop (roughly $350 in 2020 money), how many of these working class and working-poor families can actually afford it?

As the film illustrates, these encounters aren't exceptional. The salesman hears "no" all the time, but the talented ones know how to turn it around and make their commission. From its four subjects, the film finds its main character in Paul Brennan (nicknamed "The Badger," maybe for less than flattering reasons) because lately he can't turn the "no"s into "yes"s. Paul's cold streak makes him bitter which, in turn, sours his sales pitches and kills more potential sales.

Even when the four salesmen leave icy Boston for sunny Florida in the film's second half, Paul can't catch a break. He starts off with good intentions, but is soon waylaid by the confusing lay-out of an Arabian-themed neighborhood with street names like Sharazad Ave. and Sinbad St. It doesn't help that Paul is also so stubborn that he expends more effort to mock a guy he stops to ask directions rather than listen to what the guy actually says.

The film doesn't add talking-head commentary from sociologists or economists on the degradation and commodification of American religious life, because it doesn't have to. All you need to do is watch these hard-sell encounters unfold. This isn't just a bible: it's educational, it's art, it's a financial investment, it's an investment in the future of your family. These bibles become whatever the salesmen think the customers need them to be. And the customers sometimes succumb thanks to their own guilt and decency, not wanting to lead-on the kind salesman who they invited into their home.

The film sees these men as generally decent too. They just want to make a living, and they do it in the way that they have been shown. There are a few different sales conferences shown in the film, where the bible company higher-ups scold and cajole their workers to rack up higher sales numbers. The salesmen are told that they are a positive force for their communities. So: SELL! SELL! SELL!

Since there are no designated bad guys, viewers can easily find themselves quietly cheering for both sides in these awkward selling encounters. Maybe the elderly couple will reconsider and sign up for the cheaper monthly package. Maybe the salesman will realize this poor housewife is already pushed to her limit and will humanely let her off the hook.

Salesman was shot with specially made lightweight equipment to facilitate easy filming both for the subjects and for the sole crew members, Albert Maysles (camera) and David Maysles (sound). (Editor Charlotte Zwerin shares the possessory "A Film by" credit on the film.) Their unobtrusive style has been dubbed a "fly on the wall" approach or "cinema vérité." In the contemporaneous interview included on the Salesman disc, the Maysles brothers shrug off both of these terms, in favor of the more accurate phrase, "direct cinema."

And it is Salesman's directness that makes it so powerful. It finds the drama in the unforced reality of daily life. Of course, the process of filming something changes it. But, in a lucky-lottery-ticket way, the Maysles found subjects that are barely influenced by the presence of the camera. At one point, a customer randomly puts on a warped Beatles Muzak record to enjoy mid-sales pitch. It's hard to imagine such a guileless move from a documentary subject now, post-reality TV. That moment is innocent, ugly, sad, and funny: just like the film that contains it. 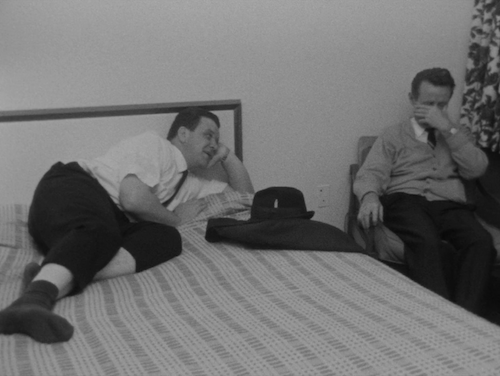 The Blu-ray
Salesman is packaged with fold-out featuring an essay on the film by Michael Chaiken.

The Video:
Sourced from a 2017 restoration, this AVC-encoded 1080p 1.33:1 transfer is highly rewarding. Much like Criterion's Robert Drew set from a few years ago, this disc boasts excellent clarity and contrast for a 16mm film that was shot cheaply and quickly with available light. Some minor damage here and there, but for the most part, this looks outstanding.

The Audio:
The LPCM mono audio is necessarily limited by the technology with which it was captured, but it never sounds distorted or overwhelmed by surface noise. It's fascinating the way that the "Globesman" parody (see Special Features below) goes to the trouble to duplicate this specific narrow kind of soundtrack. Optional English SDH are provided.

- An extremely valuable commentary, ported over from the 2001 Criterion DVD. Maysles manned the camera, while Charlotte edited the film.

Final Thoughts:
Salesman eloquently speaks about the American experience just by letting it play out on screen. Criterion's original DVD presentation was already strong, but with the A/V quality boost of Blu-ray and the delightful inclusion of the related Documentary Now! material, this release easily makes it into the DVD Talk Collector Series. 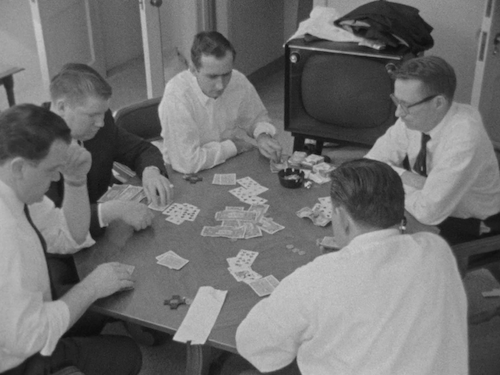