In Search of Dracula

Other // Unrated // May 26, 2020
List Price: $24.95 [Buy now and save at Amazon]
Review by Stuart Galbraith IV | posted May 14, 2020 | E-mail the Author
In Search of Dracula (1975) is a pretty junky movie, made much worse by what appears to have been American distributor meddling. The movie originated as a Swedish-West German-French co-production directed by Swede Calvin James. The Internet Movie Database credits Swedish actor Tor Isedal as narrator but the American release is hosted by British actor Christopher Lee, who also appears in the film, both as Dracula and his real-life historical counterpart, Vlad the Impaler. Al Adamson's Independent-International handled the U.S. release, and that's the version Kino's new Blu-ray sources. It's not clear how much of the original production was altered for Adamson's version, but his name is in the opening credits as a consultant, and it includes footage from his terrible Dracula vs. Frankenstein (1971). 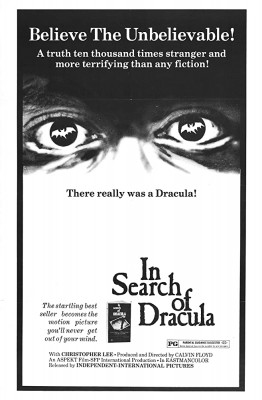 Filmed in the style of other ‘70s speculative documentaries like Chariots of the Gods? (1970) and In Search of Noah's Ark (1976), In Search of Dracula is both shamefully padded and meandering, tracing the influences of Bram Stoker's 1897 Gothic horror novel Dracula to the Carpathian Mountains of Romania and notorious 15th century ruler Vlad III Dracula, who famously impaled perhaps thousands of enemies, often on a whim.

British actor Christopher Lee, who played Dracula in Hammer's film series and variations of the character in other pictures, mostly European continent in origin, portentously narrates as well as appears as both Vlad (with graying hair and handlebar mustache and as Dracula himself, though most of that is (uncredited) footage from one of the weakest Hammer entries, Scars of Dracula (1970). New scenes are intercut with footage from that film, including uncredited members of that film's cast, as well as James Bernard's music, resulting in much confusion.

Adding to the picture's schizophrenic nature is a long digression about the creation of Mary Shelley's novel Frankenstein, and film clips, stills and photos from other purported "Dracula" movies that, in fact, don't even feature vampires, let alone Dracula. (Included among the "Dracula" movies: Fritz Lang's M!) Despite the scads of Scars scenes, apparently, they couldn't license footage from the Bela Lugosi Dracula (1931), so instead In Search of Dracula uses long clips from an earlier, non-horror and silent Lugosi film.

Jonathan Rigby's book Christopher Lee: The Authorized Screen History identifies In Search of Dracula as a 1971 production, made for television and running a bit over 70 minutes, with Lee returning for additional narration in 1974 to pad the film to its current length.


Still, In Search of Dracula is not without interest. The filmmakers went to rural Romania, which in the mid-1970s certainly seemed largely untouched by the Space Age, looking much like it probably did hundreds of years ago. Though Stoker never set foot in Romania before penning his classic novel, the locations match his descriptions uncannily well, and are the best thing about the movie. Have these simple, colorfully-dressed peasants since adapted to high-speed Internet and Netflix in the decades since? I wonder.

But the movie is still a big mess, and the curiosity horror fans might feel wanting to see Christopher Lee as Dracula one more time wears off fast, as the new scenes are staged with little imagination and enthusiasm. The picture sort of plays like a greatly extended episode of the Leonard Nimoy syndicated series In search of…, greatly padded to even its modest 82-minute running time.

Touting a brand-new 2K master, albeit of the Al Adamson version, In Search of Dracula looks good for what it is, with excellent detail and color, though presented in 1.37:1 standard frame format. Given its use of silent footage, and its European origins, where for all I know it may have been intended for television there, or maybe 1.37:1 projection in what surely must have been a limited release, this is no great loss. The DTS-HD Master Audio (mono) is acceptable, and optional English subtitles are offered on this Region "A" encoded disc.

The lone supplement is an audio commentary by Aussie film historians Lee Gambin and John Harrison. It's of a type that one might call a "viewing party" commentary, the kind of thing lonely Blu-ray buyers resort to in times of isolated desperation. Serious original research might have made sense of this hodgepodge, but Gambin and Harrison are content to chat aimlessly and unenlighteningly as things spill out onscreen.

In Search of Dracula defines specialty title, an outré oddity that only die-hard horror and/or Christopher Lee-Dracula fans will want to suffer through. It's not exactly terrible but it can't hold the viewer's interest and is only fitfully interesting. Rent It.