Night My Number Came Up, The

Kino // Unrated // May 19, 2020
List Price: $24.95 [Buy now and save at Amazon]
Review by Stuart Galbraith IV | posted May 19, 2020 | E-mail the Author
Produced by Britain's Ealing Studios, The Night My Number Came Up (1955) is a supernatural thriller not nearly as well-remembered as it should be. Tense and intelligent, its story revolves around the premonition (in the form of a dream) of a plane crash, putting it in a kind of club of ‘50s airplane-in-distress films that include No Highway in the Sky (1951), The High and the Mighty (1954), Zero Hour! (1957), and Crash Landing (1958), all good-to-excellent. The movie plays like a particularly fine, extended episode of TV's One Step Beyond.

Licensed from StudioCanal, The Night My Number Came Up boasts an excellent transfer, though it's incorrectly presented in 1.37:1 standard format, rather than its proper 1.66:1 widescreen. More about this below. 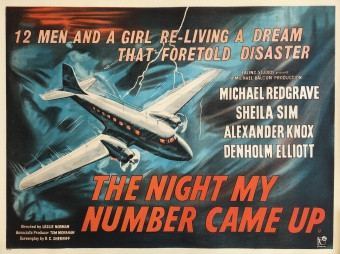 In Hong Kong, Navy Commander Lindsay (Michael Horden) urges the region's Wing Commander (Hugh Moxey) to search for a missing RAF transport airplane off mainland Japan's northeast coast, near Sado Island, far from where it is presumed to have gone down. The Wing Commander is initially skeptical of Lindsay's pleas, but Lindsay knows details about the flight kept secret, though he declines to reveal just why he's so certain the plane has crashed where he believes it has.

In flashbacks the story unfolds. After catching an airplane ride back to Hong Kong with diplomat Owen Robertson (Alexander Knox) and Air Marshal Hardie (Michael Redgrave), Lindsay is invited to a dinner party at Robertson's home, along with Hardie's personal assistant, Fl. Lt. McKenzie (Denholm Elliott).

After dinner, Lindsay is pressed to discuss a strange dream he had the night before, in which Hardie, Robertson, McKenzie and ten others - eight passengers and five crew members - including a last-minute VIP, a beautiful woman, and coarse, loudmouthed man, are aboard the plane when it runs into a dangerous storm of mist and ice, forcing it down along a rocky coastline with a lighthouse and small fishing village. Other details are described, including how, at one point, one of the passengers loses his nerve and has to be restrained. Though vividly recounted, the party guests aren't too worried, as the details don't quite match up with their flight plan to Tokyo the following morning.

However, before turning in, Robertson and Hardie receive a phone call from the Hong Kong Governor (Alan Webb) requesting Hardie allow transport of Lord Wainwright (Ralph Truman), en route to a trade conference, along with his pretty stenographer, Mary Campbell (Shelia Sim, later Lady [Richard] Attenborough). Moments before the flight is due to takeoff, two soldiers (Bill Kerr and Alfie Bass) returning to Okinawa hitch a ride, bringing the manifest to that unlucky thirteen.

The Night My Number Came Up boasts an excellent screenplay, and equally good production values. R.C. Sherriff (Journey's End) script provides just enough background on the characters to make each distinctive in their varying reactions to Lindsay's premonition. Initially, the slightly cocky McKenzie mercilessly teases Robertson suppressed panic, but the audience learns that he'd been an ace pilot during the Battle of Britain who'd suffered a nervous breakdown, making them wonder if perhaps he'll be the one who'll crack.

A second-unit crew shot footage of a real plane flying over Asia, with some footage taken at Kai Tak Airport in Hong Kong. This is expertly integrated with British soundstage material, while the plane in flight and the crash (first shown when Lindsay discusses his dream) are very imaginatively staged using fairly good miniatures.

The cast sells the material, especially Hordern, Redgrave, Knox, Elliott, and, as the pilot, Nigel Stock.

There's a scene in The Poseidon Adventure where the protagonists have to hold their breath for about 90 critical seconds. Invariably, because the film is so effective, movie audiences vicariously experiencing their trials, likewise hold their breath, too. The Night My Number Came Up works in a similar manner. In scenes where air pressure causes their ears to pop and the cabin air gets dangerously thin, I found myself empathically emulating their swallowing and breathing actions also. This is one effective movie.

Filmed in black-and-white, Kino's Blu-ray of The Night My Number Came Up boasts an excellent transfer that is free of age-related damage, has excellent detail and rich blacks, though the aspect ratio is clearly wrong. The title blocking and framing of the action indicate cropped widescreen, most likely 1.66:1. It's not ruinous but empty space above the actors' heads (among other things) works against the claustrophobic look director Leslie Norman is obviously aiming for. The DTS-HD Master Audio (mono) is fine, supported by optional English subtitles. Region "A" encoded.

Supplements include a trailer and an above-average audio commentary by film historian Samm Deighan.

I'd only vaguely heard of The Night My Number Came Up, but it turned out to be a real find, a nail-biter of a thriller with supernatural elements. Highly Recommended.