Kino // Unrated // May 5, 2020
List Price: $29.95 [Buy now and save at Amazon]
Review by Stuart Galbraith IV | posted May 20, 2020 | E-mail the Author
Though a bit stagey and reliant on a series of coincidences that strain believability, the first film of J.B. Priestley's play An Inspector Calls (1954) is, otherwise, really marvelous, a gripping drawing room mystery (with a supernatural element) that's also almost shockingly frank in its politics, a scathing condemnation of British capitalism and its Edwardian class system. Alastair Sim stars, delivering another superb performance. 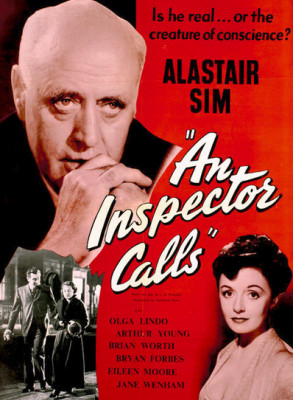 Set in 1912, the opening minutes deceptively appear quite conventional. At the upper-class Birling family home, a celebration in underway for the engagement of Sheila (Eileen Moore) to Gerald Croft (Brian Worth). Patriarch Arthur Birling (Arthur Young), a prominent factory owner and politician, and his matronly wife, Sybil (Olga Lindo) are pleased with the arrangement, as Gerald comes from an even more prominent family. Arthur assures the young man that he'll rise to the occasion, anticipating that he'll make the year's Honours List, perhaps even a knighthood. Only Shelia's brother, Eric (Bryan Forbes), puts a damper on the occasion, he teasing her and obviously drinking in excess.

Abruptly local police Inspector Poole (Alastair Sim) appears, apparently entering the dining room through French windows rather than the front door and being properly announced. He explains he's investigating the death of a destitute young woman named Eva Smith (Jane Wenham, in flashbacks), who died in infirmary after ingesting a disinfectant. (At this point readers unfamiliar with the story might want to seek out the Blu-ray. It's definitely a film best experienced cold.)

"What's this got to do with us?" everyone asks, until Arthur finally remembers that Eva had been employed at his factory. She was an excellent worker, he admits, but dismissed her some months back after she joined with several other women demanding a living wage and threatening to strike.

After being shown her photograph, Shelia, too remembers an encounter with Eva, who next went to work at a hat shop frequented by Shelia and her mother. There, annoyed by her mother's controlling manner, she projected her anger on pretty sales girl Eva over an imagined slight, and forces the management there to have her sacked.

Priestley, a socialist, first saw his play performed in the Soviet Union in 1945, then it became a critical and commercial smash in London the following year, with Ralph Richardson as the Inspector, Harry Andrews as Gerald, Margaret Leighton as Shelia, and Alec Guinness as Eric. It eventually became one of Priestley's best-known works, with revivals and television adaptations regularly produced. The play's political relevance has kept it timely through the decades, distinguishing it from more dated drawing room drama.

(Spoilers) For the movie, British censors tempered its frankness only slightly; explicit material becomes implicit, and not lost on the movie audience. Gerald keeps and sleeps with the desperate Eva, and later she becomes pregnant out of wedlock with rakish Eric, for instance. The play never showed Eva Smith, while the movie, obviously in wanting to "open up" the material and take it outside the Birling home, does so intelligently, and Wenham, later married to much younger actor Albert Finney, is very good in the part.

In each of Eva's encounters with a member of the Birling family, their selfish whims and arrogance eat away at her determination to better herself and, eventually, to simply survive Britain's unforgiving class system. Upon reflection, Shelia and Gerald accept responsibility for their actions, transformed by the Inspector's visit, while Shelia's parents stubbornly, at one point almost gleefully, self-righteously wash their hands of Eva's sad fate. Priestley's play expertly captures their frequent hypocrisy: matriarch Birling's judgmental management of a women's charity, haughtily refusing to come to Eva's rescue, and her condemnation of the man who impregnated her -- until she realizes that the father is her own son; Mr. Birling's insistence that he's paying women "the going rate" which, nevertheless, isn't enough for these workers to live on, while he and his family enjoy ostentatious living.

Directed by Guy Hamilton, An Inspector Calls features fine acting across the board, particularly by Alastair Sim, always at his best playing ambiguous characters that observe the reactions of others as much as speak for himself.

Licensed from StudioCanal, who provided their 2014 restoration, Kino's Blu-ray of An Inspector Calls looks good in its black-and-white, 1.37:1 standard ration presentation. Though released in March 1954, well into the widescreen revolution of the 1950s, it appears to have been shot for standard framing, quite possible as it was likely filmed during the fall of 1953, and doesn't have the roomy framing of the obviously incorrect The Night My Number Came Up. The image isn't quite as sharp or rich as that transfer, but generally quite good throughout. Some presumably damaged frames appear to have been digitally repaired. The DTS-HD Master Audio (mono) is fine, supported by optional English subtitles. Region "A" encoded.

Supplements include a repurposed video interview with actress Wenham (who died in 2018 at 90), a new audio commentary by David Del Valle, and trailers from other (and lesser) Guy Hamilton films.

A terrific, even revelatory film, An Inspector Calls is Highly Recommended.