Kl Studio Classics // G // April 28, 2020
List Price: $20.49 [Buy now and save at Amazon]
Review by Stuart Galbraith IV | posted June 1, 2020 | E-mail the Author
Though adapted from Woody Allen's successful 1966 same-named Broadway play, the 1969 film of Don't Drink the Water has fallen into deserved obscurity. Allen's involvement in the project was minimal at best, though his agents Jack Rollins and Charles H. Joffee produced, with Allen reportedly hating the results, even remaking it himself in 1994 in a rare foray into filmed television. Directed by Howard Morris and starring Jackie Gleason, the '69 adaptation is, seen today, nearly unwatchable. On one hand, it would be unfair to compare it Allen's movies, even the "early, funny ones," because Allen himself was only just then starting to write and direct his own films, with Take the Money and Run apparently shot and released almost simultaneously. While funny, that picture is hardly representative of Allen's subsequent work, either. Mainly, what's wrong with this Don't Drink is that no one connected with its making seem to understand the basic foundation of its humor, and so muddied the waters with all manner of style and schtick, like the scattering blast of a shotgun. Further, Gleason (among others) is miscast, and genuinely odd production decisions make things worse. 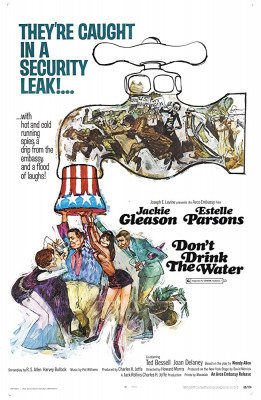 As in the play, New Jersey caterer Walter Hollander (Gleason) embarks upon a European vacation with his wife, Marion (Estelle Parsons), and teenage daughter, Susan (Joan Delaney). However, their plane is hijacked to Vulgaria, an Eastern Bloc country behind the Iron Curtain, and the family unwisely deplanes long enough for the secret police, led by Krojack (Michael Constantine), to accuse Walter of being a spy.

Threatened with arrest, with dozens of machine guns pointing in their direction, they flee to the car of American Ambassador Magee (Howard St. John). He's out of town, however, having left his inept son, Axel (Ted Bessell), in charge. The Hollanders find refuge at the American embassy, but are also indefinitely stuck there, Krojack determined to have Walter arrested the moment he steps off U.S. soil.

I've never seen the play, but Allen's original conceit seems to have been the contrast of Cold War political stubbornness contrasting this ordinary, blithely apolitical (and/or politically naïve) family caught in the middle of an international incident. They're more concerned about getting their interrupted vacation back on track than contrite about the horrible political mess they've made.

On the Broadway stage, it's easy to see how Allen's play might have been quite funny, sophisticated New York audiences laughing at these clueless, uncultured middle-class boobs. In defense of the film, it's difficult to determine how one might make this same material work in movie form. Regardless, the decision the filmmakers do make throughout are mostly very bad ones.

For starters, to accommodate star Jackie Gleason, interiors were filmed at a studio in his beloved Miami, where Gleason had based his weekly variety series for the past five or so years. Except for the exceptionally garish and cheap-looking art direction of the embassy interiors, possibly not the Miami studio's fault, that didn't hurt things too much, but for unaccountable reasons it was decided to shoot all the exterior Vulgaria scenes in Old Quebec, Canada. The classical, Medieval, and Châteauesque architecture is so far afield of the required threatening, oppressive Eastern Europe look these scenes play almost surreal.

Howard Morris's direction is singularly peculiar, often calling attention to itself. Inexplicably, he often uses extreme close-ups of Gleason's bulging eyeballs, and sometimes tight close-ups looking into his mouth. There are also too-close framings of other cast members. Though Morris was an almost insanely funny comic actor (on Your Shows of Shows especially, but also The Andy Griffith Show and in voice work), his background as a director was mostly TV sitcoms, his feature credits up to this point limited to Who's Minding the Mind? (1967) and With Six You Get Eggroll (1968), neither particularly good but better than this. Mostly his direction is at a sitcom level, though at other times he seems to have been partly inspired by the frenetic style of director Richard Lester, with lots of fast cutting, hard to pull off in a movie where everyone spends nearly the entire story stuck in one place.

Throughout, I found myself comparing this to the hilarious comedy The In-Laws (1978), which is similarly structured and shares plot elements, to the point of actor Richard Libertini playing similarly eccentric foreigners in both pictures: an exiled Catholic priest and amateur magician here, an insane despot of a Latin country in In-Laws. A big part of the reason that the latter picture works so well is Alan Arkin's performance, and his everyman character's reactions (bemusement, disbelief, a growing sense of panic) to the increasingly bizarre and dangerous events swirling around him, events he's helpless to stop.

For Don't Drink, Gleason merely falls back on one of his stock characterizations, really a slight variation of Ralph Kramden. As Walter, Gleason is irritable throughout, and bugs his eyes out and mugs when he's in danger like his Honeymooners character, but without Ralph's compensating love for Alice and sincere desire to make her happy. Here, Estelle Parsons's Alice equivalent is merely along for the ride.

Gleason's broad performance, the ugly art direction, the weird use of Canadian locales, the self-consciously "funny" musical underscoring, and Morris's everything-but-the-kitchen-sink direction, for all its misplaced energy, generates few laughs. Libertini is reasonably funny, and Constantine gets into the spirit of things, but mostly Don't Drink the Water just sits there.

Presented in 1080p 1.85:1 widescreen, Don't Drink the Water at least looks good throughout, accurately rendering good resolution, color, and contrast. The DTS-HD Master Audio (mono) soundtrack is also fine, and optional English subtitles are provided for this Region "A" disc.

Supplements are limited to a new audio commentary track by film historians Howard S. Berger and Nathaniel Thompson. They gamely defend the film as a harmless fun of its era, but they also run out of steam quickly veering off-topic and with a lot of halting "I mean, you knows."

Woody Allen completists will want to see this, but it's dated, labored, and pretty dire overall. Rent It.