VCI // Unrated // April 14, 2020 // Region 0
List Price: $29.95 [Buy now and save at Amazon]
Review by Stuart Galbraith IV | posted June 1, 2020 | E-mail the Author
Part of label VCI's ambitious plan to release newly-remastered Blu-ray editions of classic Universal serials, Jungle Queen (1945) doesn't rate very high among serial enthusiasts but I found its simple charms reasonably satisfying. As with other Universal serials of this period, it's overpopulated with characters, confusing at times, and oddly put together, this like several others ditching the usual recap normally found at the beginning of each chapter.

Perversely, VCI's access to good film elements (mostly: see below) is subverted by remastering seemingly designed to make the image resemble smeary videotape. True blacks are non-existent. Everything is a gray, washed-out mess with no contrast. Flashes of fine detail can't compensate for the utter madness of the senseless, murky look the project supervisor settled (strived?) for. Nighttime scenes suffer badly in particular.

VCI has a reputation for gumming up their Blu-ray releases and, to a point, I've been more forgiving than others. But, in this case, it's mindbogglingly counterproductive to have the raw elements capable of producing a definitive high-def release, yet to go to some considerable lengths to give it the look it does. 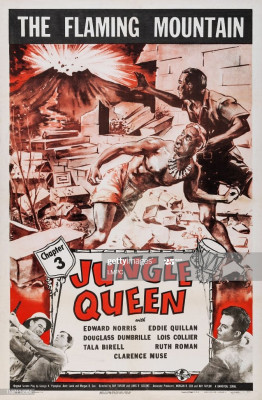 The thirteen-chapter serial, released in the last year of the war, is set just before it, in 1939, where Nazi Germany plots to gain control of British Middle Africa. To this end the Germans, led by Lang (Douglass Dumbrille) and Dr. Elsie Bork (Tala Birell), posing as scientists, have found an ally in Maati (Napoleon Simpson), an ambitious Tongu native hoping to usurp the high priest throne from heir-apparent Kyba (Clarence Muse), Maati promising to help them revolt against British forces.

Into the fray steps Pam Courtney (Lois Collier), the niece of explorer Alan Courtney (Irwin Boyd), who possesses valuable information about, well, something or other, but is assassinated just as Pam locates him. American volunteer Bob Elliot (Edward Norris) and sidekick Chuck Kelly (Eddie Quillan), after initially thinking Pam might be an enemy agent, come to her rescue. Then there is the Lothel (Ruth Roman), ethereal Queen of the Jungle herself. A glamourous Hollywood starlet-type white woman, she has great influence over the Tongili, passing through flames unscorched and frequently popping in on native powwows through a big stone door, offering advice with her disembodied voice. One almost expects her to add, "And pick up a pound of butter and some eggs while you're at it" before vanishing back into the flames. Minus the disembodied voice she also appears in the jungle brush long enough to help out our heroes, always disappearing again the moment they turn their heads.

The two leads, Edward Norris and Lois Collier, are competent but unmemorable. A Robert Montgomery type, Norris was busy in films from the early ‘30s through the mid-1950s, but his leading man shots were well past by 1945. Later active in television, he died in 2002 at 91. Collier was most active in B-Westerns, particularly their "Three Mesquiteers" series in its later days. She's also the female lead in Flying Disc Man from Mars (1950). Prolific Eddie Quillan comes off better as the loyal, wise-cracking sidekick.

Douglass Dumbrille specialized playing oily attorneys, corrupt politicians and the like in A-pictures, so it's a little disheartening to see him reduced to appearing in a lowly serial, and not even as the main villain, as Tala Birell's Leni Riefenstahl-like Elsie Bork has that title. Born in Romania and raised in Vienna, she doubled for Marlene Dietrich in some German films before moving to England and then the U.S. to appear in the German-language versions of several early talkies. She alternated between big movies like Bringing Up Baby and Song of Love and B-mysteries like Philo Vance's Secret Mission and The Power of the Whistler.

I'd known Ruth Roman primarily for Champion (1949) and Hitchcock's Strangers on a Train (1951), and for her later work on TV, so seeing her in this is akin to Ava Gardner turning up in an East Side Kids movie. The part is undemanding, but she's certainly glamorous enough. Like Dumbrille, it's a bit weird seeing actor Clarence Muse as an African native in a serial, he being among the few African-American actors of this period who nearly always avoided stereotyped parts, though he carries it with his usual dignity and good acting.

A mystery nagging this reviewer throughout Jungle Queen is another native character, Orbon, billed as "Jim Basquette" in the credits. Neither Wikipedia nor the IMDb pick this up, but I'd wager dollars to donuts that the actor in question is really James Baskett, best remembered as Uncle Remus in Disney's senselessly controversial Song of the South (1946). Partly because in "real life" Baskett/Basquette looked nothing like his Uncle Remus character, I had difficulty spotting him in Jungle Queen but I'd wager that's him.

In its original 1.37:1 black-and-white form, Lost City of the Jungle looks sharp but otherwise is a mess contrast-wise described in more detail above. Chapter five is preceded by a title card noting that the disc's producers were unable to locate elements for the first (of two) reels, and had to resort to a VHS (!) source. "It is what it is," concludes the odd note of surrender. The PCM mono is acceptable. Optional English subtitles are provided on this region-free disc.

An enjoyable jungle serial, for fans it comes Highly Recommended.