Kl Studio Classics // Unrated // April 28, 2020
List Price: $22.49 [Buy now and save at Amazon]
Review by Stuart Galbraith IV | posted June 4, 2020 | E-mail the Author
In lesser hands, The Sound Barrier (1952) might have been trite melodrama, a dated picture about civilian aircraft designers and test pilots pushing postwar technology toward unknowable limits now commonplace. But director David Lean was no ordinary filmmaker, and dramatist Terrence Rattigan's script no ordinary screenplay. It works, and still holds up marvelously well today, because it moves in unexpected directions, with unanticipated emphases. Though it contains elements clearly influential on other later, including Philip Kaufman's stupendous The Right Stuff (1983), the focus of The Sound Barrier is as much a nebulous barrier of another kind, the relationship between an adult daughter and her emotionally aloof father. 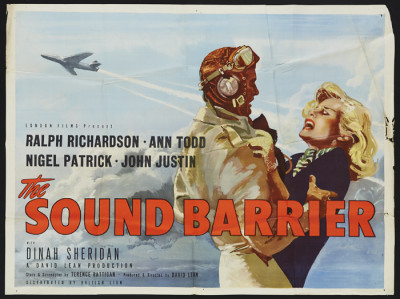 The story begins near the end of the Second World War, when self-made millionaire aircraft magnate (and early pilot) John Ridgefield (Ralph Richardson) overseas his company's development of game-changing jet engines and aircraft. Into this environment daughter Susan (Ann Todd, then married to Lean) returns home newly-married to fighter pilot Tony Garthwaite (Nigel Patrick). Impressed by his flying credentials, Ridgefield not only welcomes Tony into the family but offers him a job as a test pilot once the war is over.

However, this puts additional pressure on Ridgefield's son, Christopher (Denholm Elliott), who feels enormous pressure to follow in his esteemed father's footsteps and fly himself. Though aware he hasn't got the knack, he undergoes training for his first solo flight, only to die in a fiery crash.

After the war, Garthwaite joins Ridgefield's company, the Old Man eager to develop aircraft capable of exceeding the speed of sound. Susan, by this time pregnant with child, is increasingly distressed by her husband's dangerous test flights, despite the comfort of friends Jess (Dinah Sheridan) and Philip Peel (John Justin), he another pilot and old friend of Tony's.

Hollywood aviation films of the period like Strategic Air Command (1955) tended to dish out equal portions of gee-whiz technology with big dollops of Cold War propaganda. What impresses about The Sound Barrier is that for all its impressive hardware and aerial footage, the film is really quite an intimate, personal story about the strained relationship between a woman and her father, a reserved man she can't understand, who seems so obsessed with breaking the sound barrier that even the lives of loved ones is a small price to pay.

Lean resisted using Richardson, an actor he always found dull onscreen, a position he reversed during the making of Sound Barrier. Adopting a thick Northern accent (apparently to emphasize his self-made man status), Richardson is mesmerizing, particularly late in the film when his true character is peeled away like an onion.

(Spoilers) Estranged from his daughter and grandson, he asks Susan to come see him, and as he monitors ground-to-air talk of a particularly dangerous test flight, Ridgefield drones on asking about her plans for his grandson's schooling. Schooling? Why discuss it now? Like so much British drama (The Remains of the Day being one obvious example), it's all about reading between the lines. The father, who always seemed so cold-blooded and uncaring is terrified about the danger he's putting his test pilot through, and can't bear to suffer through that flight alone. Susan at first is bemused, finding her father's questions oddly inappropriate, to the point where he finally has to blurt out that he doesn't want to be left alone. Not now. Suddenly, she gets it. He's not the uncaring father she'd for years assumed he was, but in fact had been suffering in silence and tremendous solitude all along. It's a very moving scene, and hardly what one might have expected in what's regarded as a "semi-documentary" about jet aircraft.

Much of the picture works a similar magic. Like The Right Stuff, the realism of the full-size aircraft and stunning aerial photography (no models) is integrated with more impressionistic material capturing the ethereal appeal of reaching for the stars. The final scenes, in the father's observatory, with its big telescope and stars in the night sky recalls producer Alexander Korda's Things to Come (1936) as much as a David Lean film.

Lean was disappointed that Nigel Patrick's performance didn't quite convey the aura of the test pilots he met, and while that's true he's excellent in all his scenes with Richardson, Patrick's outsider character becoming a kind of surrogate for the audience. John Justin, best remembered as the star of The Thief of Bagdad (1940) captures the test pilot character better, especially in one unexpected moment near the end.

Though heavily fictionalized - British pilots weren't, in fact, first to break the sound barrier, nor did their efforts lead to a domination of the commercial jet industry - the aircraft shown is fascinating from a historical perspective, and the screenplay and Lean's direction always makes the technology and theoretical problems the characters face easy to follow at all times. Lean also shoots the flying scenes in interesting ways: suggesting their power through the rustling of fields blown by their exhaust, in some scenes sticking to audio from the pilot's radio rather than ordinary shots of the jet in flight, etc. He varies what the audience sees of these repeated test flights so that they're never dull.

Presented in 1080p 1.37:1 standard frame and in black-and-white, Kino's The Sound Barrier is derived from a 2018 BFI restoration of the original British version, not the shortened American release, Breaking the Sound Barrier. Except for a single shot the film shows no perceptible signs of damage or age-related wear; blacks are inky and contrast is excellent, as is the impressively sharp resolution. The DTS-HD Master Audio (mono) soundtrack is also fine, and optional English subtitles are provided for this Region "A" disc.

Supplements include a new audio commentary by film historian Peter Tonguette, and a BFI Archival Interview with Lean, undated but presumably from the late-1960s or early ‘70s. The brief interview is okay but not especially enlightening. The commentary offers some good information, occasionally veering a bit far off-track but, overall, it's okay.

One of director David Lean's most underrated films, The Sound Barrier is a must-see. A DVD Talk Collector Series title.