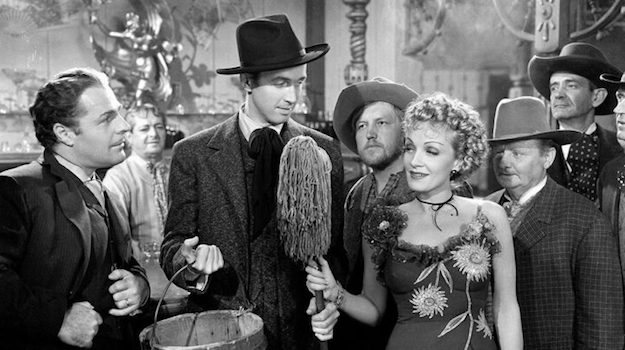 NOTE: The accompanying images are promotional stills and do not represent the quality of the Blu-ray being reviewed.

Although the original film is mostly forgotten at this point, the classic 1939 comic western Destry Rides Again was a remake of a 1932 (!!) star vehicle for Tom Mix. The first Destry Rides Again reportedly hews at least somewhat close to Max Brand's same-named source novel, but the better-known remake retains only the title.

Producer Joe Pasternak originally conceived his '39 Destry as a pacifist parody of the square-jawed Tom Mix-style cowboy hero, with Gary Cooper's jaws slotted for the lead role. When Cooper passed, they decided to go totally against type and cast up-and-coming everyman James Stewart as their lead. Marlene Dietrich, who then had been starring in films that would cement her screen goddess status but weren't selling tickets, was offered a comeback role as a down-to-earth saloon singer and love interest/foil for Stewart.

This odd-couple pairing is part of the unusual lightning-in-a-bottle genius of Destry Rides Again. It's a pretty simple and not-unfamiliar story about a rowdy Western town brought to law and order, but it's chock full of offbeat choices that make the flick sharper, richer, and (oh yeah) funnier than any run-of-the-mill oater has any right to be.

First off, there's James Stewart as Tom Destry, Jr., the son of a legendary lawman who nonetheless wound up shot in the back. Tom took a lesson from this, deciding to stay away from guns and putting his brain to use instead. This choice horrifies his would-be allies -- such as Washington Dimsdale (Charles Winniger), the outmatched sheriff of Bottleneck who hires Tom as his deputy -- and delights his potential enemies. When Tom first arrives in Bottleneck off a coach, he is mocked by the local gamblers for holding the parasol and birdcage of a fellow lady passenger as she exits. Local kingpin Kent (Brian Donlevy) doubles over with laughter when learns he won't have to disarm the new deputy, since he has no firearms to begin with.

But, Tom's secret weapon -- besides his superior smarts -- is the subtle toughness that lurks under his low-key affability. It's Stewart's secret weapon, too. He would eventually explore his dark side after WWII (in absolutely masterful westerns like Winchester '73 and The Man from Laramie), but here he quietly lets it inform his character's folksiness. The most obvious moment where Stewart lets Tom's secret darkness peek out is when he asks to borrow a troublemaker's gun and then proceeds to effortlessly shoot the ornaments off a sign across the street. Stewart calmly sends the message that he's far from a milquetoast pantywaist, and the message is received loud and clear -- by the characters and the audience. Tom's talent for gunfighting makes his decision to stay away from it all the more intriguing. 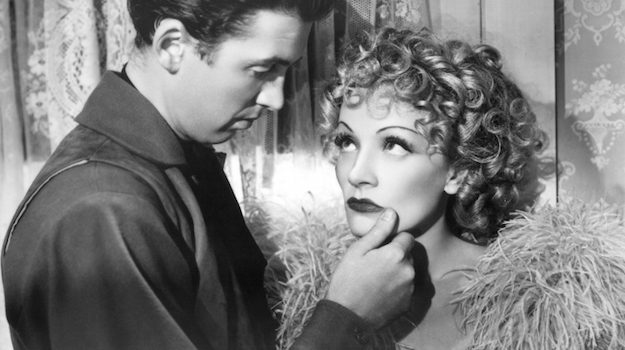 Similarly intriguing is Marlene Dietrich as showgirl Frenchy. As the saying goes, "How'd a gal like you end up in a place like this?" The mismatch of Old World cabaret glamor with the rootin' tootin' West is so unusual and memorable that Mel Brooks thought it was worth referencing in Blazing Saddles (with Madeline Kahn as the Dietrich stand-in Lili Von Shtupp). But Dietrich is more than stunt-casting, and she's more than game, peppering her rousing musical performances with self-conscious "yahoo!"s. Her Frenchy is the queen of Bottleneck, thanks to partnering up with the crooked Kent. But there's a sensitive woman under the Teutonic bluster, and Tom spots it easily. "I bet you got kind of a lovely face under all that paint," he tells her. "Why don't you wipe it off some day and have a good look?"

It's interesting to note, having also just reviewed Dietrich in The Song of Songs (1933), that she is arguably more effective in this role, where she lets her icy persona melt over the course of the film, than in that earlier performance, where she did the opposite and built it up.

The film is filled out with a great ensemble of character actors, starting with Donlevy as the sharp-dressed baddie. Winniger's utterly delightful town-drunk-turned-sheriff also suggests another possible precursor to Blazing Saddles, considering the backstory of Gene Wilder's Waco Kid. Mischa Auer is charming as the dopey second husband of the local hotel owner, Mrs. Callahan; he is forced to take on the name of his precursor, "Callahan," despite being a Russian immigrant. Una Merkel is his henpecking wife, who gets into a knockdown barroom catfight with Frenchy -- probably the film's most famous sequence -- after Frenchy wins Callahan's trousers in a card game.

Director George Marshall keeps everything moving fluidly.* There's not a dull moment in the flick. Story-wise, there's one disappointing development: in the climax, Destry is eventually goaded into grabbing his guns and settling things with bullets. While one might argue that the big shoot-out showdown is too much of a staple of the genre for a mainstream flick to eschew it entirely, this development kind of kneecaps the integrity of the character. A close read might lead one to argue that, by the final scene, Destry has once again come to his senses, but it still plays as less than satisfying. Although, taken in context, it's a minor blot on an excellent film. 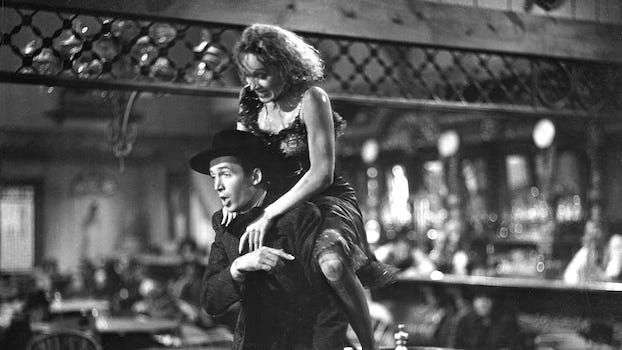 The Blu-ray
Destry Rides Again includes a fold-out insert with an essay by Farran Smith Nehme.

The Video:
Sourced from a new 4K restoration by Universal and The Film Foundation, this AVC-encoded 1080p 1.35:1 presentation is outstanding. Apart from a few optical transitions, this looks clean and clear -- with no distracting damage. As DVD Beaver noted in their side-by-side comparison, this transfer is a little darker and softer than the region-free German Blu-ray from 2014. In motion, the image doesn't look unduly scrubbed of grain or murky. It will probably boil down to a viewer's taste, and to this viewer, this transfer tastes A-OK.

The Audio:
The LPCM mono audio has also been cleanly remastered and restored. No distracting damage or surface noise. The singing performances and music sound great. I noticed in some of the crowd scenes that there was good mixing separation between the ambient chatter and the main dialogue and action, even with just the single channel. An English SDH option is provided.

(HD, 17:17) - A really well-delivered history lesson and analysis that delves into the pivotal role this film played in both Marlene Dietrich and James Stewart's careers, the subverted genre and gender expectations contained in it, plus the Middle European influence on the film.

Final Thoughts:
One of the best films in Stewart and Dietrich's respective careers, and a major treat to see them working together. Clever, funny, and delightfully offbeat. The new restoration looks and sounds excellent. The newly minted extras are well worth exploring. Altogether, it's a must-have. DVD Talk Collector Series. 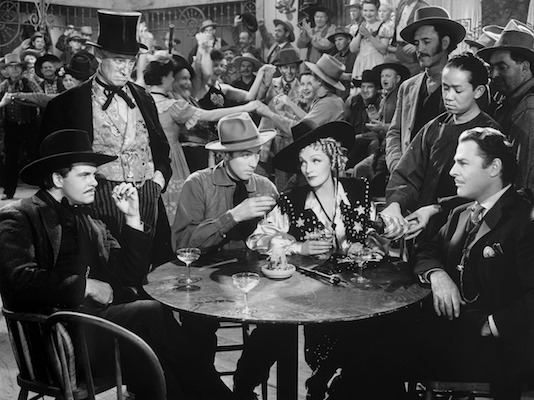