Film Noir: The Dark Side Of Cinema II (Thunder on the Hill / The Price of Fear / The Female Animal)

Kino // Unrated // May 12, 2020
List Price: $49.95 [Buy now and save at Amazon]
Review by Stuart Galbraith IV | posted June 16, 2020 | E-mail the Author
Film Noir: The Dark Side of Cinema II is a fun collection of three titles all centered around women played by leading ladies at or approaching the twilight of their starring careers: Thunder on the Hill (1951) with Claudette Colbert; The Price of Fear (1956) with Merle Oberon; and The Female Animal (1958) with Hedy Lamarr. 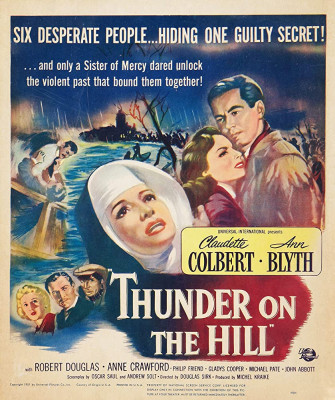 By far the best of the three pictures, Thunder on the Hill is a noir-flavored mystery-thriller, set at a convent-hospital in Norfolk, England. The solution to the mystery is pretty obvious early on, but Douglas Sirk's direction, particularly the way he uses the production's lavish but underemphasized sets, offset the problems with the script.

A torrential rainstorm and flood send evacuating villagers to the convent, its nuns overwhelmed with the displaced population. Among those temporarily cut off from the rest of the world is Valerie Cairns (Ann Blyth), en route to the death house after being convicted of the poisoning death of her bedridden, former classical pianist brother.

This delay in her execution only serves to make the bitter Valerie even more terrified and resentful. Sister Mary Bonaventure (Claudette Colbert), haunted by the suicide of her sister sometime earlier, tries to comfort Valerie, but it's no use. Soon, despite all the evidence pointing to Valerie's guilt, Sister Mary becomes convinced of her innocence, and agrees to find a way to bring her former fiancé, Sidney Kingham (Philip Friend), across the flood waters and back to the convent to see her.

With its $2.5 million budget, Thunder on the Hill was a major undertaking for Universal, then still primarily a maker of program pictures. The production design, credited to Bernard Herzbrun and Nathan Juran (the latter possibly promoted to director based on his work here) includes elaborate, finely detailed but not cavernous sets. Wisely, Sirk and cinematographer William H. Daniels instead emphasize its claustrophobic qualities, with characters crammed in narrow passageways, winding staircases and the like, and with 80% or more of the stories confined to the convent's interiors. One scene has Valerie playing one of her brother's compositions while Sister Mary discreetly listens, but almost invisible as Sirk places her on the other side of a corner office window.

Late in her starring career, Claudette Colbert is excellent throughout, surmounting a costume that largely confines her performance to her face alone. Michael Pate, as a half-witted handyman; John Abbott's eccentric pharmacist, and Gladys Cooper's Mother Superior also stand out, as does Hans J. Salter's moody score. 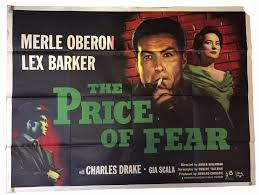 An entertaining but absurdly convoluted noir, its lively climax marred somewhat by obvious Production Code restrictions, The Price of Fear (1956) plays like it was written for an older female lead along the lines of Joan Crawford, but that the producers settled for Merle Oberon, cast against type. Both she and her co-star, Lex Barker, late of RKO's Tarzan film series, were not Universal contractees in the usual sense, adding to the picture's off-kilter feel.

The movie's premise is rooted in a series of outrageous coincidences. David Barret (Barker) is half-owner of a lucrative dog track, but as the film opens learns that his partner, Lou Belden (Tim Sullivan) has sold out his interests to gangster Frank Edare (Warren Stevens). Barrett confronts Edare at a nightclub, and threatens his weak-willed partner. Sensing an opportunity to get rid of Barrett, he orders henchman Vince Burton (Phillip Pine) to tail Barrett, while arranging to have Belden bumped off.

Elsewhere, respected single businesswoman Jessica Warren (Oberon), in a celebratory mood, is driving home drunk when she strikes an elderly pedestrian, critically injuring him. She flees the scene, then some distance away decides to report the accident to the police, calling them from a pay phone.

At that same moment, Barrett, trying to shake Edare's tail, has taxi driver McNab (Stafford Repp) to drop him off on the same dark, lonely street where Jessica is phoning the cops. Barrett sees her unattended car and drives off with it. Jessica, realizing that she can pin the hit-and-run on the apparent car thief, instead reports her car stolen. Meanwhile, Edare has Belden gunned down.

The following morning, Barrett finds himself under investigation for two crimes he didn't commit: Belden's murder, orchestrated by Edare, and Jessica's hit-and-run. Though the latter charge risks being bumped to manslaughter as the injured man clings to life, Barrett figures he's better off risking a prison sentence than the chair, and during questioning with Barrett's detective pal, Pete Carroll (Charles Drake) and attended by Jessica and the injured man's daughter, Nina (Gia Scala), Barrett doesn't exactly deny the hit-and-run. (That fact that Barrett did actually steal Jessica's car is immaterial, at least according to the screenwriters.)

Jessica, terrified of scandal and going to prison, goes along with the strange ruse as the plot gets even more Byzantine: Jessica and Barrett have a love affair, despite the unusual (to say the least) way they met, and Barrett also becomes friendly with Nina, even though for all she knows he's the man responsible for her father's critical injuries. Alcoholic McNab, Barrett's alibi, goes missing but his wife (Mary Field) accepts bribes from Jessica to keep her husband out of sight, just in case Barrett gets close to the truth about the accident. Edare, meanwhile, is understandably confused by all this, eventually realizing that to get rid of Barrett for good he'll have to get to him through Jessica.

Entertaining if ridiculous, the movie asks its audience to believe that these varied characters - ne'er-do-well but innocent Barrett, hit-and-runner Jessica, victim's daughter Nina, gangster Edare, malleable detective-pal Carroll - would hang out together in various combinations in the middle of two police investigations, with Edare and Jessica each trying to maneuver Barrett down a path of destruction.

Oberon's character and dialogue all play like the part, if not written expressly for Joan Crawford, certainly falls in line with the characters she often played. Eight years Barker's senior, no mention is made of their obvious age difference, and she's made glamorous throughout, even when scenes don't really call for that. If the part was offered to Crawford or other big names prior to Oberon, they were probably turned off by the character's weakness, a woman so terrified of prison that she'd do anything to avoid it. Oberon had been a huge British star of the 1930s, moving to Hollywood near the end of decade. She remained busy throughout the 1940s, though in increasingly lesser films. Her last big film roles were in Desiree, as Empress Josephine, and the MGM musical Deep in My Heart (both 1954). After The Price of Fear she worked sporadically, appearing in the all-star Hotel (1967) and the self-produced Interval (1973), her final film.

Actor-turned-director Abner Biberman does a competent, unexceptional job with the material, allowing himself a small role as well, as a pathologist. He directed a half-dozen movies in the mid-‘50s before turning to series television. (Spoilers) The climax, set aboard a train, is compromised by Production Code restrictions, and possibly even recut in postproduction, as the final version awkwardly edits a final shootout and suicide. 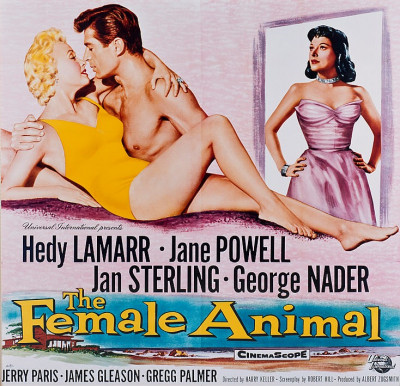 Trashy but entertaining, The Female Animal was the work of Albert Zugsmith, a tasteless producer who managed to attach his name to a few good movies, notably Sirk's Written on the Wind (1955), Jack Arnold's The Incredible Shrinking Man (1957), and Orson Welles's Touch of Evil (1958). The opening titles for The Female Animal are nakedly imitative of those in Written on the Wind, while the picture topped the double-bill whose second feature, incredibly, was Touch of Evil, far superior in every respect.

The movie is a warmed-over reworking of Billy Wilder's great Sunset Blvd. (1950), this time with Hedy Lamarr (in her last film role) playing Vanessa Windsor, the troubled, aging Hollywood star, and George Nader playing her "kept man," this time Chris Farley, an aspiring actor instead of an aspiring screenwriter. He, working as an extra, saves her from a falling studio light, and she ends up taking him to her Malibu hideaway, offering him a job looking after the place.

Later, at a diner, Chris rescues Penny (Jane Powell), a drunk and underage teenager from a man named "Piggy" (Gregg Palmer) about to molest her, Chris unaware that, in an incredible coincidence, she's Vanessa's adopted daughter. Penny, herself unaware of her mother's hideaway, falls for Chris. At the periphery of things is another faded actress, Lily Frayne (Jan Sterling), who also sets her sights on hunky Chris.

Needless to say, the picture does not compare favorably to Wilder's film, nor Welles's for that matter. Lamarr projects just the mix of gentle pushiness and anxiety in her seemingly sexless relationship with Chris, and Nader is pretty good as decent man adamant in his refusal to become her gigolo. At the time about fourth on Universal's leading man roster (after Rock Hudson, Tony Curtis, and Jeff Chandler, but way ahead of Rex Reason, John Agar and others), but was neither the chiseled-from-marble nor pretty-boy type Universal nurtured during the ‘50s. Nader always seemed more rooted in the real world, a more handsome Joseph Campanella-type.

Where the movie really goes off the rails is the wild miscasting of Jane Powell as a lusty, hard-drinking embittered teenager. To begin with she was nearly 30 when The Female Animal was made, and up to that point had exclusively appeared in musical comedy, almost all for MGM. In those films she was often charming, but here she's in way over her head. Her first ten minutes or so onscreen require her to be dead-drunk, but she's less convincing than a high school drama club tackling The Iceman Cometh.

Watching the film, I kept thinking how much better an actress like Gloria Talbott would have been. Talbott was only a couple years younger than Powell, but had convincing played a teenager in Sirk's All That Heaven Allows at Universal a couple years before, and this was the type of part in which she really excelled.

All three movies look great on Blu-ray. I'd seen Thunder on the Hill about 25 years ago, probably on VHS, and while I thought it okay then, those great sets and the richness of its black-and-white (and 1.37:1 standard ratio) really shine here. The Price of Fear is presented in its 2.00:1 widescreen, Universal's favored aspect ratio for cropped widescreen during the ‘50s, while The Female Animal is in black-and-white (2.35:1) CinemaScope. The DTS-HD Master Audio (mono) soundtrack on all three titles is fine, and optional English subtitles are provided for these Region "A" discs, one each per film.

Each film includes an original trailer, and The Female Animal comes with a new audio commentary by David Del Valle, gossipy but knowledgeable and informative.

More and more, Kino seems to be moving toward bundling more marginal titles together in loosely-themed packaging. This is, perhaps, a wise move and with standard discounts it means one can acquire titles like these for around $10 per movie. Highly Recommended.