When Lee died at just 32 in July 1973, he was fast becoming an international sensation. Yet only three starring movies were released when he was alive: The Big Boss (1971), Fists of Fury (1972), and Way of the Dragon (1973). The partly American-financed Enter the Dragon (also 1973), produced for about $850,000 yet grossed as much as $350 million worldwide, was released mere weeks after his death. Another Lee film, Game of Death, was partially shot in 1972 but put on hold when Enter the Dragon came along. That one was finished using just 11 minutes of Lee footage, the remainder awkwardly substituting doubles.

The movies made in the wake of Bruce Lee's death typically starred "Lee-alikes" given stage names to confuse audiences: Bruce Li, Bruce, Lai, Bruce Le, and Brute Lee among them. Some looked a bit like the real Bruce but had vastly inferior martial art skills; others were good Kung Fu fighters but looked nothing like Lee. The movies themselves were often crass and tasteless, often incorporating movie footage of Lee's funeral (sometimes with Lee in his coffin), or used footage from Lee's early years as a child actor, or outtakes from his starring films. 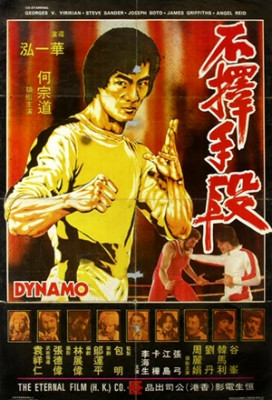 The student-teacher scenes are the best thing about Dynamo, with Feng Ku looking like a cross between Toshiro Mifune (same intense eyes) and Japanese comedian Hajime Hana (everything else). The relationship is not unlike Jackie Chan's with Siu Tin Yuen in Snake in the Eagle's Shadow (released a month before Dynamo) and Drunken Master (released after), but their similarities are probably coincidental.

Dynamo has the usual ragged charm of such pictures. One man notes, "A lot of people are cashing in on [Bruce Lee's] death," as the movie shows stock footage of Bruce Lee's funeral. The cheap film swipes music for more famous films, most obvious here a "Nobody Does It Better" riff from The Spy Who Loved Me. There's the requisite scene with the skanky foreign woman and hairy foreign assassin. The dubbing is atrocious and the final third of the picture, globe-hopping to places like Tokyo, Seoul, San Francisco, New York, and Chicago, offer ludicrous recreations of those places. One fight scene set at a Japanese temple litters the floor with dirty straw mats while the shoji screens and fusuma appear made from oven paper and scrap wood. A later scene set in the bowels of an underground parking garage in Chicago would have been more realistic had the filmmakers bothered to remove all the Hong Kong license plates on the cars.

Taiwanese actor Bruce Li (born Ho Chung-tao, in 1950) was maybe the best of the Lee imitators, Li striking the best balance between resembling Lee while having good Kung Fu skills and decent onscreen charisma beyond that superficial resemblance. Beyond the aforementioned Feng Ku, Mary Hon is appropriately grating as Miss Mary ("Where are you wanderin'?") The great action choreographer Woo-Ping Yuen adds a lot of energy to the fight scenes, which in the Bruceploitation films I've seen are often perfunctory at best.

Now the bad news. This is apparently the first of an intended series of martial arts releases from Pearl River, which is distributing its product through VCI. Packaging touts a "new 2K restoration of [an] original 35mm English print." Though HD transfers very rarely use 35mm theatrical prints, for a picture this obscure and of its type, the thought of scratches, splices, reel change cues and the like did not deter this reviewer. Indeed, it might even have added to its "grindhouse" atmosphere. What I didn't reckon is that during the transfer it appears some clean-up filtering programs were applied, perhaps to eliminate all the scratches, dust, etc., but in so doing they've rendered the image into headache-inducing softness. Some reels are worse than others, but virtually all detail has been scrubbed clean away. It's like watching a movie projected three notches out-of-focus, or maybe an upconverted laserdisc transfer. At 96 minutes the R-rated release is uncut and properly presented in its original 2.35:1 aspect ratio, and the disc is region-free, all for naught. Audio is LPCM 2.0 mono and limited to English and Spanish only; no Mandarin or Cantonese tracks. A region-free DVD version is also included.

Supplements include an enthusiastic and informative audio commentary by genre experts Michael Worth and Iain Lee; a 2K scan of a cut-down and rearranged 16mm (‘scope) version; a somewhat confusing featurette on the restoration and preservation of Kung Fu film elements; a featurette on cover artist Ian McEwan; a trailer and a nice booklet with an essay by Worth.

Much obvious effort, a labor of love, has gone into this release, and Dynamo is entertaining for what it is. It's really a shame the video transfer looks so awful, and therefore interested parties should check it out before committing to a purchase. Rent It.