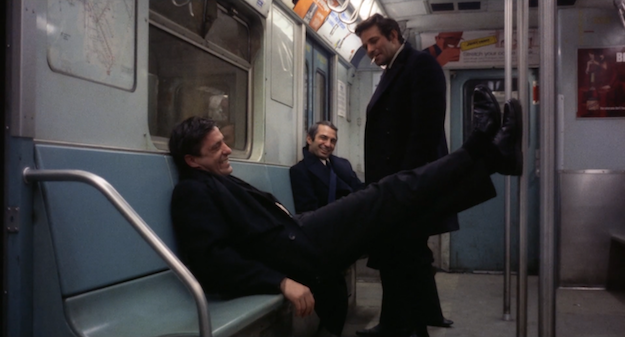 As a fan of John Cassavetes, it's fascinating to see the way his films provoke such polarizing and volatile reactions. Even for me: I find myself repulsed by moments I once loved, and I have become more accepting of films I once considered misfires (Gloria is an example of the latter).

There was definitely a time when Husbands (1970) was my favorite Cassavetes film. One of my strongest memories of going to a movie theater is from that time. I took a friend to a repertory screening of Husbands. I probably built it up in advance as one of my favorite films. When the final image cut to black, the audience shuffled out in a quiet murmur -- and all she could do was look at me askance. She was polite about it, but clearly her impression was that I was completely crazy to "love" such a long, intense ordeal, spent in the company of three central characters who are horrid men. Re-watching Husbands now, on Criterion's spiffy new Blu-ray, I am less in love -- although the film remains somewhere near the top of my personal ranking of Cassavetes's work (also in the neighborhood: Love Streams, A Woman Under the Influence, and the overdue-on-Blu Minnie and Moskowitz).

As a young man, I think I related to the film's characters, Harry (Ben Gazzara), Gus (Cassavetes), and Archie (Peter Falk), or, at least, I related to their need to break away from conventional living. I also felt a weird catharsis in the revelations of their inner darkness throughout the film. Now, as a (gulp) middle-aged man, roughly the same age as the characters, I don't find their bullying or childishness acceptable. I still recognize that some of the characters' toxic impulses probably lurk within me, but I just want these guys to get their act together and stop being such assholes.

That's the catch-22 of Husbands. What makes it extraordinary is also what makes it a potential chore to sit through. The film's plot can be synopsized in a snap: a trio of middle-aged men react to the death of their mutual best friend by getting good and drunk, eventually hopping a plane out of New York, to swinging London, in search of their lost vitality. But Husbands doesn't fit standard modes of film storytelling, and Cassavetes allows this simple tale to sprawl out over 142 minutes.

One of the film's key sequences -- and one which can effectively be used as a barometer as to whether or not Husbands is a film for you -- comes at the 18-minute mark. Already more than 24 hours into their post-funeral drunkenness, Harry, Gus, and Archie hold court at a long table in a bar, forcing the barflies seated at the table to take part in a singing contest. They are highly vocal in their pleasure or displeasure with the contestants; at one point, they harangue an older woman (Leola Harlow) for being too "cute" and phony in her performance. The singing contest scene is more than 20 minutes long -- longer than the whole preceding film up to this point. It is then followed by roughly 10 minutes of our three leads vomiting and arguing in the cramped bar bathroom. The duration is integral to the sequence's impact, but it's absolutely unsurprising that this section tries the patience of most viewers. 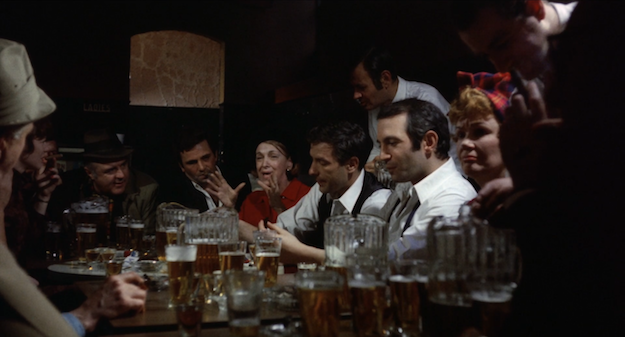 Cassavetes hated being pigeonholed as an improvisatory director, because it suggested he just showed up on set and winged it. But, again and again, he prioritizes behavior over what can be written on the page, trying to find the truth in a moment. This search for truth, for something beyond what is thoughtlessly accepted, is an obvious parallel between the three lead actors and the roles they are inhabiting. At any point in Husbands, it's hard to judge who is having more fun pushing the boundaries of a situation: the characters or the actors playing them.

I think it's that blurred line between the story and reality that made this most recent viewing of Husbands more uncomfortable for me. There's not just the horror of seeing "men behaving badly" in the context of the fictional world, but in watching the other actors seemingly get brutalized. Leola Harlow's poor singer in the barroom sequence is harangued for eight straight minutes -- Gazzara steals her hat, Cassavetes prods Falk to kiss her, Falk tries to shock her by stripping off his clothes -- and one is left unsure if Harlow, as an actor, is genuinely game for these shenanigans or if she's withstanding all this to not get fired by the director and his friends.

To be fair to Cassavetes, and to highlight one of the reasons I enjoy his work, he clearly loves actors -- especially imaginative actors. That's what drew him to Gazzara and Falk, and what made the three of them fast friends. But that love also allows him to fill the space around his central manchildren with indelible supporting and character turns. In the one moment where we see Cassavetes's character Gus at work as a dentist, we are treated to an amazing performance by Eleanor Zee as a patient so nervous about dental work that she can't stop laughing. Both Gus and Cassavetes are happily astonished by the moment. Later, after the main characters have abandoned their families and absconded to London, there's a wonderful one-off performance in a gambling club where Falk tries to pick up a fancy older woman (Delores Delmar) and is horrified to discover she's up for much more than he is. Delmar's misguided intensity transforms a throwaway moment into a memorable gem of a scene.

While in London, Harry, Gus, and Archie each manage successfully to pick up a young woman to keep them company. To Cassavetes's credit, these women are as contradictory and strange as his leads. Harry is paired with Pearl (Jenny Lee-Wright), who feels stung by Harry's constant references to his wife but enjoys comforting him nonetheless. Gus chooses Mary (Jenny Runacre) because she's tall and blonde, but they share a mutual attraction/repulsion that leads to the most uncomfortable and psychologically fraught "seduction" scene I've ever seen onscreen. In an interesting elision, we never see Archie meet up with Julie (Noelle Kao), a young Chinese student, but we see them alone in his room later. Archie prods Julie to talk, even if she can only speak in broken English. She remains silent, leaving us to wonder if she can't speak to Archie or just doesn't want to. There are many close-ups of silent women in Husbands, looking on as one of the men ramble on. Noelle Kao's close-ups struck me as the most poignant this time, with her character clearly just looking for some kind of connection and finding none with Peter Falk's Archie.

Columbia marketed Husbands as "a comedy of life, death, and freedom." Most viewers probably won't laugh it up as much as Harry, Gus, and Archie do, but there are some exquisite moments of prolonged cringe comedy -- especially between the "husbands" and their London conquests -- that reveal an unexpected kinship between John Cassavetes and Sacha Baron Cohen.

I still think Husbands is a helluva picture, even though I found myself more upset than exhilarated this time around. 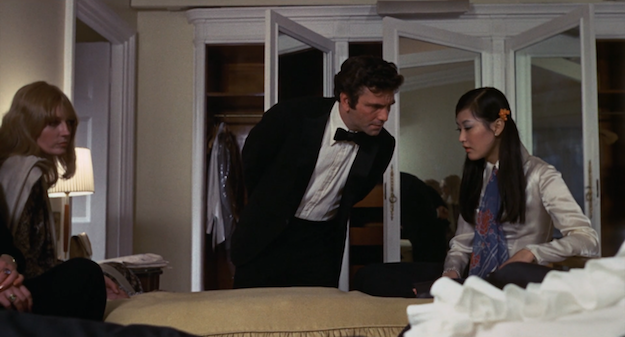 The Blu-ray
Husbands is packaged with a fold-out featuring a great essay by Support the Girls director Andrew Bujalski.

The Video:
Sourced from a new 4K restoration, the AVC-encoded 1080p 1.85:1 presentation looks outstanding. Victor Kemper shoots most scenes with a shallow depth-of-field -- and Cassavetes notoriously refused to give actors specific blocking -- so some moments are soft, but they've always been soft. Otherwise, detail is strong. Colors are accurate, notably better than the 11-year-old DVD transfer. Film grain is well-resolved. Just a thoroughly satisfying upgrade.

The Audio:
Apart from a bass-heavy cue during the opening photo montage, there is no music to fill up the LPCM mono audio track. It's mostly just talking -- and yelling and screaming and fighting and laughing. And it comes through just fine. Some bits of dialogue from peripheral characters are low in the mix (by design), but the English SDH track does a surprisingly thorough job of transcribing these lines.

- Brought over from the 2009 DVD, this is a well-researched and breezy commentary from critic and Cassavetes biographer Fine.


Final Thoughts:
Here's where I get tied up in over-thinking. As far as Blu-ray releases go, this has got to be the most definitive release any fan of Husbands could hope to see. It looks and sounds great, plus the extras are truly informative and entertaining. I would have wagered anything going into this re-watch that this was an easy addition to the DVD Talk Collector Series. But then I re-watched the film. It still has incredible performances and exudes an astonishing emotional power. But I was more uncomfortable and put off watching Husbands this time than I ever have been before. I can't in good conscience urge folks into a blind buy. Check it out on the Criterion Channel first. If you know and/or love the film, this disc is Highly Recommended. 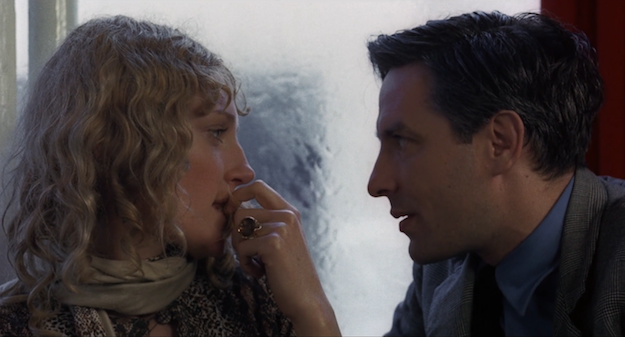