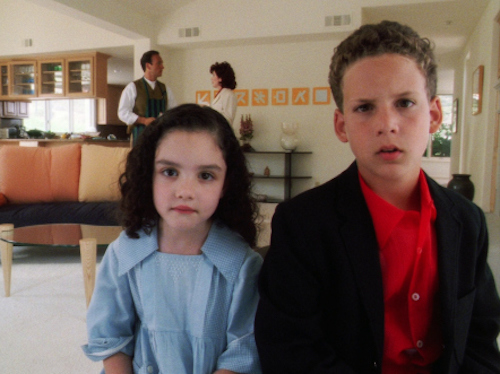 If the 1993 miniseries Wild Palms is remembered these days, it is probably remembered as "not Twin Peaks." ABC killed the golden goose that was David Lynch and Mark Frost's show, so they tapped producer Oliver Stone to give them something else in that vein. He turned to novelist/screenwriter Bruce Wagner (Maps to the Stars), who cooked up a 5-episode/6-hour "event series" that confused viewers as much as Twin Peaks had, but failed to break out in the same way.

Viewed now, on Kino Lorber's restored Blu-ray edition, the failure makes sense -- even though the show is strangely excellent. Lynch and Frost made a twisted soap opera, as invested in the soapiness as it was in Lynch's uncanny dream-logic mythology. Meanwhile, Wagner's vision is just as cinematic and idiosyncratic, but his cyberpunk operatics and constant pop culture puns seem to be channeling Philip K. Dick as re-written by Thomas Pynchon. It's a trickier gambit to snare TV viewers -- even '90s "prestige" TV viewers.

Set in the near-future of 2007, the show does what all good sci-fi does and reflects the present in slightly outsized fashion. The clothes, the cars, and the music all harken back to earlier eras, but the anachronistic mishmash gives the show an appropriately unsettling edge. Phedon Papamichael's cinematography makes the bright sunshine and colorful design of Los Angeles a little too bright and a little too colorful, turning a would-be paradise into a subtly nightmarish dystopia.

At the center of this nightmare is Harry Wyckoff (James Belushi), a talented patent attorney who is called on by an old flame, Paige Katz (Kim Cattrall), to find her lost son. Wagner's script is packed with more references than Quentin Tarantino's dream journal, so Wyckoff skeptically notes the "Raymond Chandler" of it all. Still, Paige looks mighty appealing in her femme fatale pose, so Harry agrees to see what he can do. At home, Harry seemingly has a sweet deal, with a gorgeous wife, Grace (Dana Delany), and two cute kids, Coty and Deirdre (Boy Meets World's Ben Savage and Monica Mikala). But there are cracks in this homey facade: little Deirdre refuses to speak, and Grace harbors suspicions that Coty is not actually her son.

While that might sound paranoid, Wild Palms is the kind of story where paranoia is entirely warranted. Harry starts seeing people beaten in public and abducted by men in suits. They may or may not be related to an L. Ron Hubbard-ish leader, Senator Kreutzer (Robert Loggia). Kreutzer runs a TV network, and he has a multi-pronged plan to infiltrate American households and minds with a three-dimensional holographic broadcast system, best experienced with a chilled glass of a psychoactive beverage called Mimezine. Senator Kreutzer is the boss of Harry's old flame, Paige Katz, and he also has some sort of connection to Grace's mother, Josie (Angie Dickinson).

I could explain further, but the world of Wild Palms expands the moment one thinks they have it mapped out. Even though I've nailed down the important principal characters, there's a whole slew of folks -- Ernie Hudson, Bebe Neuwirth, Nick Mancuso, Brad Dourif, David Warner, Robert Morse, Bob Gunton, Charles Rocket, Charles Hallahan, François Chau, and Eugene Lee -- whose characters become integral to the plot.

Wild Palms has a reputation for being opaque. Phil Joanou (State of Grace), who directed the last hour of the series, makes it clear in his audio commentary that even he didn't get it. But it's not really that hard to grasp. There are oppressors and rebels at war with each other. Harry stumbles into this war and has to pick a side. And it's not so easy.

Wagner disorients viewers with surreal imagery, but he plays fair: almost all of those images have logical pay-offs farther down the narrative road. At one point, Harry follows a couple of men into his empty swimming pool. They reveal a secret trap door in the pool and tell Harry to get inside. He is left to wonder out loud, "Am I dreaming?" He isn't, and the story explains the trap door soon enough, but the audience can't help but wonder along with him in that moment.

The cast of Wild Palms is generally outstanding. Dana Delany gives the kind of multi-layered performance that makes one angry that she didn't have a higher profile career. Kim Cattrall initially seems typecast as a wounded vamp, but she finds surprising shading in Paige. It's also a pure delight to see Angie Dickinson and Robert Loggia both be menacing in the most operatic, scenery-chewing ways possible.

In many reviews of the series, James Belushi is often pegged as miscast in the lead role of Harry. In this viewer's eyes, his natural everyman quality provides an unexpected earnestness to counterpoint the show's overall bombast. There are cooler dystopian heroes, sure, but Belushi mostly works for me. (A few scenes could have been better.)

Oliver Stone has his name above the title on this series, but he did not direct any of the episodes. Peter Hewitt (Bill and Ted's Bogus Journey) directs the first, double-length episode; Keith Gordon (A Midnight Clear) directs the second and fourth; Kathryn Bigelow (who also has a small but important acting role in the show) directs the third; and Phil Joanou bats clean-up.

Hewitt ably sets the style template for the show, but Gordon seems to be the director most on the wavelength of creator Bruce Wagner. Gordon's preferred shooting style of floaty Steadicam long-takes creates the right semi-dreamy ambience. Bigelow -- whose Strange Days has a fair share of similarities with this show -- delivers some lean, mean action in the Point Break mold. She also executes a violent sight gag so horrifying I'm surprised it made it onto network TV. Joanou's approach is too meat-and-potatoes for the outlandish material, and it doesn't help that the script for the finale is easily the show's weakest.

Wild Palms will never be Twin Peaks, but the secret is: it wasn't really trying to be. With its off-kilter visuals and reference- and pun-filled dialogue, Wild Palms is its own strange animal. 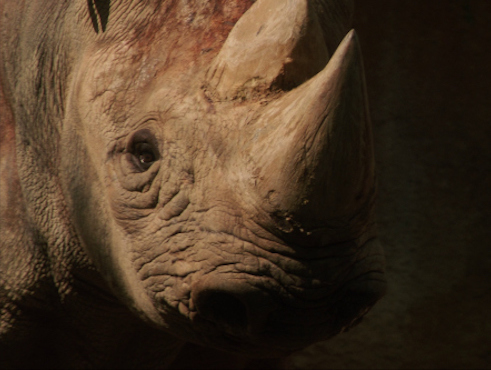 The Blu-ray
Wild Palms is presented on 2 BDs, packaged in a standard-sized keepcase.

The Video:
Considering that Wild Palms was one of the '90s most pointedly cinematic miniseries, it is fitting that the show has been restored (mostly) like a film. This AVC-encoded 1080p 1.33:1 presentation is based on a 2K scan of the original camera negative, and it looks exceedingly crisp and clean. The colors pop. This is starkly contrasted with some muddy SD cut-ins, mostly for shots with titles over them, although it happens on the VFX shots too. Those VFX moments I get, but it seems odd that they wouldn't just try to recreate the titles over hi-res footage. There are sporadic instances of dirt and debris flitting through, but otherwise this is a jaw-dropping upgrade over the original broadcast and the 2005 DVD.

The Audio:
The DTS-HD MA 2.0 stereo audio mix sounds well-balanced but not particularly showy. Dialogue is clear. There are some golden-oldie needle-drops, including a pair of Rolling Stones songs. The synth-heavy score by Ryuichi Sakamoto is the only element of the series that feels like it might be self-consciously tipping its cap to Twin Peaks -- especially the kitschy romanticism of the main theme. There is an English SDH track, but it is dogged by typos and weird glitches throughout. For instance, the word "came" is inexplicably italicized whenever it comes up in the dialogue.

- New audio commentaries on all five episodes. Peter Hewitt and Kathryn Bigelow are both no-shows, so creator Bruce Wagner talks over those two episodes; he is joined by James Belushi on the pilot and by Dana Delany on episode 3. Unfortunately, Wagner apparently didn't re-watch the show before doing the commentary, and sometimes he gets a little lost. Director Keith Gordon, on the other hand, has much clearer recollections about the production, and his 2 commentary tracks are much peppier and tidbit-filled. I couldn't finish the Phil Joanou commentary on the final episode, because he spent way too much time up front complaining about how he didn't understand the show or think its stylistic conceits worked. Maybe he takes a different tack eventually but... eh... I'm good.

Final Thoughts:
It's been years since I've watched or even thought about Wild Palms. I misremembered it as a dated artistic failure when actually its trippy dystopic satire might play better now. It's extremely cool that the miniseries was restored from the original negative for this release. Pop in a disc, sip some Mimezine, and settle in. Recommended. 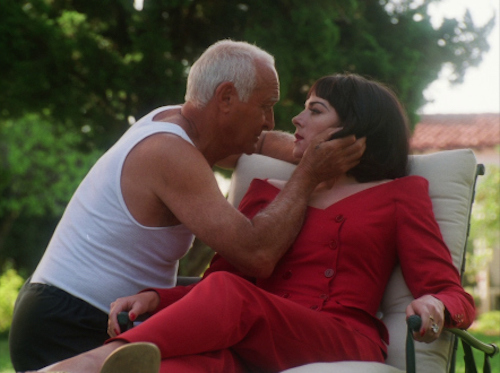