Film Movement // R // June 16, 2020
List Price: $44.95 [Buy now and save at Amazon]
Review by Stuart Galbraith IV | posted July 7, 2020 | E-mail the Author
Film Movement's 2 Films by Claude Sautet serves as an excellent introduction to the French director and screenwriter. I confess that while Sautet's crime drama Classe Tous Risques (1960) remains a personal favorite, I was only vaguely aware of his later films. But clips from several appear in Bertrand Tavenier's documentary My Journey Through French Cinema and piqued my interest. Film Movement's earlier release of Sautet's superb Max and the Junkmen (Max et les ferraileurs, 1971), starring the late Michel Piccoli and Romy Schneider, furthered that growing interest, and these new releases - Les choses de la vie (1970) and César et Rosalie (1972) - are about equally good, if in different ways. This release is subtitled "Starring Romy Schneider," as she's in both films, albeit more of a supporting part in the earlier one. Piccoli dominates Les choses de la vie and his voice is heard briefly in the latter, whose leading man, Yves Montand, delivers a wonderfully nuanced performance playing, for him an atypical character.

Both films look and sound great and include excellent supplements. 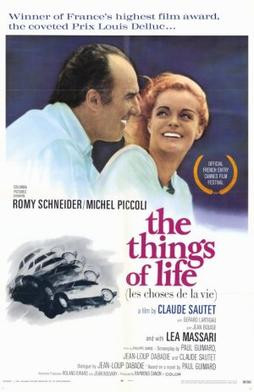 Les choses de la vie ("The Things of Life") examines the life of Pierre (Piccoli, excellent as usual), a 40-something architect. The movie has a highly unusual structure, reminiscent of An Occurrence at Owl Creek Bridge. It jumps backwards and forwards in time, its narrative revolving around a spectacular car crash in rural France, in which Pierre is thrown from his vehicle.

The crash itself is shown in excruciating detail about midway through the film, but the movie itself begins in its immediate aftermath. In the moments before, during, and after the accident, with Pierre in a semi-conscious state, the movie audience sees various key moments in his adult life, just not chronologically.

Gradually we learn that he is married to Catherine (Lea Massari) but has also taken a lover, Hélène (Schneider). He later leaves his wife for Hélène, but shortly before the accident tries to renew his relationship with his teenage son, Bertrand (Gérard Lartigau). (Amusingly, all the characters in the film smoke constantly, including Bertrand. The film's IMDb entry even offers a cigarette count: 46.)

As with Max and the Junkmen, Piccoli plays a staid, reticent character, whose self-destructive ambivalence and noncommittal nature frustrates both Catherine and Hélène. He's so torn between two women he loves he winds up with neither. The unstuck time aspects of the film never seem gimmicky, and Pierre's stream of consciousness, i.e., his internal thoughts, gradually taking the form of hallucinations, as he struggles to stay alive after the crash eventually become quite harrowing.

Though built upon a simple, single idea (its non-chronological approach), Piccoli's marvelous performance, internalized as in Max and the Junkmen, keep it fascinating throughout. 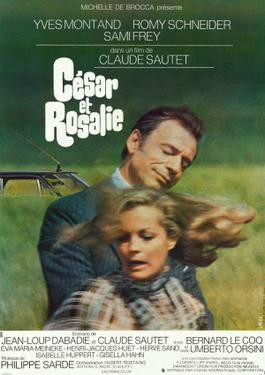 César et Rosalie explores the complex yet unexpectedly civil love triangle among César (Yves Montand), Rosalie (Romy Schneider), and David (Sami Frey). Rosalie is a single mother, having been married once before but at the time also involved with graphic artist David, he recently returned from America after five years. She's presently in a relationship with middle-aged César, a self-made, wealthy scrap merchant.

César is rough around the edges but also a real charmer; at parties everyone gravitates to his circle. Despite his bottomless wallet he has the taste of the nouveau riche, Rosalie scolding him for wearing "yellow" shoes with a dark blue suit at a wedding. He's childlike but also insanely jealous and impulsive. When Rosalie disappears in the middle of an all-night poker marathon at his home, he becomes obsessed with finding her.

She, on the other hand, is something of a free-spirit, clearly nobody's woman, and flirts with the idea of resuming her affair with David, but never the idea of actually living with him, which he suggests. As César becomes increasingly desperate, it's soon clear that Rosalie loves them both. César is undeniably sweet and loving but also prone to fits of violence (he trashes David's studio, causing extensive damage) and immaturely needy. David is 20 years younger, shy if passionate, but in his own way irresponsible. What to do? Trying to win her back, César buys her family's former holiday home on the island of Noirmoutier, in the Atlantic, inviting Rosalie's entire family to spend a nostalgic summer there. (One is Marite, played by a very young Isabelle Huppert.) Everything seems idyllic yet Rosalie is still vaguely unhappy, so César takes a big gamble and decides to invite David. To their mutual surprise, César and David, despite their mutual love for Rosalie, find that they genuinely like one another.

The role was a big departure for the suavely handsome Montand. He's handsome here, too, but his animated way of speaking and his childlike gesturing is uncannily similar to the later screen persona of Italian comedian Roberto Benigni, adjusted to 45rpms to Benigni's 78rpms. (Don't believe me? Watch the film and I promise you'll see it.) Despite Montand's own reputation and persona, according to the supplements, the character of César is reportedly much closer to what the actor was like in "real life." Sautet reportedly based César on his brother.

The movie's approach to this unusual arrangement is typical of the much more adult and subtler than Hollywood-made love stories, the kind of thing that French filmmakers, at least from the 1940s through the ‘80s, explored so intelligently. Enigmatic Rosalie, a part conceived for Catherine Deneuve but better suited for earthier Romy Schneider, in American hands might have come off as exasperatingly selfish and manipulative. But in her hands, she comes off as far more mature than the much older César, more adult than David. When one of the men causes her grief, she simply packs up and leaves them. No big emotional scene; one moment she's just gone. And yet, when César in his desperation tracks her down, she's remarkably adult. We he shows up in Sète where she and David have run off to, they picnicking on the beach, they maturely offer him food and wine, cautiously welcoming him.

It's a beguiling, intimate little film: funny and sad, lushly romantic yet unsentimental.

Film Movement's two-disc set offers both films in their original 1.66:1 widescreen aspect ratios, with LPCM mono. Each looks and sounds terrific, with strong, correct color with just the right sense of film grain. The English subtitles are excellent, and the discs are Region "A" encoded.

Both films get long-form documentaries featuring members of their cast and crews, with much behind-the-scenes information about their conception, production, and release. These were apparently done in France several years ago, as a number of the participants have since passed away. A 16-page full-color booklet with an essay by writer David N. Meyer compliments the other extras.