The comedy team spent nearly their entire movie career under contract at Universal where, early in their career, the studio occasionally loaned them out to MGM. Later, they renegotiated the terms of their contract to allow them to make one outside film per year. The first, The Noose Hangs High (1948), was distributed by Eagle-Lion Films, while Africa Screams, a joint production of A&P grocery store heir Huntington Hartford and the Nassour brothers (whose logo shamelessly imitates that of 20th Century-Fox), was a United Artists release.

Back when I discovered Abbott & Costello in 1970s, when WXYZ-TV, Channel 7 in Detroit, ran their movies Sunday mornings at 9:00am, the syndication package included all the Universals and MGMs, plus their two Warner Bros. releases from the early ‘50s (Jack and the Beanstalk and Abbott & Costello Meet Captain Kidd, though these color movies were presented in black-and-white) but not The Noose Hangs High, Africa Screams, or their final movie together, Dance with Me Henry (1956), an Allied Artists release. Those three I didn't see for many years later. In the case of Africa Screams, I ended up renting a 16mm print around 1980. Soon after, with the emergence of home video, that film became very easy to see, as it had fallen into public domain, and every fly-by-night label released it, though always sourcing very poor film elements.

The 3-D Film Archive's Bob Furmanek, who co-wrote the best book about the team, Abbott and Costello in Hollywood spearheaded the restoration of the film, further enticing buyers with scads of interesting extras. 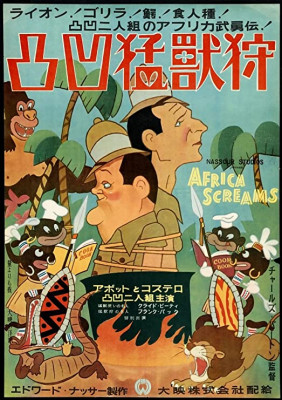 The short (79-minute) film, unlike most of the team's early pictures, is unencumbered by musical interludes and romantic subplots: it's pure Abbott & Costello comedy throughout, though its plot is notably thin.

At Klopper's Department Store (in New York City, apparently), icy and erudite blonde Diane Emerson (Hillary Brooke) is looking for a copy of the out-of-print book Dark Safari, anxious for its reproduction of a map needed for her own safari to darkest Africa. She informs Buzz Johnson (Abbott) that she's willing to pay $2,500 for a copy of the map, he aware that co-worker Stanley Livingston (Costello) has not only read it, but has apparently memorized details of the map. Later, overhearing Diana striking a deal with famous animal trainer Clyde Beatty (Clyde Beatty) to lead the expedition for $20,000, Buzz insists on a similar arrangement, and that she take Buzz and Stanley along.

Joining the party are shady Diana's goons, Boots and Grappler (Max and Buddy Baer, famous boxers); nearsighted hunter Gunner (Shemp Howard), and Diana's excitable butler, Harry (Joe Besser). Diana, it turns out, isn't actually searching for a legendary giant ape as she claims, but rather a fortune in diamonds supposedly somewhere nearby. Along the way a normal-sized male gorilla (Charles Gemora) falls in love with Stanley, while the others encounter big-game hunter Frank Buck (Frank Buck).

Abbott & Costello had been red-hot in the early-1940s, arguably the most popular stars of that era, but in 1943 things ground to a halt when Costello was struck down with rheumatic fever, which plagued his entire adult life. Bedridden for months, he was about to return to work when his infant son drowned in the family pool. In his grief his screen persona changed subtly, his character becoming more sentimental (even cloying in their worst films) and increasingly childlike. Bud and Lou quarreled and in two films (Little Giant and The Time of Their Lives) don't even appear as a team. They were unhappy with the quality of the scripts, talent, and production values Universal gave their features, and quality went downhill.

Ironically, one of the scripts Costello reportedly hated at first, Abbott & Costello Meet Frankenstein (1948) became their biggest hit in many years. Gradually, however, the quality of their film work again slipped as they continued grinding out movies into the 1950s. Conversely, the new medium of television revitalized them. On both The Colgate Comedy Hour (beginning in 1951) and The Abbott and Costello Show (1952-54) they were sensational, feeding off the live audiences of the former and the nostalgic, Burlesque-like atmosphere of the latter. Their TV work was far funnier than any of their movies by this point.

Africa Screams is significantly better than average because it in many ways anticipates their later TV show. The team seems to have been surrounded by personal friends in the cast, while both Brooke and Besser would later become regulars on their TV series. Actor-turned director Charles Barton started out in that latter capacity making low-budget programmers but turned out to be the team's best director, striking the right balance between indulging the two stars (who preferred gambling and practical jokes on sets rather than working) while getting reasonably disciplined performances out of them.

The strange jumble of talent (professional wrestlers, a wayward and future member of the Three Stooges, Great White Hunters, etc.) meshes quite pleasantly. Though Shemp Howard doesn't get to do much, disappearing from the film for long stretches, Joe Besser gets a lot of screentime providing very funny comedy relief from the comedy relief, while non-professional actor Clyde Beatty is quite agreeable in his substantial part. (Frank Buck comes off a bit curmudgeonly.)

The script, credited to all-over-the-map writer Earl Baldwin (Doctor X, Wild Boys of the Road, Wonder Bar; Leonard Stern and Martin Ragway also worked on it, uncredited) only fitfully falls back on the team's burlesque routines, perhaps due to the absence of their usual contributor, John Grant. The team was notorious for their ad-libbing, and Africa Screams is the kind of film that would seem to allow an almost free-for-all atmosphere. Certainly, the picture's funniest scene, of Stanley terrified of the lovesick (and apparently gay) gorilla, hopelessly tries eat lunch while the ape, in the bushes beyond, attempts to seduce him. Undoubtedly owing to the success of Meet Frankenstein, Costello spends much of the film scared of everything around him.

Though made for around $500,000, several hundred thousand dollars less than their Universal fare, Africa Screams has good production values and surprisingly excellent visual effects. In these overly-sensitive times, the picture by today's standards is outrageously politically incorrect, with its cannibalistic black African natives, who in one scene turn "white" with fear when a Kong Kong-sized gorilla turns up near the end. But as a spoof of jungle films like the Tarzan and Jungle Jim movies, it hits all the right marks.

Sourcing surviving nitrate film elements, Classic Flix's release of Africa Screams looks stupendous, the black-and-white, 1.37:1 standard frame feature looking as good as the very best B&W ‘40s titles on Blu-ray thus far. The 2.0 mono DTS-HD Master Audio is likewise a huge improvement over earlier home video releases. The title began as a Kickstarter campaign and its release is limited to 2,500 copies, so get yours now.

The supplements are illustrative and imaginative. They begin with a very informative audio commentary by Furmanek's co-author on the Abbott & Costello book, Ron Palumbo. The disc opens with a restored trailer for The Noose Hangs High and, elsewhere, includes restored trailers for two Cinecolor titles, El Paso and Jack and the Beanstalk, Africa Screams having originally been conceived as a Cinecolor production itself. "The Rubdown Sketch" from a Colgate Comedy Hour is presented upscaled to high-def; there's footage of Costello with Max Baer and Joe Louis from 1940 and Clyde Beatty's Animal Thrills, a 1943 short; several minutes of bloopers are offered, which include a very funny ad-lib from Shemp Howard that should have been retained; two versions of the same Abbott & Costello radio show from 1948 (with guest Bela Lugosi), one presented in its original, unedited form, running about 10 minutes longer. Also include are expansive image galleries with behind-the-scenes photos and promotional materials.

One of the best extras is a 3-D Abbott & Costello comic book from the early 1950s. Offered in both 3-D Blu-ray format and anaglyphic format (with a pair of glasses provided for the latter), it's enormous, eye-popping fun, like five or six mini-movies put together, with very good 3-D effects.

The restoration of Africa Screams all by itself would be desirable, but the avalanche of well-chosen extra features makes this one of the best releases of 2020 so far. A DVD Talk Collectors Series title.