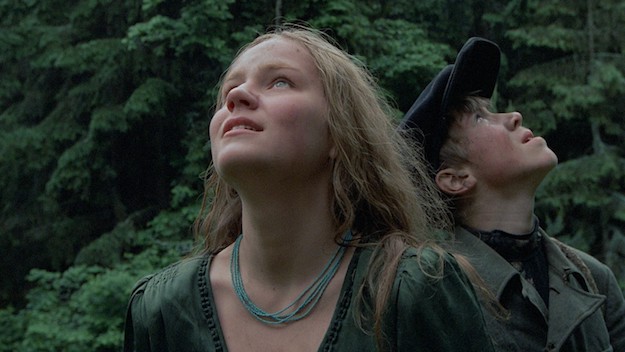 The 1985 film Come and See is visceral and horrifying, a nightmarish reflection on World War II whose unsettling effect is amplified by moments of surreal poetry. Director Elem Klimov was a child in Stalingrad during the war, and his co-writer Ales Adamovich was a teenage partisan. Clearly, the memories of the suffering they witnessed and experienced remained vivid over the years because Come and See not only feels authentic, it has the directness of someone who cannot lie about what they know. With the threat of World War III looming at the time of the film's making, Come and See's immediacy can be read as an anti-war plea. But where "message movies" typically come with a kind of dramatic trap door in the form of "here's the point we're making," Come and See just places viewers in a situation and offers no solace.

Flyora (Alexei Kravchenko) is thirteen or fourteen years old, living in Belorussia (now Belarus). In the film's first scene, he and a friend are digging in the sand. Flyora is looking for an abandoned weapon, so that he can join the partisans fighting against the Nazis. The film's horror-movie dread is introduced almost immediately, as a passing old man portends doom if Flyora finds the weapon he is seeking. Flyora's friend also speaks to him with an unsettling croak as they look for a rifle. The juxtapositions of attitudes and atmosphere give the film a simultaneous earthy reality and uncanny unreality that it maintains throughout.

Flyora manages to find a working rifle and he joins the partisans, much to his mother's dismay. He, meanwhile, is overjoyed. Flyora starts off with a naive vision of war as an opportunity for heroism. The film gradually and gruelingly disabuses him of this notion. At the partisan camp, he is left behind with a young woman named Glasha (Olga Mironova). A bombing raid destroys the camp and leaves Flyora partially deaf -- a development that Klimov reflects in the sound design for the rest of the film. Flyora and Glasha start traveling in search of safety. They bond during their brief time together, but this all-too-brief period is merely a sliver of respite before the reality of war comes rushing in on both of them.

I was honestly hesitant to start watching Come and See because of its reputation. Echoing news stories about the initial showings of The Exorcist, Come and See caused some Russian theater patrons to pass out and require medical attention. I'm glad I waited until I was in the right headspace, because the film is excellent -- ingeniously conceived, meticulously crafted, and sensitively acted by a largely inexperienced cast -- but its horrors are so affecting that I could have easily just shut down and had to turn the film off. I don't mean to make the film sound like a gonzo endurance test for viewers: that's not its purpose and that's not its effect. But it also seems ill-advised to minimize the film's impact. The marriage of artistic clarity and brutal honesty makes this a much more dangerous-feeling experience than most viewers are accustomed to.

And, as the supplemental materials on Criterion's disc make clear, the film does not tell all. The Nazis perpetrated far more ghastly and torturous acts on the Belorussians, a small few who survived and offered their testimony in interviews. I actually did have to shut off these interviews because the things they described were so awful. As in the film Come and See, the fact that we are able to see someone survive these horrors does not bring comfort, catharsis, or uplift. Maybe, as the images haunt us for days afterward, it instructs and molds our humanity for the better. We must hope for that. 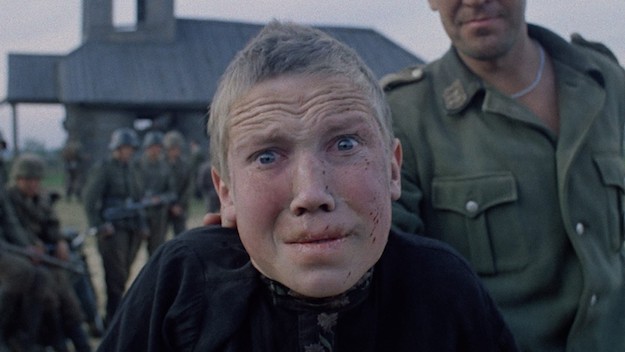 The Blu-ray
Come and See is packaged with a booklet featuring essays by Mark Le Fanu and Valzhyna Mort.

The Video:
Based on a new restoration from Mosfilm, the AVC-encoded 1080p 1.37:1 presentation is outstanding. Some shots look like they might have had some filtering or noise reduction, but for the most part, this is crisp, clean, and well-resolved. The colors are sumptuously saturated, even if the costumes and production design are typically muted in army greens, grays, and blacks.

The Audio:
It's a testament to ingenuity of the director and sound department that this Russian LPCM mono audio mix (with optional English subtitles) is so nuanced and dynamic that it creates an ambience more enveloping than dozens of actual surround mixes. There are noticeable technical flaws.

(HD, 10:00) - The Oscar-winning cinematographer of 1917 shares his reactions to Come and See's filmmaking and discusses its impact on his own work.

Final Thoughts:
The 1985 war film Come and See is a difficult watch, but arguably a necessary one. The A/V quality of this new release burnishes the poetry and technical ingenuity of the film. The extensive supplemental features illuminate the filmmaking process and also the history of Nazi Germany's extermination of Belorussian villagers. I watched this disc a few days ago, and it's still scorched into my mind. Incredibly powerful. DVD Talk Collector Series. 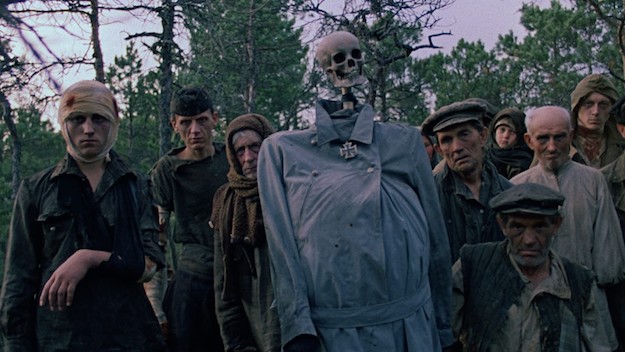