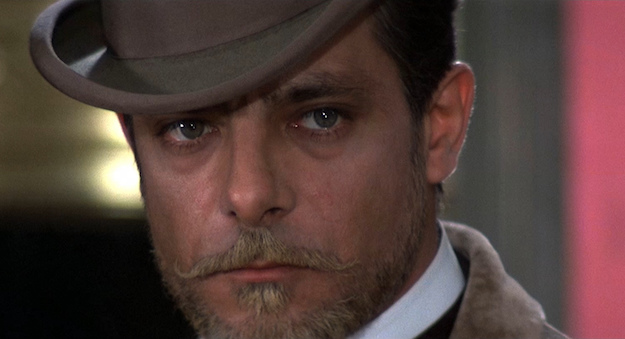 Released internationally in 1976, the period drama L'Innocente (The Innocent) was the final film of Italian director Luchino Visconti, known for sumptuous and sensual work like The Leopard and Death in Venice. The film is based on the 1892 novel by Gabriele D'Annunzio, which has also been known in English as The Intruder or The Victim. These alternate titles are more thematically on-the-nose once we understand to whom the title refers, but one can still find agreeable ambiguity in determining which character in the story is the innocent, which is the intruder, which is the victim.

While the title most likely refers to an illegitimate child whose right to live becomes much contested, one can imagine the film's antiheroic main character viewing himself as a kind of innocent too. Much like the men in Eric Rohmer's Six Moral Tales, Tullio Hermil stays true to his own (in this case, decidedly atheistic) moral code that serves himself above all others. Giancarlo Giannini plays Tullio as a more refined, aristocratic version of his weaselly Seven Beauties character, Pasqualino. Both men are hedonists, but Tullio's impulses are coiled and waiting. Giannini's performance plays more in his face, and he beautifully communicates the character's shifts from mild perturbation to outright heartbreak to animalistic cruelty and callous calculation, almost entirely through looks.

Of course, Visconti loves looks anyway. The film's plot turns on the affair between Tullio's wife Giuliana (the equally expressive Laura Antonelli) and a young and dashing novelist presumably modeled on our story's author, Filippo D'Arborio (Marc Porel); they barely exchange words onscreen. It's all meaningful glances and unbroken stares from across rooms. Once Tullio pieces together the affair and encounters Filippo at his fencing club, even their communication boils down to a series of disgruntled glares in the shower room. (One can't help but project that -- even though Visconti gives us no POV shot -- Tullio is also sizing up his rival's penis, which makes him madder still.)

The audience might be left to think that it serves him right. After all, Giuliana was only inspired to take up a lover because Tullio had abandoned her in pursuit of his preferred mistress, Teresa Raffo (Jennifer O'Neill, looking great but rather sloppily dubbed). In fact, Tullio only begins to care about Giuliana again once he realizes that another man desires her. At one point, he suggests to Giuliana, as he pulls her clothes off, that they should behave like she was his mistress. Giuliana is hesitant, and both Antonelli and Visconti are effectively ambiguous whether she holds back for her own moral reasons or because she would just rather be with Filippo. (Although we can guess...)

Eventually, Tullio learns that Giuliana is pregnant with Filippo's baby. He demands that she get an abortion. She refuses. She claims she won't because of the criminal and moral implications, but Tullio suspects it is because she wants to hold on to the memories of her love affair. While the audience can delight in the extremes that Giannini's performance is pushed into because of Tullio's frustrations, Antonelli is such a sympathetic foil that we can only hope that her character finds a way around her husband's calculations.

Visconti's detractors often peg his films as slow and boring. I must admit that L'Innocente takes a little too long to get going at the start, but once the world of the film and the characters coalesce, the story and performances are gripping. While it might not have the reputation of other late Visconti films, L'Innocente is a wholly worthy final work from this Italian master of melodrama.

The Blu-ray
L'Innocente is packaged with a booklet featuring stills and a new essay by Dan Callahan.

The Video:
This AVC-encoded 1080p 2.35:1 transfer is a stark improvement over the muddy, yellowish 2009 DVD release. Colors look truer. Clarity and contrast is excellent, with only a few minor flaws here and there. In general, the image is clean with well-resolved film grain.

The Audio:
There are some obvious age-related limitations on the Italian LPCM 2.0 mono audio (with optional English subtitles), but for the most part it's a satisfying-sounding remaster. The dialogue seems to have been entirely post-dubbed, which sometimes makes for distracting lip-flap.

(HD, 12:54) - A video essay by Ivo Blom, in which he breaks down different visual aspects of the film.