Kino // Unrated // August 25, 2020
List Price: $24.95
Review by Stuart Galbraith IV | posted September 15, 2020 | E-mail the Author
A notorious pre-Code biblical epic directed by Cecil B. DeMille, The Sign of the Cross (1932) is a film I'd been curious about for decades, having seen clips of its most salacious and sadistic "highlights." The UCLA Film & Television Archive, working with the DeMille estate, restored the film to its original, uncut release version (it had been heavily cut for reissue, with new footage added), and I'm glad to have finally had the chance to see it in all its lurid glory, via Kino's new Blu-ray.

As a movie, The Sign of the Cross is interesting, even fascinating at times, but not very good. It tells virtually the same story told better in later movies like Quo Vadis (1951), The Robe (1953), and in some respects even Ben-Hur (1959). DeMille's last film as director, The Ten Commandments (1956), was almost a throwback to silent era and early talkie storytelling, yet somehow DeMille pulled it off, despite the terrible dialogue and florid, larger-than-life performances, a requirement, really, for this type of film. (Much of the credit there was due to the shrewd casting of Charlton Heston and Yul Brynner in the lead roles.) With The Sign of the Cross DeMille isn't so lucky; the four leads are all over the map, acting-wise, and the weaknesses of the screenplay, the familiar DeMille style of preachy morality contrasted with the more intriguing sinning, are underscored by their inconsistent acting. 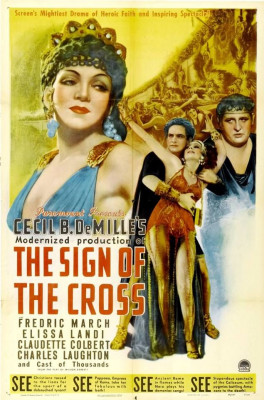 Following the burning of Rome, Emperor Nero (Charles Laughton) decides to cast blame for his destruction on the growing number of Roman Christians. At a secret sermon featuring Titus (Arthur Hohl), Tigellinus (Ian Keith) of the Praetorian Guard, having tortured teenager Stephan (Tommy Conlon) into revealing the meeting's location, arrows most of the Christian faithful, saving the survivors to be tossed to the lions in the Coliseum.

Marcus Superbus (Frederic March), prefect of Rome, having briefly met Stephan's adopted sibling, beautiful though devout Christian Mercia (Elissa Landi), intercedes on her behalf. He falls, none-too-believably, madly in love with this woman he barely knows. But Empress Poppaea (Claudette Colbert), already lusting after Marcus herself, manages to dissuade the malleable Nero from pardoning Mercia. Unless, that is, she disavows her Christian faith.

These types of films almost always have the same basic plot. In Quo Vadis, for instance, also set in Nero's Rome, the military commander is Marcus Vinicius (Robert Taylor) and the devout Christian he falls for is Lygia (Deborah Kerr). In The Robe, Marcellus Gallio (Richard Burton) converts to Christianity before his co-star (Jean Simmons, as Diana) does, but the narrative is essentially the same. William Wyler's Ben-Hur puts a spin on things in making the believer/non-believer relationship between two men but, again, the story follows the same well-worn path.

The Roman soldier is always at first bemused and eventually irritated by the Christian faithful, by their stubbornness, even when the seductive riches and indulgences of Rome is offered as an alternative. He can't fathom their pointless seeming death wish, their willingness to sacrifice all to a god that seemingly abandons them, etc.

The major problem with The Sign of the Cross is that Marcus's love for Mercia has no dramatically logical basis, and that his increasing desperateness comes off as clumsy immaturity, reaching an almost comical level akin to Michael Scott's (Steve Carell) clueless attempts to win girlfriends on The Office. Elissa Landi projects the usual dreamy-eyed Christian certainty found in such pictures, but March gives the type of performance typical of early-talkie actors culled from the Broadway stage: artificially theatrical.

Charles Laughton and Claudette Colbert fair much better, despite problems. Laughton is made-up with an enormous, cartoony nose that suggests the Little Caesars Pizza character. At times he's over-the-top indulgent while in other scenes he's quite good, particularly those with Colbert. Though in Hollywood since 1928, The Sign of the Cross boosted her stock enormously. Oddly, she plays Empress Poppaea very much like her later established screen persona in films with modern settings; unlike her co-stars, she acts fairly contemporary and has a more relaxed, conversational delivery.

Colbert's nude scene, bathing in asses' milk, comes early in the picture. More playfully teasing than revealing, for 1932 audiences it must have been quite the eye-opener, and one senses Colbert knew its controversy would help her career.

As usual for DeMille's biblical epics, the director gets away with murder beyond Colbert's nude scene with other sexually suggestive material, graphic and implied violence with an emphasis on torture and sadism. He gets away with it, of course, because it's presented in the context of a story about Christian faith, a sermon on the mount, with much implied mounting. Even so, it's startling at times: a lesbian seduction dance, hints of sexual relationships between men, implied bestiality, Coliseum spectators sexually aroused by animals devouring human flesh. Like the specialty bin at a porn shop, there's even a battle between Amazon women and Pygmies, the latter speared and beheaded onscreen.

Presented in its original black-and-white, standard (1.37:1), The Sign of the Cross looks great, including all the restored bits, and comes with a three-minute intermission break about two-thirds of the way in. The DTS-HD (mono) audio is better than fine and optional English subtitles are provided on this region "A" encoded disc.

Supplements include two audio commentary tracks, the first a well-researched track by DeMille authority Mark A. Viera that puts all aspects of the production into context with much informative background material; the second, by frequent Kino commentator David Del Valle, is more a personal take on the sometimes-campy proceedings, with some overlap of material but with some unique observations.

Disappointing, considering its reputation, but still a must-see, The Sign of the Cross is Highly Recommended.