Kino // R // August 25, 2020
List Price: $24.95
Review by Stuart Galbraith IV | posted September 15, 2020 | E-mail the Author
Once difficult to see, Breezy (1973) is the third movie directed by Clint Eastwood (following Play Misty for Me and High Plains Drifter) and, more significantly, the first he directed in which he does not star*, and Eastwood's only such film until Bird fifteen years later.

Though Eastwood had made Dirty Harry (1971) for Warner Bros., at the time most of his films were produced in association with Universal. Breezy was anything but a typical Eastwood action-thriller but the studio, no doubt wanting to keep their star happy and retain his services, agreed to co-produce Breezy with his Malpaso Productions. The risk was minimal, as Breezy cost just $750,000, little more than the average made-for-TV-movie. Though Universal barely released it theatrically, it likely turned a small profit when it was sold to network television and later syndicated.

Though it received mixed reviews through the years, I was gobsmacked. Expecting the shaky early work of an indulged, relatively inexperienced director, I instead found Breezy unexpectedly adult and nuanced. It resembles Eastwood's later, smaller-scale character-driven films (Million Dollar Baby, The Mule) far more than his ‘70s output. The screenplay by Joyce Heims is sensitive and character-driven. Some negative reviews described Breezy as a kind of middle-age male sex fantasy but that's not correct. Heims billed herself as "Jo Heims" at the time, and perhaps some reviewers wrongly assumed this was written by a man. Though it certainly has its share of nudity and sexual content, they're a minor component of this engaging character study.

One suspects a big chunk of the small budget went to star William Holden and the composer of the film's score and lovely title theme, Michel Legrand. If so, they were worth every penny, while female lead Kay Lenz, making her feature debut, is outstanding, and should have had a major film career. 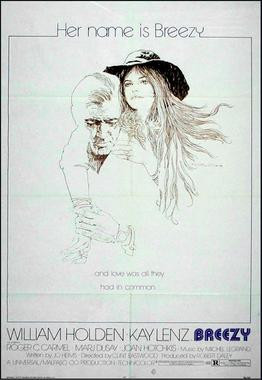 Set in Los Angeles, the story follows Edith Alice Breezerman (Lenz), "Breezy" for short, a 19-year-old free-spirit who is virtually homeless, relying on hippie friends and strangers to feed her and provide shelter.

Hitchhiking from the Laurel Canyon area, she catches a ride with a man (Norman Bartold) who offers her money for sex, but when she refuses he threatens to turn violent and she bolts from the car, hiding in the driveway of 50-something divorcee Frank Harmon (Holden), a wealthy real estate broker. He leaving for work, she jumps into his car uninvited, hoping it'll turn into an offer for lunch and perhaps more. He, however, is cynical and utterly resistant to Breezy's charms, though he grouchily agrees to drive her into Hollywood.

Along the way, however, they pass a large dog apparently struck by a car and she jumps out of the car, wanting to help the animal. Annoyed at the increasing interruptions to his daily routine, he follows her but discovers the dog already dead and Breezy, upset, runs off. However, Frank hears the seemingly lifeless animal whimper and, begrudgingly, lifts the wounded animal into his car.

That night, Breezy returns to Frank's home to pick up the guitar she'd left in his back seat. Once again, she makes herself at home, talking him into a meal and a place to crash for the night (it's raining buckets outside). Very gradually, Breezy's indefatigably sweet nature breaks through Frank's "black cloud," as she describes it. Amused by her childlike lack of self-awareness and innocence, and charmed by the unashamed joy she derives from the simplest of pleasures (like seeing the Pacific Ocean for the first time), the two become attracted to one another, despite their 30-year age difference.

Despite the fair amount of nudity, sex really plays but a small part in Breezy's story. Frank's married friend Bob (Roger C. Carmel) certainly fantasizes about a romance similar to Frank and Breezy's, but Frank at least thinks he likes living alone since his divorce, and extremely cautious about letting his strange relationship with Breezy get out of hand. The movie impressively avoids many of the clichés one imagines a story like this would find hard to avoid. The depiction of Breezy and her hippie friends is nonjudgmental and pretty accurate: an interesting subplot concerns a friend of Breezy's whose boyfriend is so controlling that she turns to drugs to numb her unhappiness. The relationship between Frank and Breezy is believable partly because neither Frank nor the film are sentimental.

William Holden excelled playing mostly unhappy, sometimes desperate characters hiding their deep dissatisfaction with life with a veneer of relaxed (breezy?) but biting cynicism. Peaking in middle-age, nearly all of Holden's best work, in movies like Sunset Blvd. (1950), The Bridge on the River Kwai (1957), The Wild Bunch (1969), and Network (1976) are all variations of this character. Heims originally conceived the part of Eastwood, but Holden was a far better, even ideal casting choice.

Kay Lenz, meanwhile, is perfect. Her looks and acting are similar to Barbara Hershey, to the point where I thought I was watching Hershey until the opening credits. Lenz, however, has a slightly different quality. Seen nude in the opening, pre-credits scene, it's clear Breezy is a fully-developed woman (boy howdy) and yet the actress, then nineteen years old, also has a strong, childlike quality. The writing, and Lenz's performance, make Breezy sweetly innocence but also presumptuous and sometimes a little annoying. She's a young woman not completely formed, unsullied (but not immune) by life's inevitable disappointments, all in contrast to Frank, who's all but drowning in them.

The film continually surprises with little moments that so capture the nature of love relationships that they're almost jarring. One of the best of these comes when Frank, bemused by Breezy's unfailingly generous spirit, can't fathom why anyone so willing to give away their love never seems to need any of it back. In that moment Holden so nails his character, a man without real love in his life for so long he doesn't know how to receive so much all at once, that Breezy most impresses.

Supplements include a new, appreciative audio commentary track by Howard S. Berger and C. Courtney Joyner, and a trailer.

Something of a revelation, Breezy is a film I'd unhesitatingly include in a list of director Clint Eastwood's Ten Best films. A DVD Talk Collector's Series title.

*Eastwood does appear in the film, however fleetingly, as an extra seen only in long shot, on a pier as Holden and Lenz walk by.