Kino // PG // September 1, 2020
List Price: $29.95
Review by Stuart Galbraith IV | posted September 16, 2020 | E-mail the Author
A slight but amusing comedy starring Monty Python's John Cleese, Clockwise (1986) is singularly British in some respects, particularly in how it contrasts Cleese's character, the fastidious headmaster of what Americans would call a public high school with the pompous private school headmasters he's so determined to impress. For this and other reasons the film was only moderately successful in the U.S., where its release was limited to the "art house" circuit. From this experience Cleese decided that his next film would carefully appeal to British and American audiences equally, the result being A Fish Called Wanda (1988), his most famous non-Python starring film. 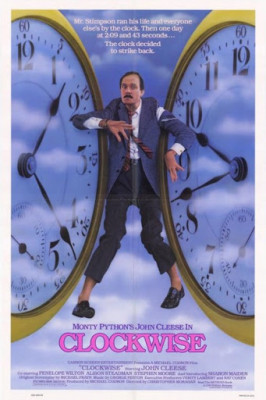 Written by playwright and novelist Michael Frayn (Noises Off), the story follows obsessively officious Brian Stimpson (Cleese), headmaster of Thomas Tompion Comprehensive School, a once disorganized, harried man who found religion in punctuality, running his school like clockwork, timing everything literally to the second.

His success there has won him a prestigious honor, the first "public" school headmaster ever to chair the Headmasters' Conference in Norwich, a position usually reserved for headmasters at upper-class places like Eaton and other top "private" institutions. However, after his wife, Gwenda (Alison Steadman, Life is Sweet, The Singing Detective), drops him off at the station, Stimpson accidentally boards the wrong train, leaving his speech behind as he unsuccessfully tries to catch the correct one. By this point his wife has already left for volunteer work at the local hospital, driving three dementia patients (Joan Hickson, Ann Way, and Constance Chapman) about, so Stimpson compels a truant student, Laura (Sharon Maiden), to drive him to Norwich (several hours away) in her father's automobile.

Filling up at the local petrol station, Gwenda spots the pair and, believing her husband is having an affair, follows them, the three seniors in her charge oblivious to what's happening. Also hot on their trail are Laura's parents, they believing their daughter has been kidnapped; music teacher Mr. Jolly (Stephen Moore), Laura's jealous secret lover; and the police (in the growing confusing, Stimpson forgot to pay for his fill-up). In the growing pandemonium, Stimpson really does all but kidnap Pat (Penelope Wilson, of Downton Abbey), a former girlfriend he meets along the way.

The film's humor, then, derives from Stimpson's meticulously-timed social-climbing plans going spectacularly awry, his attempts to maintain his dignity while single-mindedly determined to reach the conference by any means necessary. The feel of the enterprise is a bit like It's a Mad Mad Mad Mad World (1963) with three fewer Mads. Perhaps there's something in the fact that both stories were conceived by Englishman. Or that, for Stimpson, gaining entry into the world of elite snobbery is as valuable to him as 350Gs hidden in a box in Santa Rosita Beach State Park.

Cleese was right in surmising that much of the humor would be lost on American audiences, Cleese pointing to one example, Stimpson's frustration at a series of public telephones in varying states of inoperability, which got a big laugh in Britain but met with silence in America. In Britain, apparently, nobody expects public telephones to work.

A larger issue, however, is the subtle differences in education in England versus the U.S. Teachers and students use slang terms like "free time" (apparently referring to private study time) while Frayn's hilariously brutal portrait of elite headmasters, who among themselves obsess over money, wealthy-but-foreign donors, etc. - everything but education. Much of this material left American audiences more bemused than amused.

Nevertheless, Clockwise offered Cleese an ideal role, one who's increasing franticness recalls Basil Fawlty but, as Cleese himself points out in the extras, is contrastingly confident and articulate. Indeed, by the second half of the story Stimpson engages in desperate, even criminal acts (stealing cars, etc.) that one can easily imagine his Fawlty Towers character engaging it, but which strain credibility with an esteemed headmaster. The screenplay and Cleese's performance hints at but does not explicitly state that, by the end, Stimpson is experiencing a mental breakdown, but the ending seems at least partly a compromise between the film's star (who loved the script expect for the ending) and writer.

Licensed from StudioCanal, which did a 4K remastering, Clockwise looks great on Blu-ray, with strong color, good contrast, and an impressively sharp image throughout. The DTS-HD (mono) audio is better than fine and optional English subtitles are provided on this region "A" encoded disc.

Supplements apparently made for the UK release are repurposed here. They include an interview with Cleese, a featurette with the composer of the film's score, George Fenton, and a trailer. Also included is an audio commentary with writer Bryan Reesman.

Enjoyable if not especially memorable, Clockwise is Recommended.