Morgan - A Suitable Case for Treatment

Kino // Unrated // June 16, 2020
List Price: $29.95 [Buy now and save at Amazon]
Review by Stuart Galbraith IV | posted September 25, 2020 | E-mail the Author
For many years I was friends with an eccentric much like the title character in Morgan - A Suitable Case for Treatment (1966). He first came to my home where I had no snacks to offer him, me jokingly pointing to a nearby box of dog biscuits. "No problem, that's great!" said he, and he snacked on those. Like Morgan (David Warner), this friend was wildly unpredictable and occasionally destructive, often making those around him unwilling participants in his crazy behavior. Indeed, he seemed to thrive on making those around him squirmily uncomfortable, so while his antics were amusing some of the time, he quickly became more irritating than fun. Also, like Morgan, he had extreme political and religious views, reading much but comprehending little. (He could read but was otherwise semi-literate, and created his own original language when he needed to write something down. He could read his scribbling just fine, though it incomprehensible to anyone else.) Eventually this friend immersed himself totally in various religious groups, for a time the Hare Krishnas, and then later Buddhism and finally Islam, changing his name and all but losing his former identity in the process.

Morgan tells a similarly, darkly comic tale, but set in and filmed in the style of modish London. Stars David Warner and Vanessa Redgrave (she billed first in the opening credits, Warner billed first at the end credits) give outstanding performances but the movie hasn't aged well, its comedy and visual style more than a little forced and, especially toward the end, very pretentious and self-consciously arty. College-age viewers of the time mostly loved anti-hero Morgan but, perhaps colored by my own experiences, found him merely exasperating. 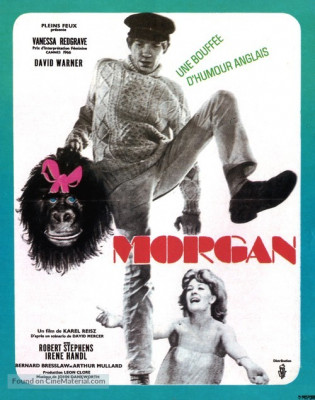 Wealthy Leonie (Redgrave) has divorced her working-class husband Morgan (Warner), a failed artist and failed Marxist revolutionary. She's already in the process of converting the house she owns, heretofore transformed into a Bohemian paradise by Morgan, into flats she can rent out, but Morgan refuses to leave, squatting and hoping he can win her back. Leonie, however, is already planning her next marriage, to stuffy art gallery owner Charles Napier (Robert Stephens).

The most interesting aspect of the film, both in terms of the writing and the performances, is that Leonie is not immune to Morgan's charms, especially sexually. While insisting on moving forward in her relationship with Charles, she repeatedly succumbs to Morgan's attempts to get her into bed.

Morgan's stunts to win her back fail spectacularly and unsurprisingly. At one point he wires the house with speakers, blasting animal noises from a reel-to-reel tape deck while Leonie and Charles try to spend a quiet evening there. He destroys expensive carpets, family heirlooms and the like painting or cutting the hammer and sickle symbol into them. At one point he sabotages Leonie and Charles's bed with small explosives, but it goes off when Leonie's mother (Nan Munro) sits on the bed instead.

Eventually Morgan is banished to living out of his Communist icon-decorated motorcar, which he parks on the street in front of the house, and later moves back in with his Marxist mother (Irene Handl, in another good performance). Morgan's mental state deteriorates with his personality fading beneath a gorilla costume he wears while crashing Leonie's wedding.

Morgan began as a 1962 episode of BBC Sunday-Night Play written by David Mercer and starring Ian Hendry as Morgan and Moira Redmond as Leonie. For the film, many adjustments were made in trying to appeal to a wider and younger audience with Morgan, for instance, changed from an older, failed writer to a younger, failed artist. Czech-born British director Karel Reisz (Saturday Night and Sunday Morning, The French Lieutenant's Woman) pulls excellent performances all-around, especially from the two leads, but his visual style draws attention to itself, with much (optically-printed) fast-motion intended to make the comic scene funnier, freeze-frames for punctuation, and so on.

As Morgan grows increasingly nutty, the film attempts to follow him down that rabbit hole, with surrealist scenes of Morgan, trapped in his gorilla costume, lost in a junk yard, eventually slipped into a straitjacket and put on trial, with much of the cast dressed like Russian revolutionaries. This kind of thing might have wowed college kids back in the day, but overwhelms with affectation now.

Licensed from StudioCanal, Morgan - A Suitable Case for Treatment received a 4K remastering, the black-and-white, 1.66:1 widescreen image in near-pristine condition, with only a few very minor imperfections. The DTS-HD (mono) audio is better than fine and optional English subtitles are provided on this region "A" encoded disc.

Supplements are limited to an audio commentary track by writer Bryan Reesman, but his track does a good job placing the film into context while also "reading" the film. It's one of Kino's better tracks.

More a cultural curiosity piece seen today, Morgan does boast exceptionally fine performances by leads near the beginnings of their careers, and it has its moments. Recommended.