Death on the Nile

Kino // PG // September 1, 2020
List Price: $29.95 [Buy now and save at Amazon]
Review by Stuart Galbraith IV | posted October 16, 2020 | E-mail the Author
Sidney Lumet's all-star but inexpensive film of Agatha Christie's Murder on the Orient Express (1974) had been an enormous critical and commercial success. It was nominated for six Academy Awards (with Ingrid Bergman winning for Best Supporting Actress), while the $1.4 million production ea ed $35.7 million at the box-office, a huge retu on such a modest investment.

Four more movies from the same producers followed, the first being Death on the Nile (1978), a glossy, entertaining murder-mystery. At around $8 million, it was far more costly but not nearly as good, and its box-office, roughly half that its predecessor, reflected this disappointment. John Guillermin directed instead of Lumet, while Peter Ustinov replaced Albert Finney as Belgian sleuth Hercule Poirot. 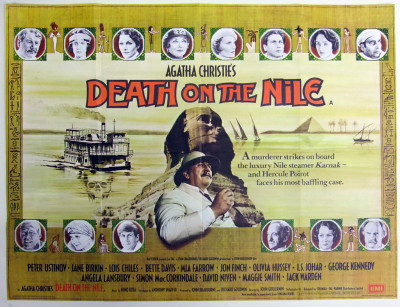 The structure of Orient Express is largely transposed here, with the story mostly confined to a paddle ship rather than a train, populated by a similarly star-packed list of passengers.

Despite Poirot's best efforts to deter Jackie from allowing the betrayal of her best friend and lover to ruin her life, she finally snaps and shoots Simon in the leg. Soon after, Linnet is found murdered, and all the evidence seems to point to Jackie. But she was under heavy sedation following the shooting, giving her an air-tight alibi. So then, who can the murderer be?

Albert Finney declined to appear in the sequel, and so was replaced by Ustinov. Though worldlier and physically closer to Christie's description of Poirot, Ustinov's approach to the character deviated pretty far afield from the character of the novels and short stories. Where Finney captured Poirot's eccentricities, particularly his temperament and fussiness, Ustinov sought to make the character "more human," almost to the point of being cuddly. While this serves to make Ustinov more approachable and likeable, it also makes for a much less interesting and distinctive Poirot. Where, like Sherlock Holmes, that combination of eccentricity and intelligence made Poirot a uniquely super sleuth, here he's merely a clever detective.

It's said that in a movie with one or two great performances, credit lies with those actors, while films in which all of the performances are good, the director deserves the credit. Lumet's Orient Express fell in the latter category, with even the smallish parts memorably played. In Death on the Nile, the acting is all over the map.

Angela Lansbury, for instance, hadn't made a movie in seven years, focusing on stage work since her mid-‘60s success in Mame. In Death on the Nile, while admittedly playing a flamboyant drunk authoress, it's as if she'd forgotten to readjust her emoting for the intimacy of the camera, playing to the back seats throughout. Actors like Jon Finch, Hussey, and MacCorkindale play their parts with contrasting seriousness. Others, like Bette Davis, David Niven, and Maggie Smith come off best, largely because they're veterans playing slight variations of their familiar screen personae. (Nevertheless, their scenes are the most entertaining in the picture.) In light of Farrow's decades-long battle with Woody Allen, her crazed stalker obsessed with ruining the lives of people she feels betrayed her today comes off as all too believable.

Lumet's film is impressively cinematic, particularly in its eerie prologue, introducing the audience to an earlier murder-kidnapping that would play a central part of the mystery to follow. Guillermin's direction, on the other hand, is almost lazy. He leaves it to the great cinematographer Jack Cardiff to capture money shots of Egypt's monuments and the like, while giving too much latitude to his cast. Revelations in Orient Express were accompanied by stinging visual flourishes, and Lumet's camera is always focused on just the right actor at the right time. Here, it's mostly picture postcard views of Egypt, playing out without much visual flair.

A big, unfortunate change made in Death on the Nile are scenes where Poirot imagines how each suspect might have murdered Linnet, one after the other, matter-of-factly shot and undistinguished from the "real" parts of the narrative. These suppositions add nothing and are merely repetitive.

But Christie's original story is quite clever, with an outrageous yet believable solution to its mystery. The film is more graphically violent than Orient Express, still on a PG-rating level, but slightly surprising.

Licensed by StudioCanal to Kino, Death on the Nile is presented in 1.85:1 widescreen, using a 2K master apparently identical to earlier UK and Japan versions. While far from Cardiff's best work, the cinematography is a major asset, and looks great on big screens, the image boasting good color, sharpness, and contrast. The English DTS-HD 2.0 (mono) audio is impressive for what it is, and ptional English subtitles are provided on this Region "A" encoded disc.

Supplements include a new commentary track by Howard S. Berger, Steve Mitchell, and Nathaniel Thompson; a 25-minute "making-of" featurette, the kind of thing that sometimes ran after network movie showings and/or in syndication; Spanish television interviews with Ustinov and Birkin, filmed presumably during production; and two trailers.

The law of diminishing retu s applies to this series of Agatha Christie movies, which never get terrible but overall decline steadily. (The others are 1980's The Mirror Crack'd, 1982's Evil Under the Sun, and 1988's Appointment with Death.) But the 1984 Miss Marple and 1989 Poirot series, on television, served the Christie stories splendidly, leading to a revival that continues to this day. As for Death on the Nile, despite its problems, is still Recommended.