Kino // Unrated // September 29, 2020
List Price: $24.95 [Buy now and save at Amazon]
Review by Stuart Galbraith IV | posted October 12, 2020 | E-mail the Author
Billy Wilder's second Hollywood movie as a director, Five Graves to Cairo (1943) doesn't have the stellar reputation of a Double Indemnity, Sunset Blvd. or Some Like it Hot, but is an impressive accomplishment that deserves to be better known. Following his (U.S.) directorial debut, the popular The Major and the Minor (1942), Wilder briefly toyed with another comedy, but shelved that project, shrewdly seizing upon something completely different. In so doing, he avoided being typecast as a director of such films. Seeing these two films back-to-back, Five Graves making its Blu-ray debut soon after The Major and the Minor, one is left with the impression that Wilder was a writer-director capable of almost anything. rn

rnIndeed, Five Graves is unlike anything else Wilder ever made. It's less like, say, his later Stalag 17 (1953) and closer to something like Zoltan Korda's excellent and atypical war film, also set in North Africa, Sahara (1943). It also resembles a few other early wartime films like Casablanca (1942) in its extraordinary timeliness. While Wilder and frequent collaborator Charles Brackett were adapting Lajos Biro's Hotel Imperial, already filmed twice before, the African Campaign was not going well for the Allies, yet like Casablanca before it by the time of its release the Allies had won out, and stories about such far-flung places were heavily covered in the American press. rn

rnWilder hoped to get Cary Grant for the lead but had to settle on mid-level name Franchot Tone, yet it's probably for the best Wilder couldn't acquire Grant's services. All things being equal, it would have been impossible for movie audiences to completely immerse themselves in Five Graves' gripping story, as Grant's scintillating screen persona would have been hard to shake off. Tone, arguably even slightly better an actor than Grant if far less commanding of the screen, has an everyman quality that accentuates his improbable hero character. rn 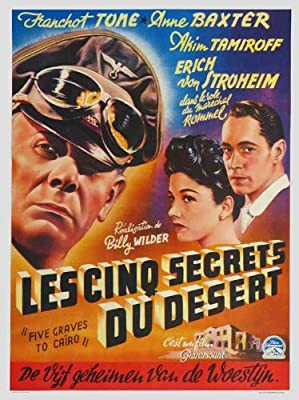 rnTone is Corporal John Bramble, the sole survivor of a British tank crew following the capture of Tobruk in June 1942. Exposed to poisonous exhaust fumes and lost in the desert, he barely makes it on foot to the North African coastal town of Sidi Halfaya, a recently deserted British outpost. Delirious and suffering from exhaustion, he stumbles into the Empress of Britain, a hotel owned by Arab Farid (Akim Tamiroff). The only other person there is French chambermaid Mouche (Anne Baxter), who resents Bramble's presence and Farid's efforts to hide him once the Germans roll in. rn

rnHowever, they're able to convince Lt. Schwegler (Peter van Eyck) that Bramble is cub-footed waiter named Davos, killed the night before by German bombing, his body buried under rubble in the basement. Bramble seals the deception by not only wearing Davos's waiter clothes, but also his heavy, custom-made clubfoot shoe. rn

rnSoon after, no less than Field Marshal Erwin Rommel (Erich von Stroheim) turns up, and in a clever twist it turns out the real Davos had been a German spy, but as none of the Germans have met Davos face-to-face, he's able to fool the Germans into revealing priceless strategic information. What's Bramble to do? Assassinate Rommel? Escape with Rommel's plans for his next assault? Will Mouche, anxious to free her brother from a German concentration camp, go along with Bramble's plans? rn

rnWilder, of course, was most acclaimed for his razor-sharp comic dialogue and rarely appreciated for considerable talents as a visual storyteller. Yet Five Graves opens brilliantly and entirely visually, with no dialogue at all. The tank chugs across the sand dunes, up and over crests, a lifeless body at the hatch eerily jerking forward and back. The entire sequence, up to Bramble near death upon arriving at the hotel, is a visual tour de force. Inside the hotel, Wilder and cinematographer John F. Seitz (Double Indemnity, Sunset Blvd.) keep the hotel in extreme low light, a sharp contrast to the deliberate heat-suggesting shimmer of the exteriors, brilliantly using the big, seedy hotel set, filming at interesting angles, sometimes through lattices and textures of material. rn

rnIn his insightful biography of Wilder, writer Ed Sikov only finds fault with Anne Baxter's performance, particularly her allegedly overemphatic French accent, but I think she comes off well playing a character embittered by Allied Forces she feels deserted her family. Baxter had one of those strange careers where she started out promisingly, giving fine performances in films like Welles's The Magnificent Ambersons (1942), but gradually her work became more stilted and unnatural. This was put to good effect in movies like All About Eve, where self-consciousness was part of the character she played, while in other films, famously in The Ten Commandments, she was awful, unable to overcome or rise above that film's ludicrous dialogue. In Five Graves though, her performance is almost exactly right. rn

rnPeter van Eyck had occasionally sizable roles, perhaps most famously in The Wages of Fear (1953), but often was typecast as icy Nazis as here. Amusingly, Erich von Stroheim looks nothing like the real Rommel, but so dominates every scene he's in Wilder confidently introduces him from a high angle looking down only at the back of his thick, sweaty neck: 1940s audiences recognized him with only that, and as Wilder himself commented, the back of von Stroheim's neck was a better actor than most Hollywood stars. rn

rnLicensed to Kino by Universal, keppers of the pre-1948 Paramount library, Five Graves to Cairo looks splendid, its richly textured 1.37:1 standard, black-and-white image derived from a new 4K master. It looks better than 35mm theatrical prints probably looked in 1943. The English DTS-HD (mono) audio is impressive for what it is, and optional English subtitles are provided on this Region "A" encoded disc. rn

rnA trailer for this and Wilder movies are included, but the real treat here is a new Audio Commentary by film historian Joseph McBride, who knew Wilder well and even visited the set of The Front Page (1974), one of his last films. As someone who's done his share of commentary tracks, I can only marvel at McBride's ability to at least appear to be speaking extemporaneously, yet from beginning to end his track is loaded with amusing anecdotes, insightful personal reminisces, historical context and, overall, scads of valuable, observant information. Kino's commentaries vary widely but this one is well worth the listener's time. rn

rnI'm not all that fond of Billy Wilder's first Hollywood film as director, The Major and the Minor, but Five Graves to Cairo is just about perfect, and for its fine transfer and Joseph McBride's fine audio commentary track, this is a DVD Talk Collector's Series title. rn