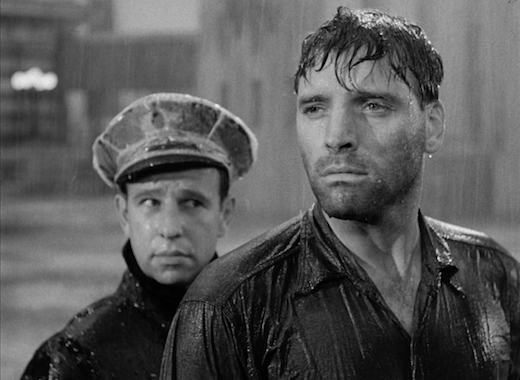 The 1947 film noir prison drama Brute Force was only Burt Lancaster's second screen appearance (after The Killers, also for producer Mark Hellinger), but it already presents him fully formed as a tough-guy icon. As inmate Joe Collins, Lancaster consistently projects potential violence from his steady stoic demeanor. All of his movements are tight and controlled, as if to prevent an inevitable and destructive outpouring of anger.

It's no surprise, then, that Collins wants to bust out of prison before he snaps. His sweetheart Ruth (Mildred Pierce's Ann Blyth) is so distraught over him that she refuses to get treatment for her cancer. Meanwhile, the well-meaning but increasingly ineffectual warden (Roman Bohnen) is being slowly usurped by the authoritarian guard Captain Munsey (Hume Cronyn), whose Machiavellian manipulations make life hell on the cell block. Cronyn's soft spoken sadist is one of the most ingeniously realized and boo-worthy villains to appear in the movies.

Brute Force's director is Jules Dassin, who would later make the classic heist movie Rififi. His talent for working with a male-heavy ensemble is obvious here, in the natural camaraderie between the inmates all jammed into cell R17 along with Lancaster's Joe Collins. They become conspirators in Collins's prison break attempt, although their efforts are overshadowed by the fatalistic sense that the whole thing is doomed from the start.

Dassin and screenwriter Richard Brooks (Blackboard Jungle) smuggle plenty of political commentary into Brute Force. Art Smith's alcoholic prison doc is the film's soothsayer and conscience. His warnings to Captain Munsey about the hunger for power and the double-edged nature of the titular "brute force" make the film's anti-fascist and anti-authoritarian viewpoints explicit. While the film lays it on a touch thick to make sure the folks in the back don't miss the message, the preaching is effectively integrated into the bleak patchwork of the story.

Flashbacks to life on the outside -- specifically to the women who made life worth living (played by Blyth, Yvonne De Carlo, Anita Colby, and Ella Raines) -- not only provide motivation for the prisoners, they give us a sense that these are essentially regular joes who are more victims of circumstance than cold-blooded criminals. Charles Bickford plays a centrist inmate who helps keep the peace in the prison until the authorities screw him over.

The looming threat of violence comes to fruition in the film's final act. First, as Munsey brutalizes a would-be messenger (played by likable character actor Sam Levene) in search of info about the impending prison break, and finally, during the break itself. The men finally act on their simmering hatred, and it detonates with shocking intensity. The concluding sequences are exciting, but there is less the choreography of typical action filmmaking and more the nerve-jangling tension of utter chaos.

The note that viewers are left with feels oddly nihilistic for a message movie, but the sharpness of Dassin's filmmaking and the intensity of the performances will keep Brute Force rattling around in your head longer than a lot of slicker pictures. 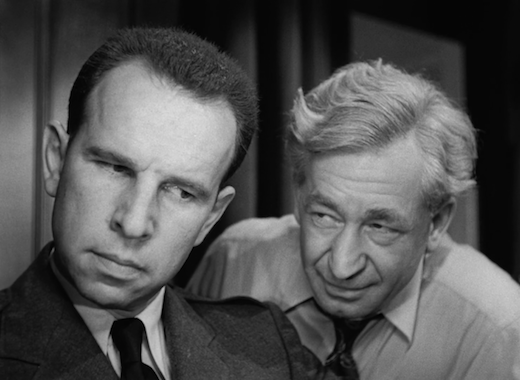 The Blu-ray
Brute Force is packaged with a booklet featuring an essay by Michael Atkinson, plus a 1947 magazine profile of producer Mark Hellinger, and correspondence between Hellinger and Hays Code censor Joseph Breen.

The Video:
Sourced from a meticulous 4K restoration, this AVC-encoded 1080p 1.37:1 presentation is outstanding. An opening title card describes the piecemeal nature of finding workable elements to create this new edition, which makes the consistency of the end product all the more impressive. Excellent depth and detail, with rich blacks and plenty of subtle nuances in the shadows. A nicely textured look with well-resolved film grain. A first-rate transfer.

The Audio:
The LPCM mono audio is similarly impressive in its restoration. Dialogue is clean and clear without sacrificing ambience (a downpour of rain is an early sound motif). Miklos Rosza's intense score is well-supported and doesn't get crispy on the high end. An optional English SDH track is included.

- Carried over from Criterion's 2007 DVD, this is a throughly engaging and well-researched dive into the history of the film and its makers. 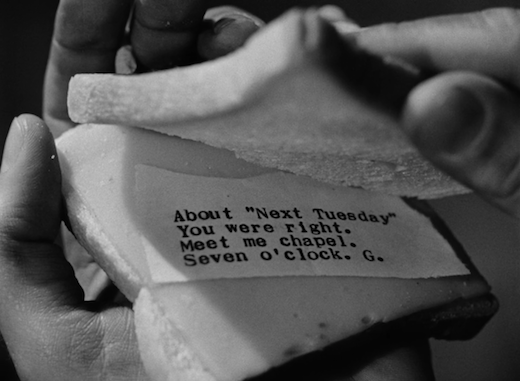