Cat and the Canary, The

Kino // Unrated // September 15, 2020
List Price: $24.95 [Buy now and save at Amazon]
Review by Stuart Galbraith IV | posted October 26, 2020 | E-mail the Author
One of Bob Hope's first starring features, The Cat and the Canary (1939) utilizes his still-forming screen persona in ways that would subtly vanish within a few years, and his performance is slightly different also. The story, already filmed before as a 1927 non-comic silent feature, is surprisingly atmospheric, even creepy at times, another pleasant surprise.

As a child I loved Bob Hope comedies yet, for reasons I can't quite put my finger on, these days even his best films tend to disappoint while his worst films (pretty much everything after Road to Hong Kong particularly) are nearly unwatchable. His delivery of comic dialogue and much of his physicality was peerless, and the films he made at Paramount and, sometimes, elsewhere, are generally slicky, even lavishly produced, but nowadays I often find them and him rather soulless nowadays, like Teflon.

But The Cat and the Canary is a treat all around, and Kino's new Blu-ray looks great. 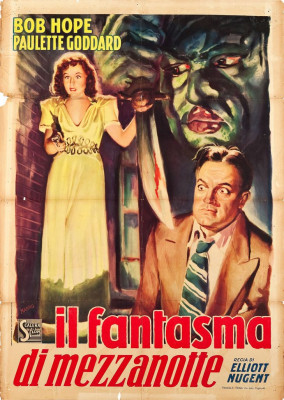 The will is read, with Joyce inheriting Norman's fortune. However, the will also stipulates that the young heiress must not be declared insane over the next 30 days, or the fortune will be passed on to Norman's second-choice, whose identity Crosby keeps in a sealed envelope. All this suggests the others might try to murder or drive Joyce insane during the night.

Meanwhile, a security guard, Hendricks (John Wray) tu s up, informing all that an insane murderer known only as "The Cat" has escaped from a nearby lunatic asylum, increasing tensions further. Who will survive the night?

Hope gets top billing over Paulette Goddard, she, no doubt, brought into the project as insurance. Prior to this, Hope had been billed second after Martha Raye on two pictures, and top-billed twice before over lesser name Shirley Ross, his co-star in Thanks for the Memory (1938), the movie that introduced his signature song. The Cat and the Canary offered insurance of another sort, that property already having been a successful Broadway play and the aforementioned 1927 film, the latter already remade once before as The Cat Creeps in 1930. The brief running time, just 72 minutes, also hints this was something of a "nervous ‘A'" that, had it not tu ed out as well as it did, could quietly be slipped to the bottom of a double-bill.

In later years, Hope was on autopilot, filming TV specials reading his monologues off cue cards, his slick comic delivery so set in stone by this point he could probably have done ‘em in his sleep. In Canary, however, the pristine timing is almost there, yet somehow Hope comes off as a bit more human. In nearly all his later starring films Hope was a leering skirt-chaser, cowardly and often driven by greed. Here, refreshingly, he's more a regular Joe, a kidder to be sure, but flesh and bone. Absent are the in-jokes present in almost all Hope's later Paramount features nor, Zucco's coincidental character name aside, no references to later frequent co-star Bing Crosby.

Director Elliott Nugent (The Male Animal) keeps things moving at a good clip with no extraneous padding. Equally good is both he, cinematographer Charles Lang, and art directors Hans Dreier and Robert Usher generate a palpable level of suspense and horror on par with the best "straight" horror films of the period. Cinesavant reports that it's likely gorilla man Charles Gemora created the makeup for "The Cat," also very effective.

Licensed to Kino by Universal, keepers of the pre-1948 Paramount library, The Cat and the Canary looks terrific, its richly textured 1.37:1 standard, black-and-white image offering the kind of inky blacks that horror-comedies like this require. The English DTS-HD (mono) audio is impressive for what it is, and optional English subtitles are provided on this Region "A" encoded disc.

Supplements are limited to a new audio commentary track by film historian Lee Gambin and a trailer.

Many of Bob Hope's comedies don't hold up all that well, but The Cat and the Canary is just the ticket for Halloween season, and fun for the whole family. Highly Recommended.