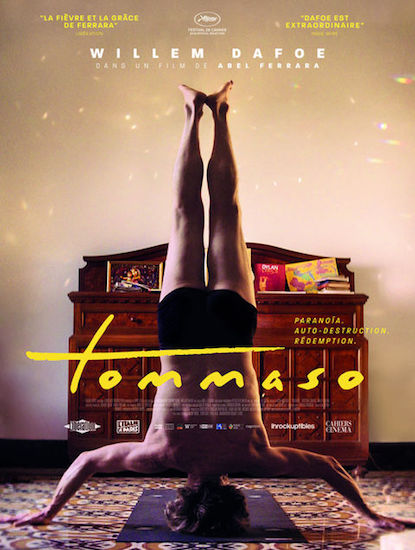 Willem Dafoe commands the screen in Abel Ferrara's new episodic film à clef, Tommaso. As the title character, Dafoe beautifully embodies a man searching desperately for balance and sobriety in spite of his nagging insecurities, rage, and desires. In constructing his narrative, Ferrara counterpoints loose and presumably improvised slice-of-life vignettes with hallucinations, delusions, and fantasies that blend so seamlessly into the film's reality that keeping track of what's "real" becomes essentially unnecessary.

Tommaso is a filmmaker prepping a new movie (Siberia, which Ferrara actually completed in real life this year). He spends most of his days fretting over a laptop in a cozy Rome apartment shared with his 29-year-old Moldovan wife Nikki (Cristina Chiriac, Ferrara's actual current wife) and his 3-year-old daughter Deedee (Anna Ferrara). Otherwise, he roams his neighborhood, takes Italian lessons, goes to AA meetings, practices yoga, and teaches an acting class.

Even within these fairly simple situations, Dafoe is able to consistently project a sense of someone who has fallen apart plenty of times before and is just trying not to slip again. Ferrara adds sequences from Tommaso's imagination which sometimes gild the lily: Tommaso makes out with a nude barista from his favorite coffee spot, he envisions his wife cheating on him with a more age-appropriate man, and -- unsurprising for a Catholic neurotic like Ferrara -- Tommaso sees himself as a reincarnated Jesus, misunderstood, hounded, and exploited.

Apart from the occasional absurdity of their premises, Ferrara does little to distinguish the imaginary sequences from the real. When we see Tommaso toe the sexual line -- and sometimes cross it -- with his Italian teacher or his acting students, it's hard to judge if he is really doing this or projecting an outlet for the pent-up sexual energy he is unable to release with his wife.

Abel Ferrara is an idiosyncratic auteur, to be sure, and Tommaso feels distinctly like him dumping the current contents of his mind on the screen, in the hope of making sense of it all. Dafoe's vital performance goes a long way toward making that struggle compelling, even sympathetic, but the film can't totally shake the sense of self-involvement and... well... onanism. The life of an artist can be spiritually brutalizing, but do we need an image of Tommaso sneering into the camera while crucified* outside a Rome metro station to make that point?

In other words: your mileage may vary.

*Was I expecting Dafoe to repeat, "It is accomplished?" Yes. Did he? Thankfully, no.

The Blu-ray
Tommaso is packaged with a booklet including color stills and an essay by Brad Stevens.

The Video:
The AVC-encoded 1080p 2.39:1 presentation has a consistently high bitrate which seems accurate to the way the film was shot. I make this distinction because certain shots and scenes in the film seem to have innate flaws due to what one must presume were pretty loose and improvisational shooting situations. In general, the film has a crisp and balanced look, but certain shots blow out in the whites or get indistinct in the blacks. A scene where Tommaso shoos a drunk vagrant away from the front of his building shows evidence of noise and pixellation. Various internet videos are interpolated into the film, and they are unsurprisingly blocky.

The Audio:
The soundtrack is available in both a spacious DTS-HD MA 5.1 surround mix and a more focused DTS-HD MA 2.0 stereo mix. The language of the film is English with some Italian and Moldovan. The disc defaults to an optional English subtitle track which translates most of the Italian. An English SDH track is also provided. Both mixes sound good with a strong low-end response that is particularly noticeable during a dance-music cue and in Dafoe's sporadic voice-over.

(HD, 53:10) - A Zoom interview facilitated by Film at Lincoln Center that originally streamed live on Youtube. As should be expected, there are freezes and technical snafus, but otherwise it's a pretty free-flowing chat between Ferrara and The Florida Project director Baker. Since they are also in the apartment, Cristina Chiriac discusses working with Willem Dafoe and young Anna Ferrara also makes an appearance.

Final Thoughts:
Tommaso is a loose and meandering rumination on what it is to return to humanity after being a "bad boy" for most of your life. Willem Dafoe's performance is a must-see, even when the film wanders down all-too-familiar or unpromising side streets. Maybe especially in those moments. As I said before, your mileage may vary but, for Dafoe alone, this comes Recommended.