Kino // Unrated // September 15, 2020
List Price: $24.95 [Buy now and save at Amazon]
Review by Stuart Galbraith IV | posted November 3, 2020 | E-mail the Author
Hot on the heels of The Cat and the Canary (1939), a modest enterprise that became a big hit, the same stars, Bob Hope and Paulette Goddard, were reteamed for The Ghost Breakers (1940), a more lavish, emphatically "A" production. An even bigger success, it solidified Hope as a major movie star attraction, while the film remains one of the very best horror-comedies.

Home video has not been kind to Ghost Breakers, with earlier official DVD releases looking quite poor, on the level of a public domain release. Kino's new Blu-ray, licensed from Universal (owners of the pre-1948 Paramount library) offers a new 2K remastering, but the results are still problematic. It's basically a good transfer of only fair elements. The image is clean with no scratches or obvious damage, but appears derived from a duplicate negative or something close to that. It lacks the exquisite detail, rich blacks, and excellent contrast of The Cat and the Canary. Ghost Breakers is watchable, and miles ahead of earlier DVDs, but still disappointing. 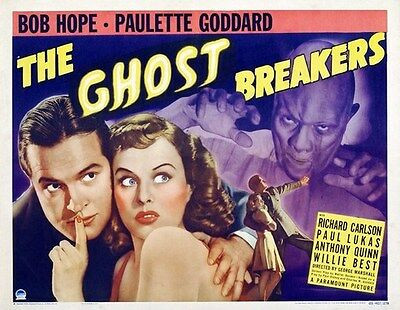 Kudos to the picture for opening with a spectacularly moody lightning storm in Manhattan, an atmosphere Ghost Breakers sustains for virtually its entire 83-minute running time. Crime reporter Lawrence Lawrence (Hope) is readying his final broadcast before going on vacation, a scoop that upsets crime boss Frenchy Duval (Paul Fix), whom Lawrence agrees to meet with at his hotel before departing.

Meanwhile, at the same hotel, Mary Carter (Goddard) inherits a supposedly haunted mansion in Cuba, the Castillo Maldito, signing the final transfer of the deed from Cuban solicitor Parada (Paul Lukas), who conveys an offer to buy the castle. She also receives a phone call from Mederos (Anthony Quinn) wa ing her not to sell. However, just as Lawrence arrives on Duval's/Mary's/Parada's hotel floor, Duval shoots Parada and, in the melee, Lawrence fires the pistol he brought along in case he ran into trouble with Duval, and thinks he's killed what he assumes to be a Duval henchman. The police arrive, and Lawrence hides in Mary's trunk, it and she bound for Cuba.

Onboard, in Mary's stateroom, Lawrence becomes protective of Mary, who's life seems to be in danger, he and his African-American valet, Alex (Willie Best), deciding to tag along, and to check out the haunted mansion before Mary puts her own life in danger.

As a Bob Hope vehicle, The Ghost Breakers is unusual. Despite his steady stream of nervous wisecracks, Hope atypically plays something like a brave hero character, rushing headlong into dangerous and/or scary situations without hesitation. When Dean Martin and Jerry Lewis starred in the remake, Scared Stiff (1953), it was Martin, rather than Lewis, essaying Hope's role, while Jerry played the Willie Best character.

Hope famously praised Best, calling him "the best actor I know," and, indeed, Best is working at Hope's high level throughout. Pretty clearly the huge success of Ghost Breakers and acclaim for Best's funny performance led to the casting of Mantan Moreland as Charlie Chan's chauffeur in the Monogram film series, and starring or co-starring roles in other Monogram horror titles.

The everything-but-the-kitchen-sink approach with the horror elements pays off, beginning with that insane lightning storm and continuing aboard the fog-shrouded ship and, finally, the overemphatically spooky mansion. It's unlike anything found in Cuba: to reach it, Lawrence and Alex (and later Mary) trek through a Tarzan's Africa-like jungle complete with anachronistic kookaburra. In the castle/mansion, there are ghostly apparitions, mummified bodies kept in glass coffins and, best of all, a genuinely creepy-looking zombie (King Kong's Noble Johnson) -- plenty of scary stuff for 1940 moviegoers. It's all pretty nonsensical, but it works.

Licensed to Kino by Universal, keepers of the pre-1948 Paramount library, The Ghost Breakers looks just okay on Blu-ray, an excellent transfer of inferior surviving film elements as noted in more detail above. The English DTS-HD (mono) audio is okay for what it is, and similarly problematic with minor audio issues. Optional English subtitles are provided on this Region "A" encoded disc.

As with Cat and the Canary, the new audio commentary track is hosted by film historian Lee Gambin. Also included is an appreciative "Trailers from Hell" with Larry Karaszewski and, finally, a trailer features footage of Hope not in the film.

It's disappointing that better film elements couldn't be tracked down for this Blu-ray presentation of The Ghost Breakers, but it's not a deal-killer, as it's perfectly watchable, just far from pristine. And the movie is too good to pass up. Highly Recommended.