Kino // PG // September 8, 2020
List Price: $29.95 [Buy now and save at Amazon]
Review by Stuart Galbraith IV | posted November 9, 2020 | E-mail the Author
A magical Weste (or, more accurately, Nor'weste , with most of its story set in British Columbia), The Grey Fox (1982) is just about perfect, and a very worthy undertaking for Blu-ray producers Kino, who gave the film a gorgeous 4K restoration and packed it with interesting extra features.

I'd seen it only once before, on cable TV, probably around 1984 or so, but watching it again was like a tonic. Mesmerizingly beautiful, methodically told, and anchored by an unforgettable central performance, The Grey Fox is often regarded as one of the Top Ten Canadian Films of All Time, a recognition it fully deserves. 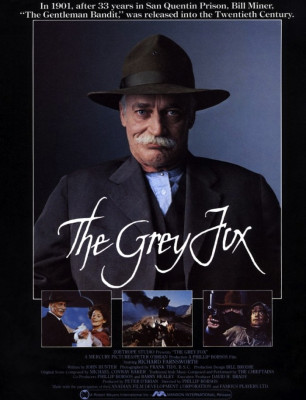 The movie traces, mostly quite accurately, the movements of real-life gentleman bandit Bill Miner, who robbed stagecoaches in the American West and reportedly originated the phrase "Hands up!" Unusually polite, he carried a gun but never killed anyone. Eventually captured, he spent years in San Quentin and the movie opens with his release in 1901.

At first Miner (Richard Fa sworth) goes to live with his adoring sister Jenny (Samantha Langevin) and her intolerant, unforgiving husband (Tom Heaton), but the tension there is palpable, and he doesn't care for the work available, like harvesting oysters off a fog-shrouded beach.

Director Phillip Borsos, then just 27 with only documentary short films to his credit, envisioned a feature with "less than a hundred lines" of dialogue, told primarily visually. The movie ended up with more dialogue than that, but what's there is gold. A saloon confrontation between miner and a pushy ex-con is tense and exciting, yet Miner hardly says anything. During production the filmmakers realized that Miner's romance with Kate (the film's one major dramatic license) was central to the story and beefed up their scenes together. The result is one of the most unexpected, satisfying romances ever in a Weste movie.

Still, Borsos and cinematographer Frank Tidy (The Duelists) soak in the British Columbian landscapes and authentic period atmosphere that's both indescribably beautiful while not forgetting the harsh working conditions of the times. Given today's short attention-span way of cutting movies, it's especially welcome to watch a film so contemplative of its surroundings. One can nearly smell the pines, the aromas of the train car interiors, and its smoke-filled saloons.

Borsos originally wanted Harry Dean Stanton to play Miner, but when financing came through Stanton had been cast in One from the Heart and was thus unavailable, though, apparently, it was he who suggested Fa sworth. A former stuntman whose career dates back to at least the Marx Bros.'s A Day at the Races (1937), Fa sworth anonymously appeared in such classics as Gunga Din, Gone with the Wind, Red River, Mighty Joe Young, and The Ten Commandments. Like other authentic cowboys who made movies, Ben Johnson and Slim Pickens to name two, Fa sworth eventually graduated to sizable supporting parts, the actor gaining attention for Comes a Horseman (1978) particularly, though he was also very good in films like Tom Ho (1980) and The Natural (1984).

Like Pickens and particularly Johnson, Fa sworth doesn't so much act as simply be. That wonderful face of his, with big, somewhat icy-blue eyes, and unexpectedly soft, gentle voice, reflects decades of life experience. Had Fa sworth been bo 75 years earlier, he might have been Miner. Harry Dean Stanton was a more versatile actor, but Fa sworth drips with authenticity in every scene.

Other good Weste s like Ride the High Country (1962) and The Shootist (1976) have placed 19th century cowboys and gunfighters in an increasingly unrecognizable 20th century West with its automobiles, electrical gizmos, moving pictures and the like, but The Grey Fox does this better than almost all other Weste s. Partly this is because Borsos insisted on period authenticity in the tiniest details, but I think also the reason this clash of old and new is so effective is because the Canadian wilde ess makes the contrast all the more striking. When Miner is startled to see an automobile coming around the co er, we in the audience are almost as startled as he is, it seems that out of place.

Kino's 4K remastering of The Grey Fox looks about perfect, with its sharp image, correctly-timed color and superb contrast. The English DTS-HD (mono) audio is also way above average. Though one wishes the film had been theatrically released in full stereo (better to complement the fine musical score) it's top-drawer for what it is. Optional English subtitles are provided on this Region "A" encoded disc.

The Grey Fox is a real treat, not to be missed. I liked it a lot when I saw it nearly 40 years ago, but was really bowled over seeing it via this new Blu-ray. A DVD Talk Collectors Series title.